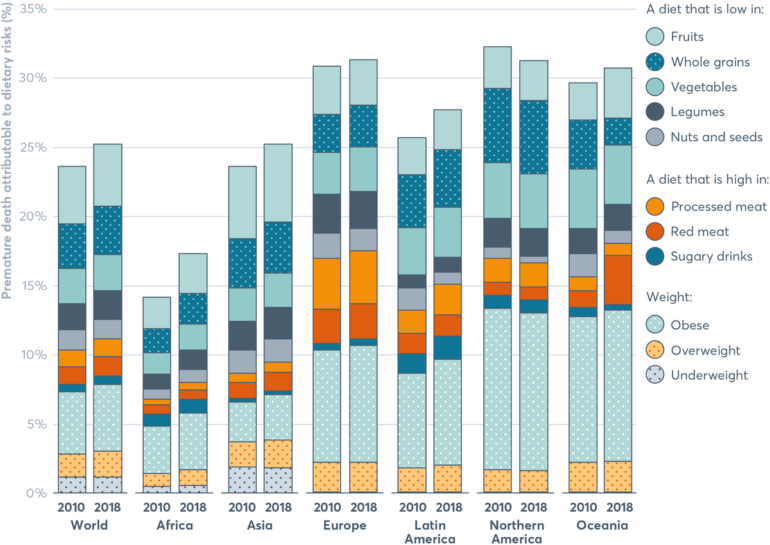 “The Dietary Guidelines for Americans are intended to provide science-based dietary advice that promotes good health and reduces major chronic diseases. Thus, it is critical to examine the associations between DGAs-recommended dietary patterns and long-term health outcomes, especially mortality,” said corresponding author Frank Hu, Fredrick J. Stare Professor of Nutrition and Epidemiology and chair of the Department of Nutrition.

The study will be published online January 9, 2023, in JAMA Internal Medicine.

Few studies have evaluated whether greater adherence to the DGAs-recommended dietary patterns is associated with long-term risk of total and cause-specific mortality. The researchers used health data collected over 36 years from 75,230 women participating in the Nurses’ Health Study and 44,085 men in the Health Professionals Follow-up Study. All participants were free of cardiovascular disease or cancer at the beginning of the study and completed dietary questionnaires every four years. Their information was scored based on each of the four dietary pattern indexes (Healthy Eating Index 2015, Alternate Mediterranean Diet, Healthful Plant-based Diet Index, and Alternate Healthy Eating Index). All share key components including whole grains, fruits, vegetables, nuts, and legumes, although other components differ across different eating patterns.

A higher score on at least one of the indexes was associated with lower risk of premature death from all causes, and from cardiovascular disease, cancer, and respiratory disease. Higher scores on the AMED and the AHEI were associated with lower risk of death from neurogenerative disease. The results were consistent for non-Hispanic white, non-Hispanic Black, and Hispanic people.

The current DGAs (2015–2020) recommend multiple healthy eating patterns that can be adapted to individual food traditions and preferences. An updated version of the Guidelines is released every five years by the U.S. Departments of Health and Human Services (HHS) and Agriculture (USDA).

“It is important to evaluate adherence to DGAs-recommended eating patterns and health outcomes, including mortality, so that timely updates can be made,” said Hu. “Our findings will be valuable for the 2025-2030 Dietary Guidelines Advisory Committee, which is being formed to evaluate current evidence surrounding different eating patterns and health outcomes.”

Ultra-processed foods may be linked to increased risk of cancer