How to watch UFC 261: live stream Usman vs Masvidal (and the rest) online right now 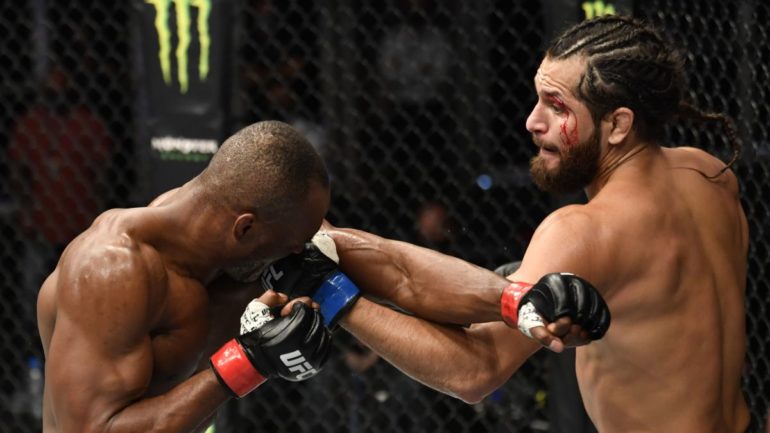 Rematches seem to be in vogue at the moment, and UFC 261 is no different. Tonight sees two Welterweight giants head back to the Octagon for another shot at each other at a full capacity VyStar Veterans Memorial Arena in Jacksonville, Florida. You’re in the right place to discover how to watch a UFC live stream and watch Usman vs Masvidal 2 online today – with ESPN+ having exclusive coverage in the US.

The two fighters’ first encounter came back in September last year at UFC 251 in Abu Dhabi, where reigning champ Usman outclassed Masvidal to clinch an unanimous points victory in what was the Nigerian Nightmare’s second defence of his belt.

UFC 261 live stream: how to watch Usman vs Masvidal in the US

See UFC 261 exclusively on ESPN+ PPV
The exclusive rights for US coverage is with ESPN Plus UFC, meaning it is the one place to watch it. The main card starts at 10pm ET / 7pm PT, with Usman vs Masvidal expected to enter the Octagon some time from 12am ET / 9pm PT – depending on the pace of the other fights.

There are three options on cost, which depend on whether or not you already subscribe to the service.

If you already enjoy the fruits of ESPN Plus, then it’s very straight forward. It’s a classic pay-per-view scenario, and you’ll need to spend $69.99 to watch UFC 261.

If you don’t yet subscribe to ESPN Plus, then you can take advantage of this great value offer. You’ll need to go for the UFC Bundle, costing you $89.98. That gets you both the UFC 261 PPV and a year-long subscription to ESPN+ that would normally cost $60 alone!

Your final option is to buy access to UFC 261 for $83.98 and, with it, get one month of access to the Disney Plus Bundle. So that’s a jam-packed 30 days of everything on Disney Plus – think all of Marvel, Pixar, The Simpsons, Star Wars and stacks more – the full catalog of live sports and documentaries on ESPN+, AND the hundreds of box sets and films on Hulu.
View Deal

How to live stream UFC 261 without PPV in Europe

As we say, you’re kind of stuck if you’re in the US. It’s PPV or bust.

Not so in Europe – probably because it’s on during the middle of the night! Instead, it’s sports streaming specialist DAZN that has the rights.

So if you’re a UFC fan in any of Austria, Italy, Germany or Spain, then get yourself over to the DAZN website.

Even better news…you can actually watch absolutely FREE in certain regions (we can confirm that is the case in Germany, for example). That’s thanks to a 30-day free trial, that you can take advantage of if you’ve never had a subscription before.

How to watch Usman vs Masvidal: live stream UFC 261 in the UK

BT Sport has exclusive broadcast rights to UFC events right now, and the great news is that this weekend’s UFC 261 action won’t be a PPV event in the UK!

You’ll need to tune into BT Sport 1 for all the action from Florida, with the main show starting at 3am in the early hours of Sunday morning. Usman vs Masvidal are expected to enter the Octagon after 5am.

There are a host of pay-per-view providers offering a Usman vs Masvidal live stream in Canada this month.

You’ll find UFC 261 and Usman vs Masvidal available on PPV in Australia, with the main provider being Foxtel Main Event and will set you back AUD$54.95.

The main Usman vs Masvidal card is set to take place at 2pm AEDT on Sunday, April 25 which should mean that you won’t have to get up early to catch the main event.

Usman vs Masvidal are expected to make their way toward the Octagon around 4pm.

Usman vs Masvidal live stream: how to watch UFC 261 in New Zealand now

Sky Arena is offering New Zealand viewers a Usman vs Masvidal live stream – with the PPV priced at NZ$39.95 for all the main card action.

You’ll want to make sure you’re watching from at least the 4pm NZDT main card start time on Sunday, April 25 to get all the action.

The headline Usman vs Masvidal fight is expected any time from 6pm NZDT, depending on how the rest of the card plays out.

When is Usman vs Masvidal? UFC 261 date and time

Usman vs Masvidal 2 preview and predictions

Masvidal will hope second time’s the charm and will be hoping to give a better account of himself this time out after his rushed preparations in facing Usman last time out.

Our MMA pundits at Tech Radar towers, however feel that stepping in at short notice was Gamebred’s best chance of beating the Nigerian Nightmare, with the more accomplished Usman now also able to prepare against a fighter that no longer has that unknown quantity often required to pull off a shock against a UFC big gun.

Who is Kamaru Usman?

Having chalked up 17 straight MMA victories, Kamaru Usman is one of MMA’s best grapplers and took the welterweight crown from Tyron Woodley in 2019 at UFC 235.

While the Nigerian star is known for his floor work, he can punch his way out of trouble when needed, and perfectly illustrated his fists as a means of attack during his dramatic final round stoppage over Colby Covington during the first defence of his title.

Who is Jorge Masvidal?

Despite his title defeat to Usman in his last fight, Jorge Masvidal remains one of the most high-profile fighters currently plying a trade in UFC.

His world-class take down defence is equally renowned – and his striking style should once again provide a fascinating counterpoint to the champ’s grappling.

Many MMA pundits felt his title shot last year against Usman was long overdue for such an experienced fighter who has also fought in the Bellator, Strikeforce, Shark Fights, and World Victory Road promotions.

Usman vs Masvidal 2 latest odds: who is the favorite to win?

Bookies are heavily favouring Usman once again to successfully defend his title  – meaning there are likely to be some tasty odds on a shock Masvidal win for those fancying Gamebred’s chances.

Usman cemented his position at the top of the 170-pound division by beating his former training partner Gilbert Burns at UFC 258 back in February.

Despite the Brazilian rocking Usman with a big right hand, the Nigerian recovered to end the fight in the third round via TKO following a precision jab and a succession of well-placed ground strikes.

Masvidal, meanwhile, hasn’t stepped into the ring since his last encounter with Usman on Fight Island , with the American fighter unable to find an answer to the champ’s powerful wrestling game last July, with Usman taking a unanimous 50-45, 50-45, 49-46 points decision.