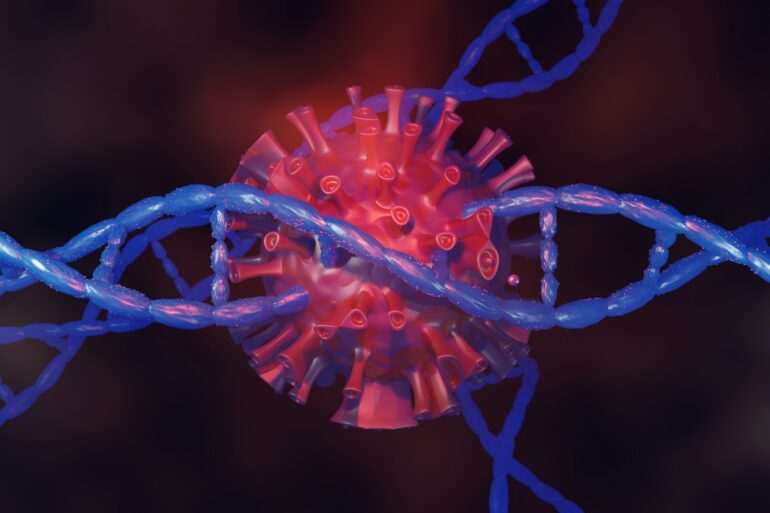 Remnants of ancient viral pandemics in the form of viral DNA sequences embedded in our genomes are still active in healthy people, according to new research my colleagues and I recently published.

HERVs, or human endogenous retroviruses, make up around 8% of the human genome, left behind as a result of infections that humanity’s primate ancestors suffered millions of years ago. They became part of the human genome due to how they replicate.

Like modern HIV, these ancient retroviruses had to insert their genetic material into their host’s genome to replicate. Usually this kind of viral genetic material isn’t passed down from generation to generation. But some ancient retroviruses gained the ability to infect germ cells, such as egg or sperm, that do pass their DNA down to future generations. By targeting germ cells, these retroviruses became incorporated into human ancestral genomes over the course of millions of years and may have implications for how researchers screen and test for diseases today.

Viruses insert their genomes into their hosts in the form of a provirus. There are around 30 different kinds of human endogenous retroviruses in people today, amounting to over 60,000 proviruses in the human genome. They demonstrate the long history of the many pandemics humanity has been subjected to over the course of evolution. Scientists think these viruses once widely infected the population, since they have become fixed in not only the human genome but also in chimpanzee, gorilla and other primate genomes.

Research from our lab and others has demonstrated that HERV genes are active in diseased tissue, such as tumors, as well as during human embryonic development. But how active HERV genes are in healthy tissue was still largely unknown.

To answer this question, our lab decided to focus on one group of HERVs known as HML-2. This group is the most recently active of the HERVs, having gone extinct less than 5 million years ago. Even now, some of its proviruses within the human genome still retain the ability to make viral proteins.

We examined the genetic material in a database containing over 14,000 donated tissue samples from all across the body. We looked for sequences that matched each HML-2 provirus in the genome and found 37 different HML-2 proviruses that were still active. All 54 tissue samples we analyzed had some evidence of activity of one or more of these proviruses. Furthermore, each tissue sample also contained genetic material from at least one provirus that could still produce viral proteins.

These Countries Got COVID-19 Under Control. Here’s 3 Things They Did Right

In Apps and WebSmartphones
on 4 November 20206 min read

The role of HERVs in human health and disease

The fact that thousands of pieces of ancient viruses still exist in the human genome and can even create protein has drawn a considerable amount of attention from researchers, particularly since…