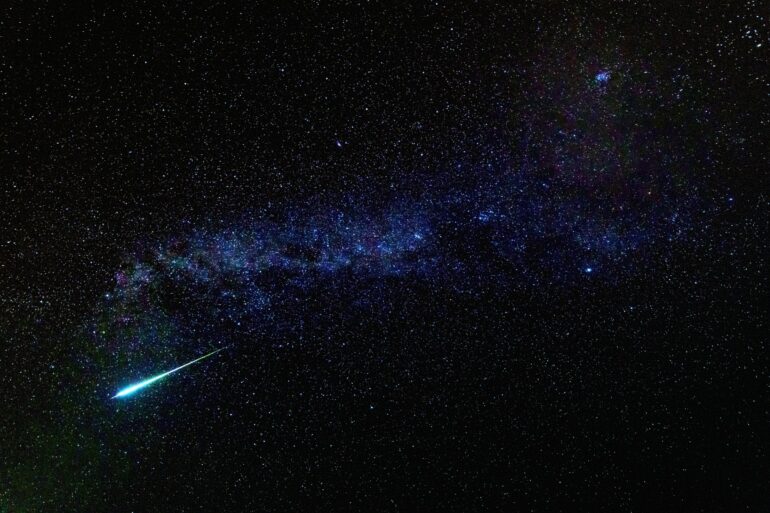 Meteors may help astronomers devise a new way to locate dark matter—mysterious and invisible particles that have so far only been discerned by the effect they have on the natural world.

Five times more prevalent than ordinary matter, dark matter makes up about 85% of the total mass of the universe, and about a quarter (26.8%) of the universe’s total mass and energy. Humans are unable to detect these elusive particles directly, as dark matter emits no light, so scientists use powerful instruments like the Hubble Space Telescope or NASA’s upcoming Nancy Grace Roman Space Telescope to witness its influence on galaxies and other distant star clusters.

Now, according to a study led by researchers at The Ohio State University, radar systems on the ground could be used to aid the search.

John Beacom, co-author of the study and a professor of physics and astronomy at Ohio State, said that while scientists typically look only for tiny particles of dark matter with small masses, the goal of this new research is to improve the search by helping to characterize macroscopic dark matter: particles with a large mass that might not reach traditional terrestrial detectors.

Though these particles can’t be touched or seen, dark matter can be perceived by its gravitational effects on other celestial phenomena, like stars or black holes.

While its effects on other natural systems aren’t easy to categorize, taking the time to learn more about dark matter opens up new avenues for scientists to understand the size, shape and future of the cosmos, Beacom said. Such detections can also reveal the mass of these particles—which, depending on their size, can have huge effects on the formation and structure of galaxies.

The research is currently published on the open-access preprint server, arXiv.

What makes the research so novel is that scientists applied the same technology that is used to track meteors as they streak across the sky. When passing through Earth’s atmosphere, both meteors and dark matter particles produce ionization deposits—a form of radiation that leaves behind free electrons, atoms capable of conducting electricity. Electromagnetic waves released by radar bounce off the free electrons, signaling the presence of otherworldly matter, which can then be used to distinguish dark matter from meteors. In this way, the entire planet’s atmosphere can be transformed into one efficient, large-scale particle detector.

Although scientists have used this method of meteor hunting for decades, Beacom said he was surprised that nobody had ever applied these systems, or their previously collected data, in the search for dark matter.

One of the study’s most significant conclusions is how the team’s new method could complement other cosmological searches for dark matter, as their system offers a level of accuracy and sensitivity many other techniques lack.

“Current cosmology techniques are pretty sensitive, but they don’t have a way to check their own work,” Beacom said. “This is a totally new technique, so if scientists are unsure about what they’ve detected, a signal from cosmology could be checked in detail with the radar technique.”

Co-authors were Pawan Dhakal, Steven Prohira and Christopher Cappiello of Ohio State, as well as Scott Palo and John Marino of the University of Colorado Boulder.