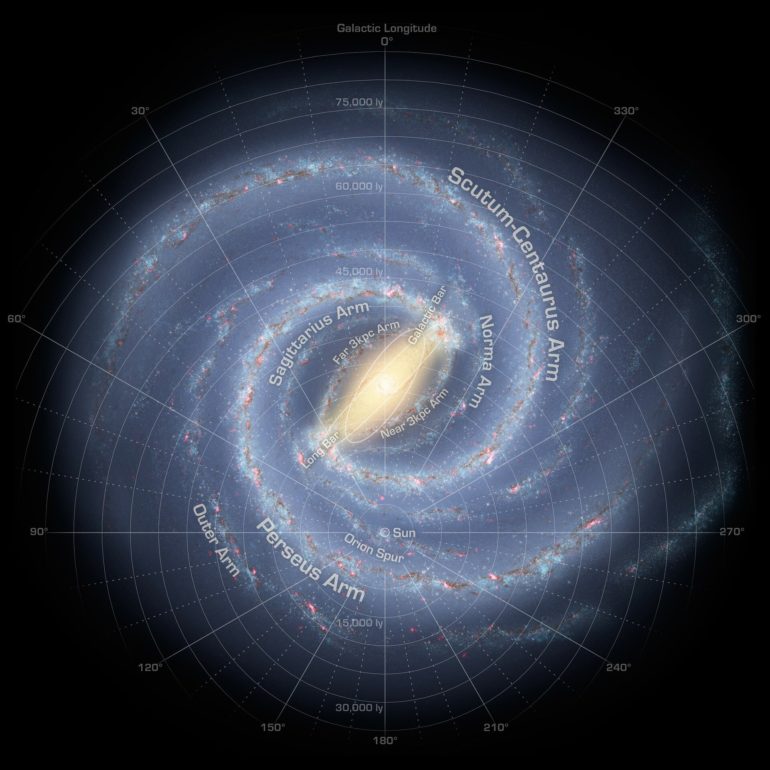 The latest observations from Insight-HXMT were published online in Nature Astronomy on Feb. 18. Insight-HXMT has discovered the very first X-ray burst associated with a fast radio burst (FRB) and has identified that it originated from soft-gamma repeater (SGR) J1935+2154, which is a magnetar in our Milky Way.

Insight-HXMT is the first to identify the double-spike structure of this X-ray burst as the high energy counterpart of FRB 200428. This discovery, together with results from other telescopes, proves that FRBs can come from magnetar bursts, thus resolving the longstanding puzzle concerning the origin of FRBs.

These results from Insight-HXMT also help explain the emission mechanism of FRBs, as well as the trigger mechanism of magnetar bursts.

This work was conducted by scientists from the Institute of High Energy Physics (IHEP) of the Chinese Academy of Sciences, Beijing Normal University, University of Nevada Las Vegas, Tsinghua University and other institutions.

FRBs, first discovered in 2007, are a great mystery in astronomy. They release a huge amount of energy in only several milliseconds. About a hundred such events have been detected in different regions of our universe. Moreover, repeated FRBs have been found from the same direction.

Considering the narrow field of view of radio telescopes, the event rate of FRBs is very high: Every day thousands of such bursts reach Earth. However, before this discovery by Insight-HXMT and several other space X-ray instruments, no FRB radiation at any other wavelength had ever been detected, and all FRBs with fairly good localization were from distant extragalactic sources, whose identity and nature are yet unknown. The origin and mechanisms of such mysterious phenomena constitute one of the biggest questions in astronomy today.

Scientists have proposed many models to explain the physical origin of FRBs, such as the merger of two compact objects, the collapse of a compact star, magnetar bursts, the collision of a neutron star and an asteroid, or even signals from aliens. In recent years, more observations have revealed more properties of FRBs, intensifying the debate on their origin.

In order to understand the nature of FRBs, we need to answer two questions: What is the source of FRBs, and what do FRBs look like in other wavebands?

On April 28, 2020 at 14:34 GMT, the Canadian CHIME experiment and the STARE2 experiment in the U.S. independently detected a very bright FRB, which was named FRB 200428. It came from roughly the same direction as the Galactic magnetar SGR J1935+2154. Based on the FRB’s dispersion measurement, the source of this FRB was located about 30,000 light-years away, which approximately agrees with the distance to SGR J1935+2154.

Magnetars are a group of neutron stars with extreme surface magnetic fields that are around 100 trillions of times stronger than the Earth’s magnetic field. When it’s active, a magnetar can emit bright short X-ray bursts. Therefore, theorists speculate that magnetars can also emit FRBs. In mid-April 2020, SGR J1935+2154 entered a new active period and hundreds of X-ray bursts were released.

In response to this opportunity, Insight-HXMT changed its observation plan and began a very long-duration pointing observation of SGR J1935+2154. About 8.6 second before FRB 200428, Insight-HXMT detected a very bright X-ray burst from SGR J1935+2154. This X-ray burst was also detected by the European satellite INTEGRAL, the Russian detector Konus-Wind and the Italian satellite AGILE.

The time difference is consistent with the time delay of the radio signal due to the interstellar medium. This indicates that the X-ray and radio emissions are from the same explosion.

Furthermore, Insight-HXMT was well able to localize this bright X-ray burst based on the unique design of its collimators, thus proving that both the X-ray burst and FRB 200428 originated from magnetar SGR J1935+2154. This represents not only the first confirmed source of an FRB, but also the first FRB originating in our Galaxy. It is a milestone in understanding the nature of FRBs and magnetars. The discovery of FRB 200428 and related research were recognized as one of the top 10 discoveries of 2020 by Nature and Science.

In comparison with observational data from other high energy satellites, the observational data on FRB 200428 from Insight-HXMT are the most statistically rich and cover the broadest energy band, thus providing the most detailed temporal and spectral information on the X-ray burst.

Insight-HXMT is one of two satellites that independently localized this X-ray burst, showing much greater accuracy than two radio telescopes that detected FRB 200428. Insight-HXMT also detected, in the light curve of this X-ray burst, two X-ray spikes very closely aligned temporally with the FRB, a result later confirmed by other satellite data.

Finally, Insight-HXMT is the only instrument providing data for detailed analysis of the spectral evolution of this X-ray burst. Specifically, the X-ray spectrum of these two spikes is significantly different from spectra from other parts of the burst as well as from the majority of X-ray bursts from magnetars. These results are critical to understanding the physical mechanism of FRBs.

Insight-HXMT is China’s first X-ray observatory in space. It was first proposed by LI Tipei and WU Mei of IHEP in 1993. Insight-HXMT is funded by the China National Space Administration and CAS. IHEP is responsible for satellite payloads, the science data center and scientific research. The China Academy of Space Technology is the builder of the Insight-HXMT satellite platform. Tsinghua University, the National Space Science Center, Beijing Normal University and other institutes have also contributed to the Insight-HXMT mission. The calibration of the detectors on board Insight-HXMT was supported by the National Institute of Metrology, Ferrara University in Italy and the Max Planck Institute for Extraterrestrial Physics.

Gorgeous Egyptian Art From 4,600 Years Ago Reveals an Extinct Goose

Since its launch on June 15, 2017, Insight-HXMT has successfully operated in orbit for more than 3.5 years. It has achieved a series of important scientific results on black holes, neutron stars and other phenomena.

As Insight-HXMT smoothly operates in orbit, the enhanced X-ray Timing and Polarimetry (eXTP) space mission, developed by IHEP and many other domestic and international partner institutions, has entered phase-B (design phase), after more than 10 years of preliminary study and key technology development. It will increase the capacity for studying neutron stars and black holes by an order of magnitude or more, compared with other similar satellites.

eXTP will bring China and the eXTP international consortium to the frontier of high energy space astronomy. The high energy counterparts of extragalactic FRBs are very weak due to their great distance. eXTP will be an ideal instrument for detecting them.