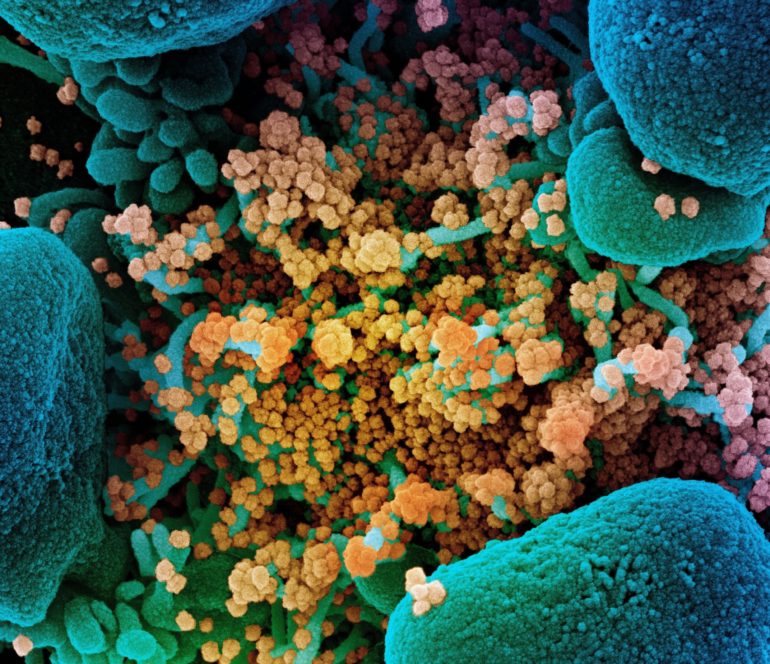 Scientists sequencing virus samples from the first confirmed cases of COVID-19 in Scotland (and through the first wave) have found evidence of community transmission, driven by multiple introductions through international travel, as early as February 2020.

In new research, led by the University of Glasgow and published in Nature Microbiology, researchers have been able to confirm that SARS-CoV-2, the virus which causes COVID-19, had multiple introductions to Scotland in early 2020, mainly from European countries such as Italy and Spain.

By looking at full genome sequences of SARS-CoV-2, the researchers found that the virus was introduced hundreds times during the first four weeks of the outbreak in Scotland, mainly from other European countries. The confirmed travel-associated introductions of SARS-CoV-2 into Scotland predated both UK travel restrictions and extensive restrictions in other European countries. Despite travel restrictions to mainland China coming into place at the end of January, the study shows that cases directly linked to Southeast Asia were rare in Scotland.

COVID-19 was first diagnosed in Scotland on the 1st of March. During the first month of the outbreak, 2641 cases of COVID-19 led to 1832 hospital 46 admissions, 207 intensive care admissions and 126 deaths. However as mass testing had not yet been introduced in the early stages of the outbreak, the true number of overall cases is certainly higher.

Researchers found that a number of the introductions of the virus were not associated with reported travel. These early introductions of the SARS-CoV-2 went undetected, and quickly established uncontrolled community transmission in Scotland. SARS-CoV-2 samples in Scotland analyzed included a range of virus variants, including D614G, a variant which has been associated with increased transmissibility.

The study also shows there was also a notable shift from travel-associated infection of younger adults to community transmission in older adults and healthcare workers within the first month of the epidemic in Scotland.

The study investigated the emergence of the virus in Scotland during March. The researchers obtained full genome sequences from 1314 individuals using next generation sequencing technology in real-time of 20% of all confirmed diagnoses of the disease.

Senior author, Emma Thomson, Professor of Infectious Diseases at the MRC-University of Glasgow Centre for Virus Research, said: “Our study confirms SARS-CoV-2 entered the Scottish population through at least 283 separate travel-related introductions, leading to multiple clusters of sustained community transmission. We identified viral lineages with no link to travel as early as three days after the first detection of infection, indicating earlier introduction to Scotland and community spread before the first detected case.”

“The emergence of continental Europe as the epicenter of the global COVID pandemic was a clear driver of the Scottish outbreak, with the majority of the lineages detected in this study related to European sequences. Cases with links to China and other countries in South-East Asia were comparatively not detected.”

“The speed at which the virus took hold in Scotland and the UK as a whole, following multiple introductions, mainly from other European countries, was extremely rapid. It is possible an earlier lockdown from countries with a high burden of cases, such as Italy, and other measures such as quarantine of travelers from high-risk areas, might have prevented escalation of the outbreak and multiple clusters of ongoing community transmission.”

“Tracking the new coronavirus using sequencing and genomic epidemiological analysis will help to inform our current response and the effect of public health interventions in real-time and is a tool that can be used to understand future infectious disease outbreaks of this nature.”

The genomic sequencing of pathogens, has become a core component of the epidemiological response to virus outbreaks, for example Ebola in the Democratic Republic of Congo or Zika in South and Central America. In this study, researchers at the MRC-University of Glasgow Centre for Virus Research who have been using this technology in Uganda switched to sequencing the SARS-CoV-2 virus in Scotland, alongside NHS partners at the West of Scotland Specialist Virology Centre, the Royal Infirmary of Edinburgh and researchers at the University of Edinburgh. The resulting data gives scientists enhanced knowledge of the origin and transmission of the disease, and by analyzing the introductions of COVID-19 in Scotland, the information on the extent and spread of the virus can help inform targeted public health interventions.

Prof Thomson added: “As the number of cases continue to rise in Scotland, our sequence data provide a baseline for real-time sequencing of ongoing infections, which can act as a measure for policymakers of the success of current measures including vaccination and contribute to the easing, or tightening, of public health measures.”

Dr. Kate Templeton, Consultant Clinical Scientist, University of Edinburgh, said: “The introduction of this sequencing approach has been a great collaboration between the University of Glasgow, University of Edinburgh and Public Health Scotland. The work in both Glasgow and Edinburgh for this study was only possible from joint working with University and NHS scientists. The ongoing work is reliant on contributions from NHS clinical and diagnostic laboratory staff across Scotland. Their efforts have helped us build up a truly national picture of the introduction and ongoing spread of the virus, and will provide important information to guide policymakers in how to respond to this pandemic.”

The study, “Genomic epidemiology reveals multiple introductions of SARS-CoV-2 from 3 mainland Europe into Scotland,” is published in Nature Microbiology.