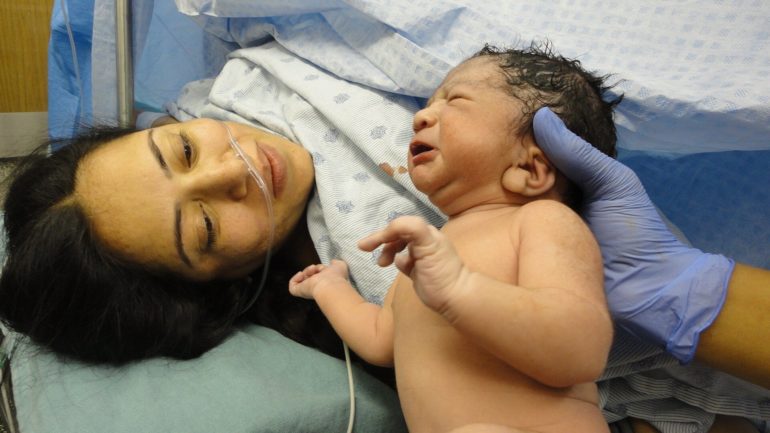 A new U.S. study of waterbirths found that hospital-based births involving water immersion had no higher risk of neonatal intensive care unit (NICU) or special care nursery admission than comparable deliveries in the control group without water immersion. The primary purpose of the study is to address the lack of methodologically sound research regarding maternal and neonatal outcomes for waterbirths. The study has been published in the journal, Obstetrics and Gynecology.

The American College of Obstetricians and Gynecologists (ACOG), the professional organization that sets standards for obstetric practice, previously concluded that water immersion during the first stage of labor (when a woman is in labor but is not fully dilated) is safe for women with full-term, uncomplicated pregnancies. In fact, water immersion during labor provides benefits of pain relief, reduced analgesic need, shorter labor, and increased patient satisfaction. However, ACOG also identified an absence of well-designed studies to aid in the determination of the risks and benefits of water immersion during the second stage of labor (when a woman is fully dilated and can actively push during contractions).

“This study demonstrates that the system we put in place provides waterbirth in the context of a strong clinical program that ensures safety,” said Dr. Lisa Saul, a perinatologist, president of Allina Health’s Mother Baby service line and study coauthor. “As a health system, we want to offer women as many choices as possible to help them manage pain during labor. Our primary focus is always on the safety of mothers and newborns so we need to ensure we are basing our practices on the best evidence available.”

In order to address the lack of quality research on waterbirth outcomes during the second stage, Allina Health led a multi-site study. The study includes data from 583 births over 4-years (2014-2018) from eight hospitals in the Allina Health and HealthPartners systems and a matched comparison group of 583 births to women who met the criteria for waterbirth but did not have water immersion during labor. As waterbirth has become more popular in the United States, it is important for practitioners to be able to inform their practices and guidelines in the context of U.S. clinical standards. Prior to this study, there were only a few studies examining waterbirth outcomes in the US, and those mostly focused on deliveries outside of a hospital setting (such as home births or birth centers).

Prior studies on waterbirths, conducted primarily in Europe, had varied clinical protocols that were often not described making it hard to understand how outcomes might be affected by clinical protocols. Additionally, prior studies often lacked strong study designs and thus were subject to potential sources of bias. The current study brings new methodological strengths not found in many prior studies, such as a large sample size and matching techniques used to ensure comparability between the women delivering in water and the comparison group. In alignment with ACOG recommendations, Allina and HealthPartners, established rigorous protocols for candidate selection, tub maintenance and cleaning, monitoring of women and fetuses, and moving women from tubs if maternal or fetal concerns or complications develop. The sites also developed rigorous training program to credential providers for water immersion deliveries, and a quality assurance process.

“Women and families deserve safe and evidence based care regardless of their birth preferences,” said Kathrine Simon, study coauthor, a certified nurse midwife and Midwifery Lead for Allina Health who conducts provider training for water immersion deliveries. “This study demonstrates that waterbirth is a safe option for women during labor in addition to supporting provider and nursing training and support.”

The study found that the proportion of deliveries with NICU or special care nursery admission was significantly lower for women with second-stage immersion (2.9%) than the control group (8.3%). There was no difference in NICU or special care nursery admissions for deliveries with first-stage immersion only. Of the secondary neonatal outcomes examined (i.e., respiratory distress, anemia, sepsis, asphyxia, or death), there were no significant differences between the water immersion groups and matched deliveries in the control group.

A possible benefit identified in the study for women was reduced likelihood of lacerations during delivery. Women in the second stage water immersion group were half as likely as women in the comparison group to experience any perineal lacerations. This measure did not differ for women who had first-stage only immersion cases.

“Women are often grateful for the opportunity for labor and birth in the water. Many are surprised by the lack of pelvic pressure and a sense of the baby gliding out,” said Simon. “This study confirms that waterbirths, conducted in alignment with a strong clinical protocol, are at least as safe as traditional birthing methods.”

Birthing pool not the place to deliver, new guidelines say

Has your food been chemically altered? New database of 50,000 products provides answers