Mathematical model to objectively analyzes the appeal of games 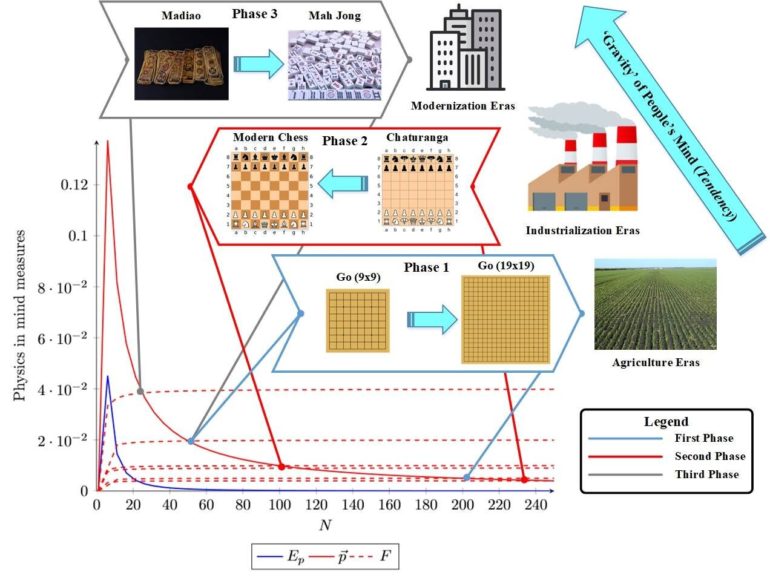 Games and the very act of playing have been around since before the cradle of human civilization. However, games have constantly evolved over time, with various rule sets and modes of play falling in and out of favor throughout history. In turn, this implies that people at different times enjoyed different aspects of each game, which may constitute a vivid reflection of the cultural tendencies of each era. Unfortunately, the attractiveness of games is tied to human psychology, and finding objective evidence in topics related to the realm of the human mind is a difficult task. Could there possibly be a way to quantify universal characteristics of games so as to put them under rigorous mathematical analysis?

Professor Hiroyuki Iida, vice president and trustee of the Japan Advanced Institute of Science and Technology (JAIST), thinks that there is. Under his guidance, the Iida laboratory has put much effort into developing theories and models that explain, using concepts from mathematics and psychology, what players enjoy about different games and why they feel motivated to play. Now, in their most recent study published in IEEE Access, scientists at JAIST have developed a novel approach to quantify the psychological appeal of games from a perspective analogous to the basic laws of motion in physics.

Ms Kang Xiaohan, Ph.D. student and lead author of the study, explains that their research is based on a combination of game refinement theory, reinforcement schedules and “motion in mind.” Game refinement theory is a methodology for assessing the enjoyment and entertainment value of a game based on variables such as uncertainty, match duration and difficulty. On the other hand, reinforcement schedules are a concept widely studied in psychology that explains how rewards and punishments (and their frequency) motivate specific human behaviors. In this case, a “reward” in the psychological sense can be winning a game in a given match. Finally, “motion in mind” is a novel theory pioneered at Iida laboratory, which proposes an analogy between physical measures of motion (such as potential energy, force and momentum) and game-related measures perceived by players, including pace of the game, effort required to progress, and randomness.

One key measure in the model of motion in mind is the acceleration or “gravity in the mind,” analogous with the earth’s gravitational acceleration. In sufficiently refined games, the model establishes a relationship between the effort that the player has to make to advance and the degree of challenge a game represents. The scientists calculated the gravity associated with a wide variety of games as they evolved through history, including classic board games like Chinese Go, Chess and Shogi, popular sports like soccer, tennis and basketball, and videogames, such as fighting games and strategy games.

Surprisingly, they found that the value of gravity in the mind changed, for each type of game, in sync with historical and cultural trends (Figure 1). For example, whereas people living 4000 years ago valued slow-paced games like ancient Go with a long period between rewards, the medieval and industrial era favored more aggressive and mid-paced games like Chess and Shogi (Figure 2). Similar trends were also found for various sports and videogames of the modern era. Excited about the results, Ms Xiaohan comments, “The gravity in the mind seems to be a good indicator of the core culture of people from a specific era or time. We can analyze how it changes to gain insight into people’s cultural tendencies based on the type of playing experience they seek and their relative comfort.”

The methodology and framework adopted in this study can be equally useful in other contexts where effort and motivation are critical factors, such as gamified activities, education and rehabilitation. It can also be used to analyze the nature of a given game or task so as to identify the psychological requirements for it, as well as the profiles of people that would be most comfortable or satisfied with it. In this regard, Prof Iida concludes, “We think the perspective of game-related research could shift naturally from the psychological realms to a more physical realm, making the generally complicated abstractions of the mind easier to understand.” One thing is certain: as our understanding of the appeal of games increases, so does our understanding of ourselves and our history.

Using games to study law of motions in mind

China ‘all in’ on its own crypto brand