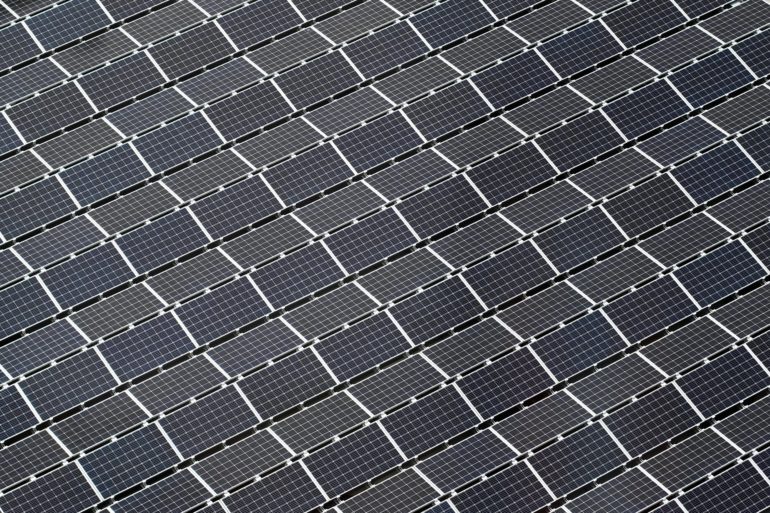 Puzzling out and testing new ways to improve the efficiency of cadmium telluride (CdTe) polycrystalline thin-film photovoltaic materials is a typical day in the life of National Renewable Energy Laboratory (NREL) research scientists Matthew Reese and Craig Perkins. Like any good puzzlers, they bring curiosity and keen observation to the task. These skills led them, over time, to make an intriguing observation. In fact, their discovery may prove to be a boon for the next generation of several different types of thin-film solar cells.

When fragments of solar cell material are crystallized together, or “grown”—think of a piece of rock candy growing in layers in a cup of sugar—they create a polycrystalline solar cell. With many layers come many surfaces, where one layer ends and another begins. These surfaces can cause defects that restrict the freedom of electrons to move, reducing the cell’s efficiency. As the cells are grown, researchers can introduce specific compounds that minimize the loss of electrons at these defects, in a process called “passivation.”

Reese, Perkins, and Colorado School of Mines doctoral student Deborah McGott noticed that the three-dimensional (3D) CdTe solar cells’ surfaces appeared to be covered in a very thin, two-dimensional (2D) layer that naturally eliminated surface defects. This 2D passivation layer forms in sheets on the 3D light-absorbing layer as the cell is growing, in a standard processing technique that is used around the globe. Despite the ubiquity of this 2D passivation layer, it had not been observed or reported in the research literature. Reese, Perkins, and McGott believed 2D passivation was also occurring naturally in other thin-film solar cells, like copper indium gallium selenide (CIGS) and perovskite solar cells (PSCs). They realized that this observation could lead to the development of new methods to improve the performance of many types of polycrystalline thin-film cells.

To confirm their hypothesis, they discussed it with NREL colleagues in the CdTe, CIGS, and PSC research groups. Through many informal discussions involving coffee, hallway chats, and impromptu meetings, Reese, Perkins, and McGott arrived at an “aha” moment. Their CdTe and CIGS colleagues confirmed that, while their research communities were not generally trying to perform 2D surface passivation in the 3D light-absorbing layer, it was, in fact, occurring. The PSC researchers said that they had noticed a 3D/2D passivation effect and were beginning to intentionally include compounds in device processing to improve performance. The “aha” moment took on even more significance.

“One of the unique things about NREL is that we have large groups of experts with different pools of knowledge working on CdTe, CIGS, and PSC technologies,” Reese said. “And we talk to each other! Confirming our hypothesis about naturally occurring 3D/2D passivation with our colleagues was easy because we share the successes and setbacks of our diverse research in an ongoing, informal, and collaborative way. We learn from each other. It is not something that typically happens in academic or for-profit-based polycrystalline thin-film solar cell research, where information is closely held, and researchers tend to remain siloed in their specific technology.”

The details of Reese, Perkins, and McGott’s discovery are presented in the article “3D/2D passivation as a secret to success for polycrystalline thin-film solar cells,” published in the journal Joule.

Supporting Evidence in the Literature

To confirm their findings, McGott conducted an extensive literature search and found considerable supporting evidence. The literature confirmed the presence of passivating 2D compounds in each of the CdTe, CIGS, and PSC technologies. No mention was made, however, of the 2D compounds’ ability to improve device performance in CdTe and CIGS technologies. While many articles on PSC technologies noted the naturally occurring 3D/2D passivation effect and discussed efforts to intentionally include specific compounds in device processing, none suggested that this effect might be active in other polycrystalline thin-film photovoltaic technologies.

Polycrystalline thin-film solar cells are made by depositing thin layers, or a thin film, of photovoltaic material on a backing of glass, plastic, or metal. Thin-film solar cells are inexpensive, and many people are familiar with their more unique applications. They can be mounted on curved surfaces—to power consumer goods, for example—or laminated on window glass to produce electricity while letting light through. The largest market for thin-film solar cell applications, however, is for CdTe thin film on rigid glass to make solar modules. CdTe modules are deployed at utility scale, where they compete directly with conventional silicon solar modules. Currently, commercial thin-film modules are generally less efficient than the best single crystal silicon solar modules, making performance improvements a high priority for polycrystalline thin-film researchers.

Reese, Perkins, and McGott’s team used surface science techniques combined with crystal growth experiments to show that the 2D layers existed at and passivated 3D absorber surfaces in the three leading polycrystalline thin-film photovoltaic technologies. They then analyzed the key properties of successful 2D materials and developed a set of principles for selecting passivating compounds.

Finally, the team outlined key design strategies that will allow 3D/2D passivation to be employed in polycrystalline thin-film photovoltaic technologies more generally. This is particularly important because each 3D material requires a specific passivation approach.

The literature results, combined with lab-based observations, show that 3D/2D passivation may be the secret to success in enabling next-generation thin-film solar cells, particularly if researchers freely share the knowledge developed for each technology. The lack of 3D/2D passivation may even shed light on the stalled performance improvements of some polycrystalline technologies such gallium arsenide. By drawing parallels between the three technologies, Reese, Perkins, and McGott hope to demonstrate how the knowledge developed in each can—and should—be leveraged by other technologies, an approach that is seldom seen in polycrystalline thin-film solar cell research.

One Apple platform in 2021: The year iPad and Mac begin to converge