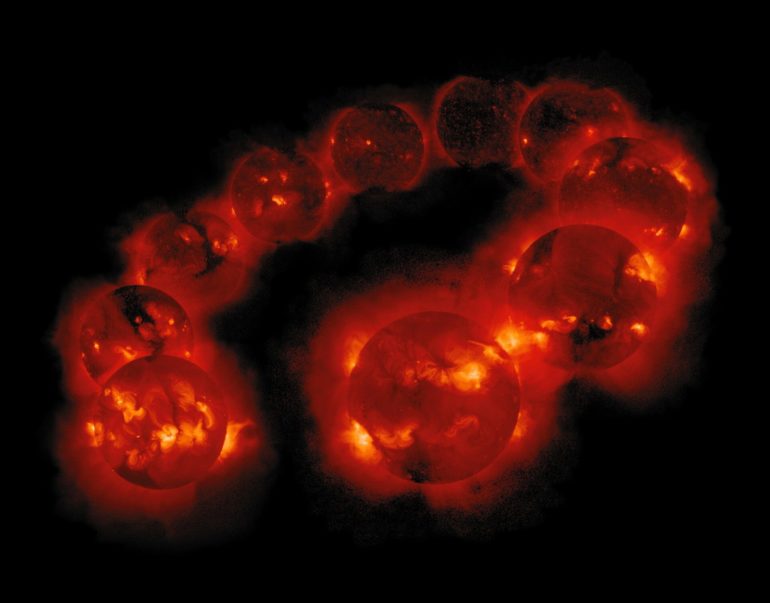 A new study shows a correlation between the end of solar cycles and a switch from El Nino to La Nina conditions in the Pacific Ocean, suggesting that solar variability can drive seasonal weather variability on Earth.

If the connection outlined in the journal Earth and Space Science holds up, it could significantly improve the predictability of the largest El Nino and La Nina events, which have a number of seasonal climate effects over land. For example, the southern United States tends to be warmer and drier during a La Nina, while the northern U.S. tends to be colder and wetter.

“Energy from the Sun is the major driver of our entire Earth system and makes life on Earth possible,” said Scott McIntosh, a scientist at the National Center for Atmospheric Research (NCAR) and co-author of the paper. “Even so, the scientific community has been unclear on the role that solar variability plays in influencing weather and climate events here on Earth. This study shows there’s reason to believe it absolutely does and why the connection may have been missed in the past.”

The study was led by Robert Leamon at the University of Maryland-Baltimore County, and it is also co-authored by Daniel Marsh at NCAR. The research was funded by the National Science Foundation, which is NCAR’s sponsor, and the NASA Living With a Star program.

The appearance (and disappearance) of spots on the Sun—the outwardly visible signs of solar variability—have been observed by humans for hundreds of years. The waxing and waning of the number of sunspots takes place over approximately 11-year cycles, but these cycles do not have distinct beginnings and endings. This fuzziness in the length of any particular cycle has made it challenging for scientists to match up the 11-year cycle with changes happening on Earth.

In the new study, the researchers rely on a more precise 22-year “clock” for solar activity derived from the Sun’s magnetic polarity cycle, which they outlined as a more regular alternative to the 11-year solar cycle in several companion studies published recently in peer-reviewed journals.

The 22-year cycle begins when oppositely charged magnetic bands that wrap the Sun appear near the star’s polar latitudes, according to their recent studies. Over the cycle, these bands migrate toward the equator—causing sunspots to appear as they travel across the mid-latitudes. The cycle ends when the bands meet in the middle, mutually annihilating one another in what the research team calls a terminator event. These terminators provide precise guideposts for the end of one cycle and the beginning of the next.

“We are not the first scientists to study how solar variability may drive changes to the Earth system,” Leamon said. “But we are the first to apply the 22-year solar clock. The result—five consecutive terminators lining up with a switch in the El Nino oscillation—is not likely to be a coincidence.”

In fact, the researchers did a number of statistical analyses to determine the likelihood that the correlation was just a fluke. They found there was only a 1 in 5,000 chance or less (depending on the statistical test) that all five terminator events included in the study would randomly coincide with the flip in ocean temperatures. Now that a sixth terminator event—and the corresponding start of a new solar cycle in 2020—has also coincided with an La Nina event, the chance of a random occurrence is even more remote, the authors said.

The paper does not delve into what physical connection between the Sun and Earth could be responsible for the correlation, but the authors note that there are several possibilities that warrant further study, including the influence of the Sun’s magnetic field on the amount of cosmic rays that escape into the solar system and ultimately bombard Earth. However, a robust physical link between cosmic rays variations and climate has yet to be determined.

“If further research can establish that there is a physical connection and that changes on the Sun are truly causing variability in the oceans, then we may be able to improve our ability to predict El Nino and La Nina events,” McIntosh said.

New sunspot cycle could be one of the strongest on record, new research predicts