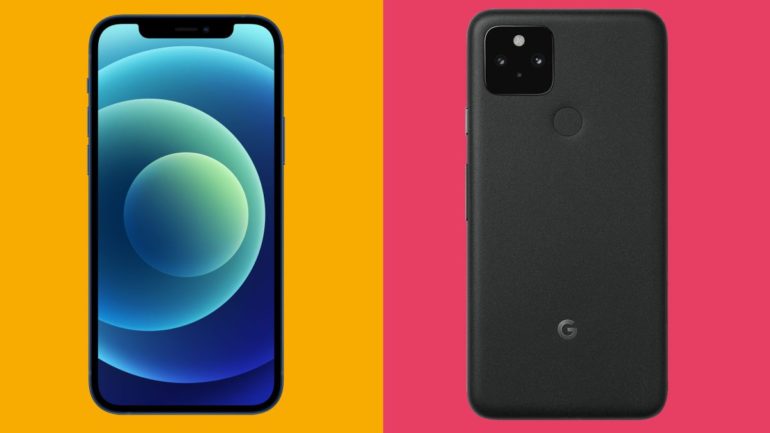 The iPhone 12 and the Google Pixel 5 aren’t just leading flagship phones – they’re standard bearers for the two major smartphone platforms in the world, iOS and Android.

Indeed, comparing these two phones means pitching two of the world’s biggest tech companies against one another. Both Apple and Google have set out their stall for what the ideal smartphone should look like, from software up to hardware.

So how do these two headline acts compare to one another? With a number of similarities and even more differences, it’s a truly fascinating comparison to make.

iPhone 12 vs Pixel 5 price and availability

These two phones bear very little similarity in terms of external design, but both buck trends in their own way.

In the case of the iPhone 12, it moves away from the obsession with smooth curves and rounded edges that appears to have taken hold of the wider smartphone industry. The iPhone 12 steps back to a time of flat surfaces and sharp edges, the likes of which haven’t been seen in a top-level phone since the iPhone 5S.

With the Pixel 5, on the other hand, it’s a materials thing. There’s no glass rear panel here, nor is there even some form of hybrid plastic of the type seen in the Galaxy S21. Instead, Google has stripped things back to the metal, with a cool yet premium material that wraps right around the sides.

There’s an interesting matte finish to this metal, too, which makes it feel a bit more like polycarbonate than your typical aluminum frame. The device is available in just two shades, Sorta Sage and Just Black, which rather pales next to the iPhone 12’s Silver, Graphite, Gold, and Pacific Blue options.

Still, metal is metal, and the Pixel 5 would seem to be more robust than the glass-backed iPhone 12. However, it’s worth pointing out that Apple’s phone comes with a new nano-crystalline Ceramic Shield screen around the front, which is said to be four times stronger than competing materials. It also has a superior IP68 rating to a depth of six metres of water for up to 30 minutes.

In terms of proportions, the iPhone 12 measures 146.7 x 71.5 x 7.4mm (HWD) next to the Pixel 5’s 144.7 x 70.4 x 8mm. This means that the Google phone is a smidgen shorter and narrower than its Apple counterpart, but also half-a-millimeter thicker. These are two of the lightest flagship phones on the market, too – although the iPhone 12 is the heavier unit at 164g compared to the Pixel 5 at 151g.

We weren’t massive fans of the Pixel 5’s stiff, nondescript side buttons in our review. Conversely, the iPhone 12 includes premium metal switches and that glorious Apple alert slider. The Pixel 5’s speakers, while stereo like the iPhone 12, seem to have taken a step back, too.

Another design difference is linked to a differing approach to biometric authentication. The Pixel 5 has a rather old-fashioned rear-mounted fingerprint sensor, while the iPhone 12 has a prominent screen notch for Face ID. It’s arguable that Apple’s approach is more advanced – yet, these days, the ability to unlock your phone wearing a mask is pretty darned useful.

All in all, we prefer the striking iPhone 12 design over the rather utilitarian Pixel 5. But they’re distinct enough that this could well come down to a matter of preference.

As different as these phones look, both opt for similarly compact OLED displays.

The iPhone 12 comes with a 6.1-inch Super Retina XDR OLED screen with 2532 x 1170 resolution. It’s one of the most balanced displays on the market in terms of color accuracy, and it can hit a peak brightness level of 1200 nits, with 600 nits in typical conditions.

In the other corner, the Pixel 5 offers up a similarly bright 6-inch OLED with a slightly lesser 2340 x 1080 resolution.

Where the Pixel 5 wins is for refresh rate. At 90Hz, Google’s flagship falls short of the 120Hz leading pack, but ends up 50% more fluid than the 60Hz iPhone 12. It’s a bit of an oversight on Apple’s part, if we’re being honest.

The iPhone 12 wins out for image fidelity, then, but the Pixel 5 scores big on fluidity. We’ll hand the win to the Google phone based on that latter result, but it’s close.

Both phones believe themselves to be photographic champs with their stripped-back, dual-camera offerings. And an initial glance suggests a similar approach.

Both main sensors give you the same 1.4µm pixel size, and both are backed by OIS. Neither camera setup offers a dedicated telephoto lens, relying on clever cropping algorithms for those zoomed shots.

Google’s approach to smartphone camera mastery has carried its Pixel line a long way. Rather than upgrading its hardware every year – a resource-intensive approach that has inevitable repercussions for the price – it prefers to use the same old sensor and makes advances through its formidable image-processing algorithms.

Of course, Apple has also made huge strides in recent years with its own image-processing techniques. The result is that both Apple and Google are among the very best at producing balanced smartphone camera images.

Sure enough, these are two of the very best camera phones in the business. Both devices take crisp, balanced shots in daylight and spookily clear shots at night. Google’s night shots are perhaps a little brighter, but the iPhone 12 can apply its Night mode across all of its cameras, even the selfie cam.

We prefer the wider nature of the iPhone 12’s 120-degree ultra-wide camera, which fits way more in than the rather piddly 107-degree field of view of the Pixel 5. Still, the way that Google manages to balance out the usual distortions and color balance issues with its ultra-wide feels magical.

Meanwhile, the iPhone 12 blows the Pixel 5 (and pretty much every non-Apple phone) out of the water when it comes to the quality of its video capture. Both can take 4K video at 60fps, but the iPhone 12’s is simply better.

All in all, we have to give the overall win to Apple. It’s made more forward strides in a greater number of areas for an all-round better camera experience – but it’s pretty darned close.

One area where there really is no room for debate is performance. The iPhone 12 absolutely blows the Google Pixel 5 out of the water on this front.

Of course, the A14 Bionic chip that powers the iPhone 12 blows every Android flagship out of the water. It’s the most powerful mobile processor in the business, after all.

But the Pixel 5 doesn’t even put up a fight, owing to Google’s landmark decision to compromise on power in the name of cost-effectiveness. If you want to know how the Pixel 5 is so much cheaper than the iPhone 12, exhibit number one would be its use of the Snapdragon 765 CPU.

The difference is spelled out with the Geekbench 5 multicore benchmark tests, with the Pixel 5 scoring 1,617 compared to the iPhone 12’s 3,859. That’s considerably more than double the output.

In AIApps and WebCompaniesSmartphones
on 4 December 20205 min read

Google’s phone might be backed by double the RAM of the iPhone 12 – 8GB versus 4GB – but that’s largely irrelevant given the differing ways Android and iOS make use of their memory.

In practical terms, the Pixel 5 breezes through a range of tasks, from browsing the web to gaming and playing media. We only really saw any notable performance dips after sustained bouts of Call of Duty: Mobile, and then not during gameplay.

But the iPhone 12 has such a generous amount of headroom that we feel confident it will feel fast for years. We can’t quite say the same for the Pixel 5 with a degree of certainty – especially given Apple’s superior track record of ongoing hardware support.

The Pixel 5 partially strikes back with the provision of 128GB of storage as standard. The iPhone 12 gets 64GB, which really doesn’t feel like enough any more. Sure, you can specify 128GB or 256GB, but that will cost you big.

Both phones pack 5G as standard, so there’s no advantage there to speak of. Nor can we call a winner when it comes to software.

Against literally every other Android manufacturer, Apple arguably has an edge here – but not with the Pixel. Even the slickest Android UI remains a modification of the core Google OS, so even if you prefer the way Samsung (or OnePlus, or Xiaomi) does things, it isn’t a pure or perfectly optimized experience. Not so with the Pixel 5, which is Google through-and-through, just as the iPhone 12 is all-Apple all of the time.

However, it isn’t quite as simple as that, since iOS is generally more frugal than Android. Also, the iPhone 12 has a better, more efficient processor and a less power-intensive 60Hz display.

Ultimately, both phones have good but not outstanding stamina. We’d give the Pixel 5 the edge – it’s a big improvement over the Pixel 4, in particular – but both handsets are firmly in the ‘solid day of use’ category with anything between light and very heavy usage.

The iPhone 12 has a slight edge when it comes to recharging, with support for 20W wired charging compared to the Pixel 5’s 18W. But at least the Pixel ships with that charger. You need to buy the iPhone’s fast charger (or any charger, for that matter) separately.

While the iPhone 12 and the Pixel 5 ostensibly give us a tantalising ‘Apple vs Google’ face-off, direct comparisons are quite tricky.

Apple has opted for a bold, premium design statement with its iPhone 12, bringing a number of a Pro flourishes to its mainstream line. Conversely, the Pixel 5 strips things back from the Pixel 4, offering a flagship-approximate experience for a mid-range price.

The Pixel 5 is much cheaper than the iPhone 12 as a result, which makes it the better choice for those on a £500(ish) budget. For that money you’ll get a camera system, a display, and a clean software experience that’s competitive with Apple’s.

If you’re willing to spend more, then the iPhone 5 undoubtedly feels like the more premium phone – and its performance is in another league entirely.