Americans would rather harm their own political cause than help an opposing one, finds study 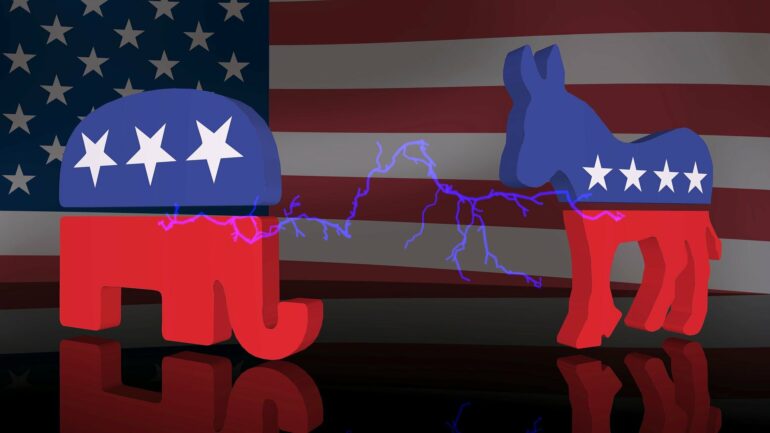 Both Democrats and Republicans would rather take away funding from their political party than give money to the other party, reveals a new University of California San Diego Rady School of Management study. The research also assesses people’s preferences regarding two other contentious issues—gun rights and reproductive rights—and finds the same result: people would rather hurt the cause they believe in than support one they oppose.

The study, published in the Proceedings of the National Academy of Sciences, is the first to provide evidence for this costly preference.

The study surveyed 3,876 individuals from winter of 2019 through summer of 2022. The researchers assessed if participants were Republicans or Democrats and then asked participants in a survey if they preferred to add $1 to a donation going to the opposing political party, or subtract $1 from a donation going to their party. In complementary experiments, the funds varied from $10 to $100.

More than 70% of participants, regardless of their political affiliation, opted to not add a donation to the opposing political party, even though it meant hurting their own political party. The same was true when participants were asked to give money to pro-choice or pro-life causes as well as pro-gun-control or anti-gun-control causes.

“Remarkably, we saw these results even though both conservative and liberal respondents noted they thought their side was more effective with funding,” the authors write. “In fact, our findings reveal that individuals are so averse to providing any support to the opposing group that they, on average, accepted triple the amount of financial loss to their group in order to avoid any gains for the other side.”

The results were replicated across six different studies with some studies using real donations in which the researchers actually allocated funds based on participants’ preferences.

The researchers found that even individuals who reported they did not have strongly held beliefs about their political party or on the issues of gun rights and reproductive rights also prefer to harm their own group over supporting their political opposition.

The vast majority of the participants were from the U.S. and were broadly representative of the country’s populace in terms of age, ethnicity and gender. One experiment surveyed participants in the United Kingdom who were assessed on their support of either the Conservative or Labor party and those results demonstrated a similar preference to harm one’s side rather than help the opposition.

“We were curious to know whether this phenomenon is unique to the U.S. or exists in other countries,” said Fridman. “In future research, we are interested in exploring whether the pattern of preferences we found extends to more cultures and political environments.”

The authors propose that identity concerns drive this behavior.

“We find that participants do not make decisions in this context based on the expected real-world impact of their choice,” said Gershon. “Rather, they are influenced by the desire to protect their identity. They believe that supporting the opposing group will have a greater negative influence on their identity and therefore choose to harm their own group instead.”

When influential political figures cross the aisle, it could reduce divisiveness

To reverse this effect and promote cooperation, the authors engineered an experiment where they disclosed to study participants that most members of their group did compromise by providing a small amount of support to their opponents, rather than harming their own group. Communicating information on group “norms” lead to changes in behavior—individuals who were told that others with the same political affiliation were willing to support the opposing side also became more likely to do the same.

The authors conclude, “Our findings offer a practical approach that has the potential to increase cooperation: providing information about norms between like-minded individuals may reduce people’s identity concerns, thereby allowing for behaviors that support the opposing groups when it is advantageous for the collective good.”

They note that identity may be playing an outsized role in our political decision-making.

“Our findings have real implications for decision-making in polarized contexts, including high stakes political choices,” they write. “For example, a congressperson wishing to cross the aisle to support important legislation may be hindered by the assumption that it would signal disloyalty to their party. In a period of high divisiveness, this work sheds light on the role of identity in polarized contexts and the psychological obstacles that may impede progress.”

More information:
Gershon, Rachel, Individuals prefer to harm their own group rather than help an opposing group, Proceedings of the National Academy of Sciences (2022). DOI: 10.1073/pnas.2215633119.


Citation:
Americans would rather harm their own political cause than help an opposing one, finds study (2022, November 28)