COVID rekindled an appreciation of nature for many 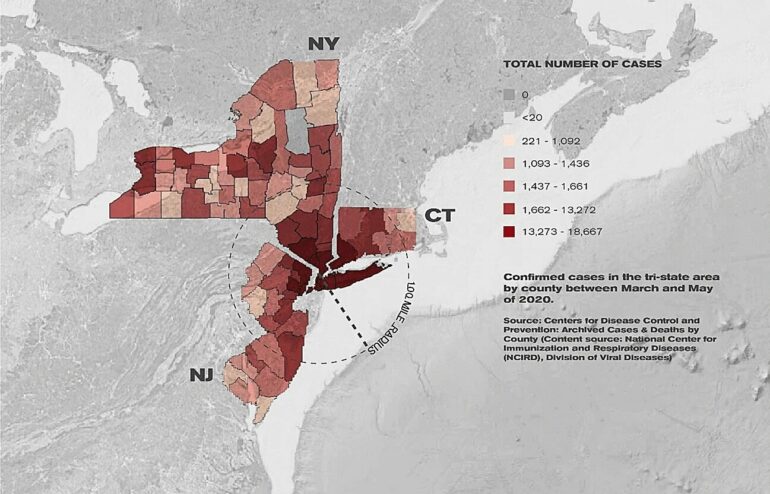 The pandemic has impacted our lives in a multitude of ways, many of which will no doubt be felt for years to come. While many of those effects are clearly negative, UConn researchers have identified at least one positive impact—our perception of natural spaces changed. The findings are published in Scientific Reports.

As people flocked to outdoor spaces for recreation in the spring of 2020, Sohyun Park, assistant professor in UConn’s College of Agriculture, Health and Natural Resources Department of Plant Science and Landscape Architecture, noticed some interesting trends: more people were on the trails, and many of those people had traveled from far away to enjoy nature.

Park was also part of the team for the Connecticut Trail Census and co-wrote a paper about the trends.

“What’s interesting was rural trail use increased compared to urban trails,” Park says. “I wanted to try to find out how people were changing their mindset or their attitudes or perceptions.”

To do this, Park and co-authors Seungman Kim and Jaehoon Lee of Texas Tech University, and Biyoung Heo of James Corner Field Operations, looked to social media data and machine learning techniques to help make sense of the vast quantities of information on Twitter and try to find a pattern among those data, says Park. They utilized Twitter’s Application Programming Interface (API), which allows researchers to obtain aggregated data from Twitter posts.

“We wanted to know from the people who have been in greenspaces, what were they doing and what they were writing about on Twitter. We utilized very innovative and advanced levels of machine learning methods,” says Park. “The machine categorized the keywords and classified them into several human-recognizable groups. One group was nature related. The second group is all traditional park-related activities and the third one is obviously the COVID-related one, so mask wearing and social distancing, and things like that.”

A newfound appreciation for nature

Though what people were doing in the parks did not change significantly, the researchers noticed some significant changes in keyword usage between pre-pandemic and pandemic Twitter, with people frequently referencing nature, and their experiences within it.

“Users began to put the word ‘nature’ and nature-related activities or nature-related pictures on their Twitter,” Park says. “It was very interesting because, in the past, there were not many keywords like that, but people used keywords like ‘playing’, ‘walking the dog’, ‘baseball’, and other traditional, active park activities that they were enjoying while they were there in the parks. If you look at post- 2020 Twitter, you can also see keywords thanking God or showing appreciation for nature, describing the birds singing or water sounds.”

What the researchers found was people seemed to have realized a newfound appreciation for nature and greenspaces, especially true for those in urban settings. As a landscape architect, Park was interested to see if there was something more to the findings and perhaps if there might be some design implications for the results.

Common features in modern parks include benches, walking paths, and sports fields, for instance. However, Park says the results of the paper seem to suggest that natural greenspaces appeal to people differently.

“We might want to go back to the origin of public parks like those Olmsted designed,” Park says. “In his time in 19th century, there was a lot of hustle and bustle in the city, and they wanted to have space for people to find respite and peace. We might want to go back to that era living with a 21st century health crisis and try to rethink about the design principles.”

Park says to imagine Manhattan’s Central Park, which hosts ponds, wooded areas, and meadows. Most of those natural features were introduced artificially and were not there in the first place. Compare this with contemporary parks:

“Modern parks may be well managed, maintained, and manicured, everything is clean and tidy,” Park says. “There are some seating areas, paved surfaces, and structures where you can play something with your friends and family members, but not really in a naturalistic style. People can feel that in public spaces.”

The outdoors as essential resource for overall well-being

Greenspaces impact mental, physical, and spiritual health, and Park reasons that these natural elements might be essential in public spaces, particularly for those who have less access to the public parks, or marginalized communities that don’t have any green areas at their residences.

“I’m arguing that parks are not only recreational spaces; greenspaces and parks serve as essential amenities for all including those with low incomes or disabilities, and the elderly,” Park says. “Parks need inclusive planning approaches that might be added to the current principles for park development.”

Park explains that many people are involved in the planning, design, and management of parks and greenspaces. The tricky part is that the more naturalistic, garden concept for public parks may require more planning and maintenance, and therefore these design features rely more heavily on resources and budgets.

“In the long term, I think that will be the direction that we need to go and now officials and park managers need to work together with those who are living nearby so that we can have some kind of co-managing type of approaches to the future,” Park says.

This study highlights the importance of those design features and their roles in our emotional and spiritual well-being, and Park says it is important for the public to advocate for our greenspaces. Research like this can inform decision-making.

“It is important for the public and decision-makers to understand that ultimately, we need to have a budget to have more natural features and nature-oriented programs in the park. We all need to be more active in terms of the things that towns are doing. That can start with joining your town’s Conservation Commission or attending monthly meetings. Participate and make your voice heard. That makes a huge change and can impact big decisions. Sometimes these decision makers are really grounded by how the stakeholders are feeling so giving some input and feedback on the public decision-making should be the first step. It is empowering and more people need to be involved in public planning.”


Citation:
COVID rekindled an appreciation of nature for many (2022, September 2)