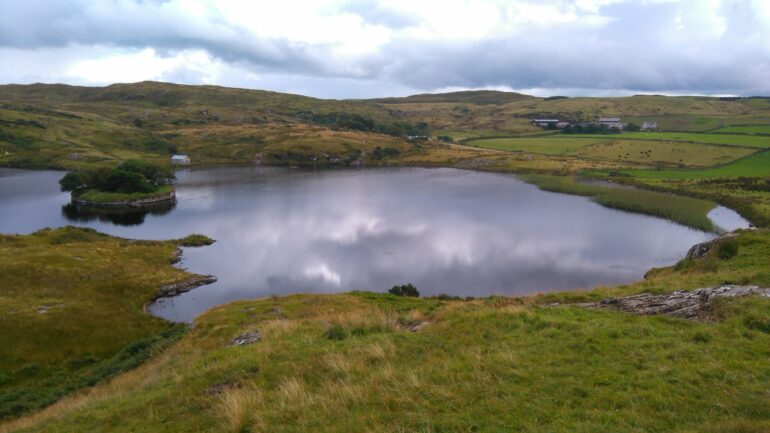 Researchers have recovered DNA from the sediments surrounding ancient artificial islands, known as crannogs, in Britain and Ireland. These results, along with environmental and biochemical data in these sediments, show the structures were once used by elites.

Crannogs were built and occupied from the Neolithic, 4000–2200 BC, through to the 16th century AD. Hundreds have been found, mostly in Scotland, Ireland, and Northern Ireland.

However, the aquatic location of crannogs makes them difficult for archaeologists to excavate. So Professor Antony Brown, from UiT Arctic University of Norway, and an interdisciplinary team from across the UK set out to take samples from lake sediments instead.

Previous research had recovered environmental data, like pollen, from sediment cores obtained near crannogs. Material gets washed off the island and deposited layer by layer in the lake, so cores of these sediments reveal crannog conditions over time.

Now, Professor Brown and the team have also been able to recover DNA from these cores, known as “sedaDNA.” This was combined with analysis of other material in the sediment to build an integrated picture of the crannogs. Their work is published in the journal Antiquity.

For this research, the team analyzed sediment cores from around crannogs in White Loch of Myrton, Scotland, and Lough Yoan, Ireland. Radiocarbon dating of the cores revealed the crannog in White Loch was built in the Iron Age, around 400 BC, whilst Lough Yoan’s dates to the medieval period. They found both were abandoned and re-occupied multiple times.

The integrated analysis showed that the crannogs were important places, likely high-status homes, stocked with resources. The team found pollen from bracken, for bedding, as well as signs crafting took place on the islands.

Additionally, sedaDNA from cows, sheep, and goats indicated that animals were kept on the crannogs. At one of the Lough Yoan crannogs, bone fragments suggest that were butchered on-site in high quantities, likely for feasts. This supports previous research suggesting some crannogs were compounds used by the elite, perhaps for ceremonial occasions.

The team also found that the cost of supplying the crannogs with these resources meant they were linked to dramatic changes in the local area. Changes in pollen and plant sedaDNA indicated crannog construction was associated with deforestation, likely to provide materials and clear farmland. Meanwhile, waste from the inhabitants polluted the lakes, leading to human impact on lake ecosystems as early as the Iron Age.

As such, this research sheds new light on life on crannogs and also shows how this integrated method of studying sediment cores provides insight into otherwise hard-to-study waterside sites. This approach, incorporating sedaDNA, provides researchers with a powerful new tool.

In the pursuit of scientific truth, working with adversaries can pay off

The team are already expanding to study other crannogs. These unique structures are under threat from erosion and other environmental changes.

Citation:
DNA found in sediment reveals that ancient artificial islands may have been high-status homes (2022, October 10)