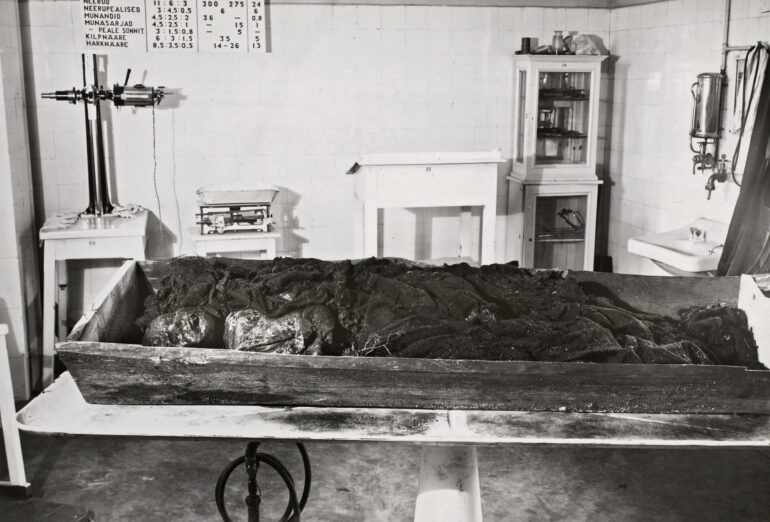 An international team of archaeologists have analyzed hundreds of ancient human remains found in Europe’s wetlands, revealing these “bog bodies” were part of a tradition that spanned millennia. People were buried in bogs from the prehistoric period until early modern times. The team also found that, when a cause of death could be determined, most met a violent end.

Several bog bodies are famous for being extremely well-preserved, such as Lindow Man from the United Kingdom, Tollund Man from Denmark and Yde Girl from the Netherlands. These individuals offer a snapshot of life in the distant past, with researchers able to reconstruct details like their last meals and even cause of death—most were killed, and are generally interpreted to be human sacrifices. However, these well-preserved examples are only a fraction of what has been found.

“Literally thousands of people have met their end in bogs, only to be found again ages later during peat cutting,” said Doctor Roy van Beek, from Wageningen University, “The well-preserved examples only tell a small part of this far larger story.”

As such, Doctor van Beek and a team of Dutch, Swedish, and Estonian researchers set to undertake a detailed, large-scale overview study of the hundreds of bog bodies found in Europe. Their research, published in the journal Antiquity, analyzed more than 1,000 individuals from 266 sites across the continent to build a more complete understanding of bog bodies.

The bog bodies examined in this research can be divided into three main categories: “bog mummies,” the famous bodies with preserved skin, soft tissue, and hair; “bog skeletons,” complete bodies, of which only the bones have been preserved; and the partial remains of either bog mummies or skeletons.

The different types of bodies are mainly the result of varying preservation conditions: some bogs are better suited to preserving human tissue, while others preserve bone better. As such, the distribution does not tell us much about past human behavior, and focusing on just one kind leads to an incomplete picture.

“The new study shows that the heavy emphasis of past archaeological research on a small group of spectacular bog mummies has distorted our views,” said Doctor van Beek, “All three categories yield precious information, and by combining them a whole new picture emerges.”

Examining all three kinds of bog body reveals that they are part of a millennia-long, deep-rooted tradition. The phenomenon starts in southern Scandanavia during the Neolithic, around 5000 BC, and gradually spreads over Northern Europe. The youngest finds, known from Ireland, the United Kingdom and Germany, show the tradition continued into the Middle Ages and early modern times.

The new study also demonstrates that many finds show evidence of violence. Where a cause of death could be determined, the majority appear to have met a gruesome end and were likely intentionally left in bogs. This violence is often interpreted as ritualistic sacrifices, executed criminals, or victims of violence. However, in the last few centuries, written sources indicate there were a significant number of accidental deaths in bogs, as well as suicides.

“This shows that we should not look for a single explanation for all finds,” said Doctor van Beek, “accidental deaths and suicides may also have been more common in earlier periods.”

Why we shout during video calls if the image gets blurry

The team also discovered that there were hotspots for bog bodies: wetlands where the remains of multiple people have been found. In some cases, these finds reflect a single act such as the mass burial of battle dead. Other bogs were used time and again and the human remains were accompanied by a wide range of other objects that are interpreted as ritual offerings, ranging from animal bones to bronze weapons or ornaments. Such bogs are interpreted as cult places, that must have taken a central place in the belief system of local communities. Another remarkable category is formed by so-called “war-booty sites,” where large quantities of weapons are found alongside human remains.

“All in all, the fascinating new picture that emerges is one of an age-old, diverse and complex phenomenon, that tells multiple stories about major human themes like violence, religion and tragic losses,” said Doctor van Beek.

Citation:
Europe’s famous bog bodies may be part of a tradition that spanned millennia (2023, January 12)