Gold from Troy, Poliochni and Ur found to have the same origin 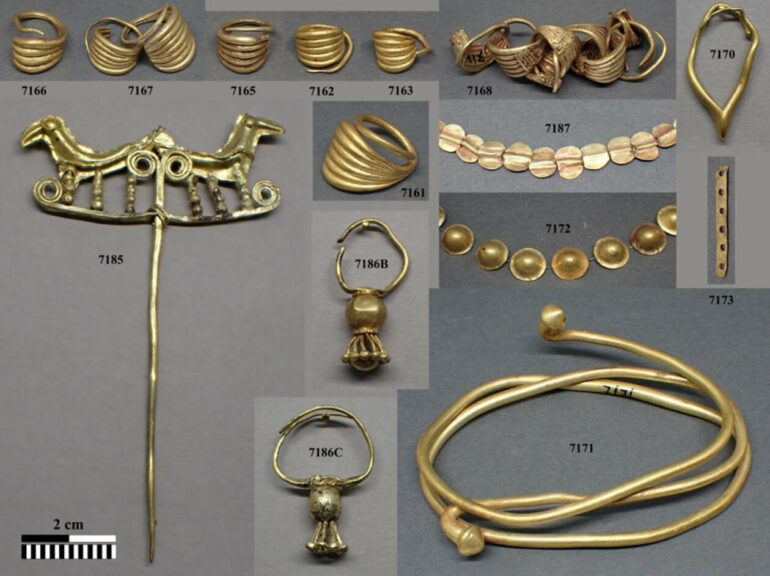 The gold in objects from Troy, Poliochni (a settlement on the island of Lemnos which lies roughly 60 kilometers away from Troy), and Ur in Mesopotamia have the same geographic origin and were traded over great distances.

This discovery has been made by an international team of researchers using an innovative mobile laser method to analyze samples of the famous Early Bronze Age jewelry from Troy and Poliochni. The results have been published in Journal of Archaeological Science.

Their international team brought together scientists and archaeologists from the Curt-Engelhorn Center for Archaeometry, the Austrian Archaeological Institute in Vienna and the National Archaeological Museum in Athens.

Ever since Heinrich Schliemann discovered Priam’s Treasure in Troy in 1873, the origin of the gold has been a mystery.

Professor Pernicka and the international team has now been able to prove that it derived from what are known as secondary deposits such as rivers and its chemical composition is not only identical with that of gold objects from the settlement of Poliochni on Lemnos and from the royal tombs in Ur in Mesopotamia, but also with that of objects from Georgia. “This means there must have been trade links between these far-flung regions,” says Pernicka.

The study was made possible because of a portable laser ablation system (pLA) that enabled the team to undertake minimally invasive extraction of samples from jewelry in the National Archaeological Museum in Athens. The necklaces, pendants, earrings and chokers in the museum are so precious that it is not permitted to transport them to a laboratory or to undertake any examination that leaves a visible mark on the objects.

All previously available methods failed because of at least one of these constraints. By contrast, working on site, the portable laser device melts such a small hole in the items that it cannot be seen with the naked eye. Pernicka and his team at the Curt-Engelhorn Center for Archaeometry in Mannheim were then able to investigate the composition of the samples using mass spectrometry.

As well as gold, historic pieces of jewelry always contain other elements such as silver, copper, zinc, palladium and platinum. Depending on the alloy, scientists can create a distinct chemical profile for the finds and use this to draw conclusions. For instance, the high concentrations of zinc, palladium and platinum in the jewelry from Troy are a clear sign that the gold used to create the pieces was washed out of a river in the form of gold dust.

The researchers were also able to show that the jewelry was mass-produced by workshops and not just as individual items. This is the only reasonable explanation, for example, for the identical amount of platinum and palladium being present in the gold disks in necklaces of the same design that were found at different sites.

In total the team of researchers studied 61 artifacts, all originating from the Early Bronze Age between 2,500 and 2,000 BCE. This is also the period of the famous Priam’s Treasure, which Schliemann wrongly attributed to the mythical king of Troy from the Iliad.

Experts have long debated the origin of the gold from the royal tombs of Ur as well. There are no natural sources of gold in Mesopotamia—so West Anatolia, which was also the site of Troy, was believed to be a possible source. “However, other quite different regions which are known to have had strong trade links with Ur have also been considered,” says Pernicka.

Comparative archaeological studies have shown from strikingly similar items that these were used in the Early Bronze Age across a large geographic area, stretching from the Aegean to the Indus valley in what is now Pakistan: official seals and standardized weights, earrings with the same spiral patterns, gemstones such as lapis lazuli or the shimmering carnelian. “The new archaeometric data open up a sound and global framework for our models of societies, their networks and the significance of resources around 4500 years ago,” says Horejs.

The precise origin of the gold of Troy could not however be determined once and for all by the researchers, Pernicka says, “If we observe the share of trace elements in the gold from Troy, Poliochni and Ur, Bronze Age gold from Georgia correlates the closest with the stated find sites. But we still lack data and studies from other regions and from other objects to establish this assumption.”


Citation:
Gold from Troy, Poliochni and Ur found to have the same origin (2022, November 30)