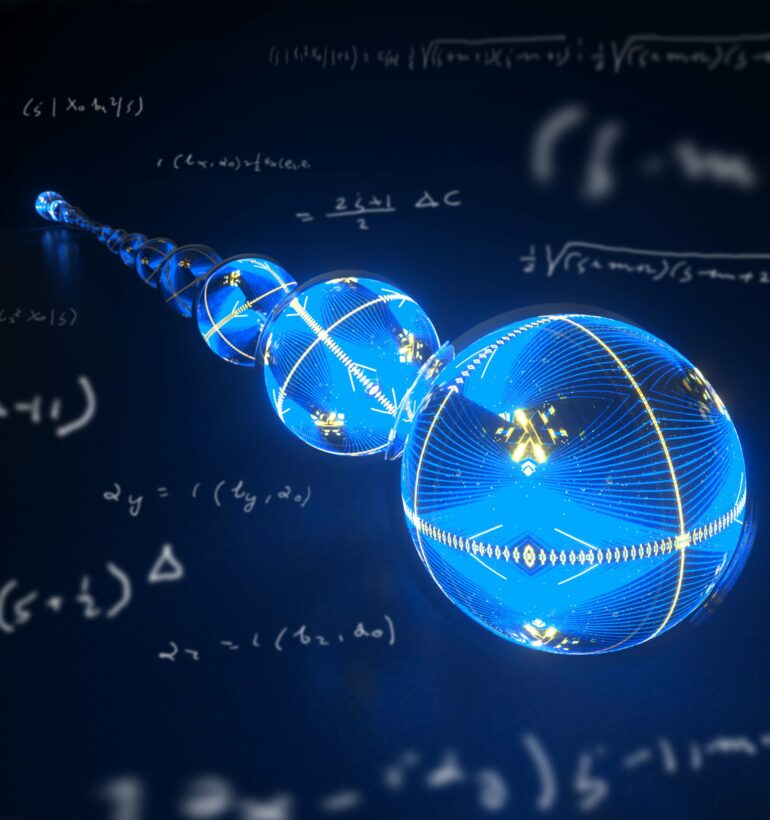 Physicists at Google Quantum AI have used their quantum computer to study a type of effective particle that is more resilient to environmental disturbances that can degrade quantum calculations. These effective particles, known as Majorana edge modes, form as a result of a collective excitation of multiple individual particles, like ocean waves form from the collective motions of water molecules. Majorana edge modes are of particular interest in quantum computing applications because they exhibit special symmetries that can protect the otherwise fragile quantum states from noise in the environment.

The condensed matter physicist Philip Anderson once wrote, “It is only slightly overstating the case to say that physics is the study of symmetry.” Indeed, studying physical phenomena and their relationship to underlying symmetries has been the main thrust of physics for centuries. Symmetries are simply statements about what transformations a system can undergo—such as a translation, rotation, or inversion through a mirror—and remain unchanged. They can simplify problems and elucidate underlying physical laws. And, as shown in the new research, symmetries can even prevent the seemingly inexorable quantum process of decoherence.

When running a calculation on a quantum computer, we typically want the quantum bits, or “qubits,” in the computer to be in a single, pure quantum state. But decoherence occurs when external electric fields or other environmental noise disturb these states by jumbling them up with other states to create undesirable states. If a state has a certain symmetry, then it could be possible to isolate it, effectively creating an island of stability that is impossible to mix with the other states that don’t also have the special symmetry. In this way, since the noise can no longer connect the symmetric state to the others, it could preserve the coherence of the state.

In 2000, the physicist Alexei Kitaev devised a simple model to generate symmetry-protected quantum states. The model consisted of a chain of interconnected particles called fermions. They could be connected in such a way that two effective particles would appear at the ends of the chain. But these were no ordinary particles—they were delocalized in space, with each appearing at both ends of the chain simultaneously.

These were the Majorana edge modes (MEMs). The two modes had distinctly different behaviors under so-called parity transformation. One mode looked identical under this transformation, so it was a symmetry of the state. The other picked up a minus sign. The difference in parity between these two states meant that they could not be mixed by many external noise sources (i.e. those that also had parity symmetry).

In their new paper published in Science and titled “Noise-resilient Majorana edge modes on a chain of superconducting qubits,” Xiao Mi, Pedram Roushan, Dima Abanin and their colleagues at Google realized these MEMs with superconducting qubits for the first time. They used a mathematical transformation called the Jordan-Wigner transformation to map the model Kitaev had considered to one that they could realize on their quantum computer: the 1D kicked-Ising model. This model connects each qubit in a 1D chain to each of its two nearest neighbors, such that neighboring qubits interact with one another. Then, a “kick” periodically disturbs the chain.

Mi and his colleagues looked for signatures of the MEMs by comparing the behavior of the edge qubits with those in the middle of the chain. While the state of the qubits in the middle decohered rapidly, the states of those on the edge lasted much longer. Mi says this was “preliminary indication for the resilience of the MEMs toward external decoherence.”

The team then conducted a series of systematic studies on the noise resilience of the MEMs. As a first step, they measured the energies corresponding to the various quantum states of the system and observed that they exactly matched the textbook example of the Kitaev model. In particular, they found that the two MEMs at the opposite ends of the chain are exponentially more difficult to mix as the system size grew—a hallmark feature of the Kitaev model.

Next, the team perturbed the system by adding low-frequency noise to the control operations in the quantum circuits. They found that the MEMs were immune to such perturbations, contrasting sharply with other generic edge modes without symmetries. Surprisingly, the team also found that the MEMs are resilient even to some noise that breaks the symmetries of the Ising model. This is due to a mechanism called “prethermalization,” which arises from the large energy cost required to change the MEMs into other possible excitations in the system.

Lastly, the team measured the full wavefunctions of the MEMs. Doing so required simultaneously measuring the states of varying numbers of qubits close to either end of the chain. Here they made another surprising discovery: No matter how many qubits a measurement included, its decay time was identical. In other words, measurements involving even up to 12 qubits decayed over the same time scale as those of just one qubit. This was contrary to the intuitive expectation that larger quantum observables decay faster in the presence of noise, and further highlighted the collective nature and noise resilience of the MEMs.

Mi and Roushan believe that in the future, they might be able to use MEMs to enable symmetry-protected quantum gates. Their work demonstrates that the MEMs are insensitive to both low-frequency noise and small errors, so this is a promising route to making more robust gates in a quantum processor.

Uncertainty is inescapable, even in a science as precise as nuclear physics

The researchers plan to continue to improve the level of protection these MEMs experience, hopefully to rival some of the leading techniques used to fight against decoherence in quantum computers. Abanin says, “A key question for future works is whether these techniques can be extended to achieve the levels of protection comparable to active error-correction codes.”