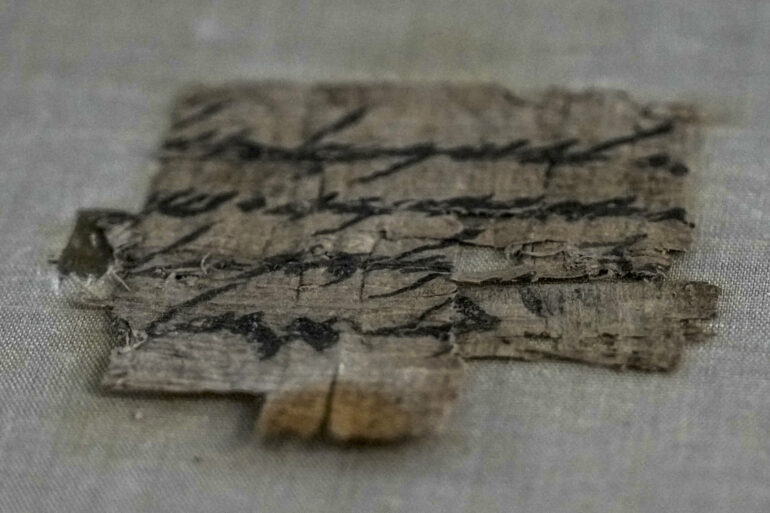 Israel has acquired a previously unknown ancient papyrus bearing a Hebrew inscription dated to around 2,700 years ago that had long been in possession of a Montana resident, the country’s antiquities authority said Wednesday.

The scrap of papyrus—scarcely larger than a postage stamp with four lines of angular script—is one of just a few from the region in the Late Iron Age, archaeologists said. The Israel Antiquities Authority said it authenticated its age using radiocarbon dating, which corresponded with the age of the text’s writing style.

Joe Uziel, director of the Judean desert scrolls unit, said the matching radiocarbon date and paleographic style makes him “very certain” that it is not a modern forgery.

The papyrus, which bears the Biblical name Ishmael, was likely looted sometime in the last century from a cave in the Judean Desert, he said.

Its provenance and journey from the desert to Montana six decades ago and now to Jerusalem remain nebulous.

The antiquities authority declined to name the Montana resident but said the man’s mother obtained the artifact during a visit to what was then Jordanian-occupied east Jerusalem in 1965 and brought it to the United States.

Jordanian law that was in force at the time severely restricted the sale of antiquities and prohibited the export of artifacts without a permit from the minister of antiquities. It wasn’t clear whether the woman possessed such authorization.

Numerous scroll fragments from the arid region near the Dead Sea that have emerged on the antiquities market in recent years, including several at Washington’s Museum of the Bible, have proven to be forgeries.

The antiquities authority showed the papyrus to the press at its labs in Jerusalem alongside two other ancient Hebrew fragments it holds—one found in a cave near the Dead Sea in the 1950s and a second that was seized from the antiquities black market in 2016 and believed to have been looted from a cave.

Eitan Klein, head of the Israeli antiquities’ theft prevention unit, said the Montana man’s mother may have either purchased the object from Khalil Iskander Shahin—a Bethlehem-based antiquities dealer better known as “Kando,” who traded in many of the originally discovered Dead Sea Scrolls—or may have been given the papyrus by the curator of the Rockefeller Museum in Jerusalem.

How Shahin or the curator, both of whom have since died, obtained the papyrus remains uncertain.

The unidentified Montana man inherited the papyrus after his mother’s death. An Israeli academic noticed a photo of this previously undocumented text in a colleague’s unpublished papers and notified Klein, who tracked down the owner, the antiquities authority said.

Klein said the man was invited to Jerusalem in 2019 and the sides came to an unspecified “arrangement” whereby the papyrus was given to the Israeli authorities.