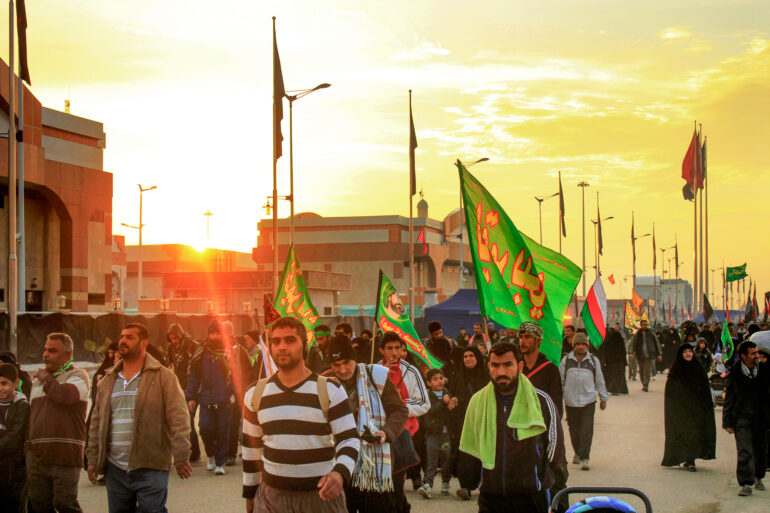 As the old adage has it, all politics is local. That might seem a quaint idea in an age of social media and global connectivity. And yet, as a study co-led by an MIT political scientist finds, it may describe Middle East politics more accurately than many people realize.

More specifically, sectarian identity in the Muslim world—especially the split between the Shia and Sunni sects of Islam—is often described as a transnational matter, in which people understand themselves as being part of a large divide spanning the Middle East and North Africa regions.

But an on-the-ground survey of Shiite Muslims (those who are Shia) engaged in a massive annual pilgrimage to the Iraqi city of Karbala reveals something different: Sectarian identity is often intertwined with domestic politics and shaped in connection with local social interactions.

“We found a different type of sectarian identity that definitely was not focused as much on the transnational dimension,” says Professor Fotini Christia, who directed the study.

Among other things, Muslim sectarian identity for participants in the study is not a doctrinal matter, emerging from religious study. Moreover, it also appears that men and women often develop sectarian identities in differing ways.

“It seems that it’s actually local politics seeping into an interpretation of the faith or of sectarian identity, rather than the other way around, with religion affecting people’s engagement,” Christia says. “There is also a gender dimension to this that has been overlooked.”

The paper, “Evidence on the Nature of Sectarian Animosity: The Shia Case,” is published today in Nature Human Behavior. The authors are Christia, who directs the MIT Sociotechnical Systems Research Center; Elizabeth Dekeyser, a postdoc at the Institute for Adanced Study in Toulouse, France; and Dean Knox, an assistant professor at the Wharton School of the University of Pennsylvania.

Research on the road to Karbala

To conduct the study, the scholars designed a survey of Shiite pilgrims walking to Karbala for the holy day of Arba’een—a collective mourning ritual at the shrine of Imam Husayn, one of the prophet Muhammad’s grandsons. This annual pilgrimage, banned under Saddam Hussein, is now one of the largest such annual events in the world, attracting Shia from many places.

Indeed, the structure of the pilgrimage helped the researchers conduct the study. The road from Najaf to Karbala, a 50-mile stretch that is the most heavily traveled part of the pilgrimage, features service tents organized around the areas people are from. That structure allowed Christia, working on the ground in Iraq with a local research team, to develop a sophisticated survey of a geographically diverse group of over 4,000 people in the Shia sect. About 60 percent of the participants were from Iraq, and 40 percent were from Iran; the survey was split roughly evenly by gender.

Overall, the Shia represent only about 20 percent of Muslims globally; they are predominant in Iran, but a minority in almost every other largely Muslim country and have received relatively less attention from social scientists and other scholars.

“When we think about the Muslim world there is a lot more focus on the Sunni side,” Christia says. “It felt like a big missing piece to have not engaged the Shia population in this kind of research.”

Due to the complexities of conducting research in Iran, she adds, “This is really a chance to engage a religious population from Iran that we could never access in Iran.”

All told, as the scholars state in the paper, the survey results show that sectarian animosity “is linked to economic deprivation, political disillusionment, lack of out-group contact, and a sect-based view of domestic politics.” Rather than representing a transnational, pan-Muslim view of social solidarity, sectarianism seems to operate a bit more like ethno-nationalism, derived from local experiences and bringing itself to bear on national political issues.

“One reason that it’s so hard to study the origins and correlates of animosity is because the concepts involved are intrinsically hard to quantify,” Knox says. “We take these issues seriously and validate our measures in numerous ways. For example, we quantify animosity through multiple approaches, including experiments, and we measure out-group contact with everything from self-reported information to smartphone-based location tracking. Ultimately, we’re able to use a variety of data sources to test the observable implications of existing theories about how and why individuals hold this animosity.”

The gender split and lived experience

At the same time, the survey results also yield some distinctive gender differences. Among Iraqi women, for instance, individuals who are more religious tend to be more sectarian, but men who are more religious tend to be less sectarian. Why? The scholars suggest that while Shiite doctrine discourages sectarianism, the social activities of religious practice abet it, by bringing people from only one sect together. For men who already work outside the home and have other means of socialization, this may have little impact on their world views. But for women for whom sectarian religious gatherings are a primary form of socialization, practicing religion more actively can thus increase sectarian views.

Similarly, the connection between democratic disillusion and sectarianism in the survey is primarily driven by women (in contrast to the public image of young Muslim men driving sectarian conflict). The researchers hypothesize that this, too, comes from the greater opportunities for men to absorb varying views in the public sphere, while the more limited socialization opportunities for women reinforce sectarian views.

“Providing a full, nuanced analysis of the divergent ways that men and women understand sectarianism is critical,” Dekeyser says. “For behaviors and beliefs that are heavily influenced by socialization, like intergroup relations, ignoring the entirely different lived experiences across genders can both fail to examine critical variation in beliefs, and lead to incorrect social and political conclusions.”

And the fact that lived experience itself is largely localized, for most people, in turn means their views are grounded in those concerns. After all, Christia observes, consider that even people engaged in the Karbala pilgrimage, an international event, organize themselves according to their places of origin.

“Even at this event which is transnational, because there are Shia from all over the place, even there, it’s in a way a celebration of their local identity,” Christia says.

All told, the close study of sectarian animosity, rather than a reliance on received notions about it, is necessary for fully understanding the views of people around the Muslim world.

“So many other places where politics are problematic and we [the U.S.] have been engaged in the Middle East, like Iraq or Syria or Lebanon or Yemen, have this sectarian dimension,” Christia says. “We need to think about religion and politics, and how this really manifests itself. … The fact that there is this [political] dimension to it, more than this transnational religious dimension, [and that] is an important takeaway.”