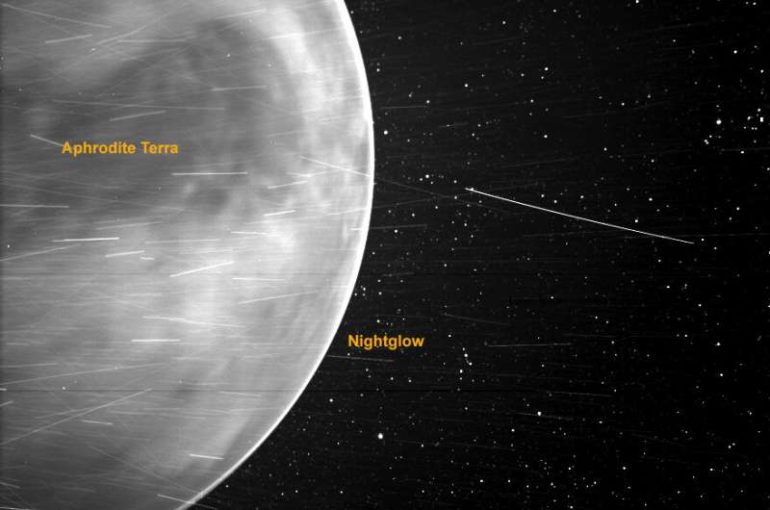 NASA’s Parker Solar Probe captured stunning views of Venus during its close flyby of the planet in July 2020.

Though Parker Solar Probe’s focus is the Sun, Venus plays a critical role in the mission: The spacecraft whips by Venus a total of seven times over the course of its seven-year mission, using the planet’s gravity to bend the spacecraft’s orbit. These Venus gravity assists allow Parker Solar Probe to fly closer and closer to the Sun on its mission to study the dynamics of the solar wind close to its source.

But—along with the orbital dynamics—these passes can also yield some unique and even unexpected views of the inner solar system. During the mission’s third Venus gravity assist on July 11, 2020, the onboard Wide-field Imager for Parker Solar Probe, or WISPR, captured a striking image of the planet’s nightside from 7,693 miles away.

WISPR is designed to take images of the solar corona and inner heliosphere in visible light, as well as images of the solar wind and its structures as they approach and fly by the spacecraft. At Venus, the camera detected a bright rim around the edge of the planet that may be nightglow—light emitted by oxygen atoms high in the atmosphere that recombine into molecules in the nightside. The prominent dark feature in the center of the image is Aphrodite Terra, the largest highland region on the Venusian surface. The feature appears dark because of its lower temperature, about 85 degrees Fahrenheit (30 degrees Celsius) cooler than its surroundings.

That aspect of the image took the team by surprise, said Angelos Vourlidas, the WISPR project scientist from the Johns Hopkins Applied Physics Laboratory (APL) in Laurel, Maryland, who coordinated a WISPR imaging campaign with Japan’s Venus-orbiting Akatsuki mission. “WISPR is tailored and tested for visible light observations. We expected to see clouds, but the camera peered right through to the surface.”

This surprising observation sent the WISPR team back to the lab to measure the instrument’s sensitivity to infrared light. If WISPR can indeed pick up near-infrared wavelengths of light, the unforeseen capability would provide new opportunities to study dust around the Sun and in the inner solar system. If it can’t pick up extra infrared wavelengths, then these images—showing signatures of features on Venus’ surface—may have revealed a previously unknown “window” through the Venusian atmosphere.

“Either way,” Vourlidas said, “some exciting science opportunities await us.”

For more insight into the July 2020 images, the WISPR team planned a set of similar observations of the Venusian nightside during Parker Solar Probe’s latest Venus flyby on Feb. 20, 2021. Mission team scientists expect to receive and process that data for analysis by the end of April.

“We are really looking forward to these new images,” said Javier Peralta, a planetary scientist from the Akatsuki team, who first suggested a Parker Solar Probe campaign with Akatsuki, which has been in orbiting Venus since 2015. “If WISPR can sense the thermal emission from the surface of Venus and nightglow—most likely from oxygen—at the limb of the planet, it can make valuable contributions to studies of the Venusian surface.”