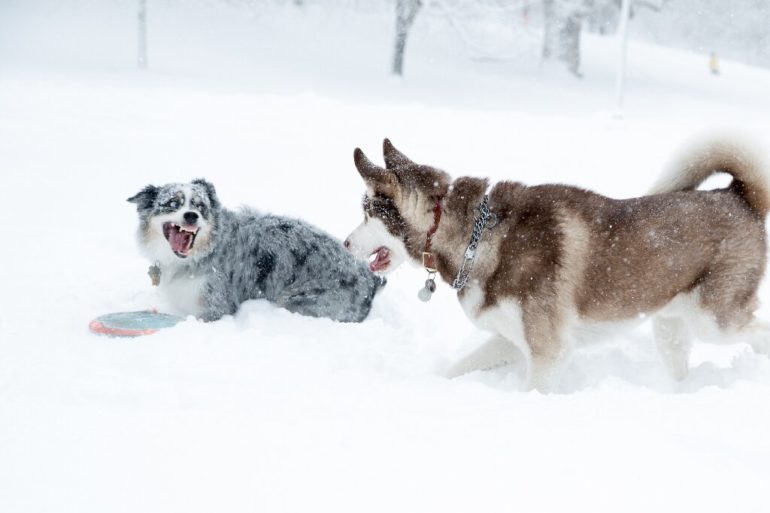 Pet dogs are far more likely to play with one another when their owner is present and being attentive, according to a new study, raising the intriguing possibility that they are putting on a show for our benefit.

That our canine companions are keenly attuned to the level of interest humans are showing them is well established, Lindsay Mehrkam, an animal behaviorist and lead author of the paper that appeared in Animal Cognition, told AFP Tuesday.

“But we weren’t aware of any research that has really shown the effect of a human audience impacting species typical behavior, in this case dog-dog play.”

Mehrkam oversaw an experiment involving 10 pairs of pet dogs that had lived together for at least six months.

The duos ordinarily engaged in play at least once a day, according to their owners.

To ensure the experiment was robust, they ran each of the conditions three times over the course of several days.

“We found overall that the availability of owner attention did in fact facilitate play,” said Mehrkam, with human attention increasing both the frequency and intensity of behaviors like bowing, hip nudges, wrestling, chasing, gentle bites and so on.

“It’s really quite striking that dogs who have the chance to play with each other whenever they want to, nonetheless are much more likely to get up off their butts and start playing when a person is just paying attention to them,” said co-author Clive Wynne of Arizona State University.

The researchers offered several ideas for what might be driving the effect.

One possibility is that an owner’s attention might be a reward the dogs are seeking, like young children pleading with their parents to watch them as they show off what they can do.

The dogs might have also learned that playing among themselves leads to bigger prizes, such as the owner joining in the fun, or taking them outside.

Or, their owner might provide the dogs a sense of safety, because although animals use play to strengthen bonds, it can sometimes turn tense and lead to aggression. Having a person around is insurance against a fight.

Their human’s presence could also be a trigger that enriches the general environment, perhaps causing a rush of the love hormone oxytocin, which leads to a more positive emotional state that in turn manifests as play.

“It’s one of those types of studies that leads to a lot more questions than answers,” said Mehrkam, adding she was working on untangling the various threads in ongoing experiments.