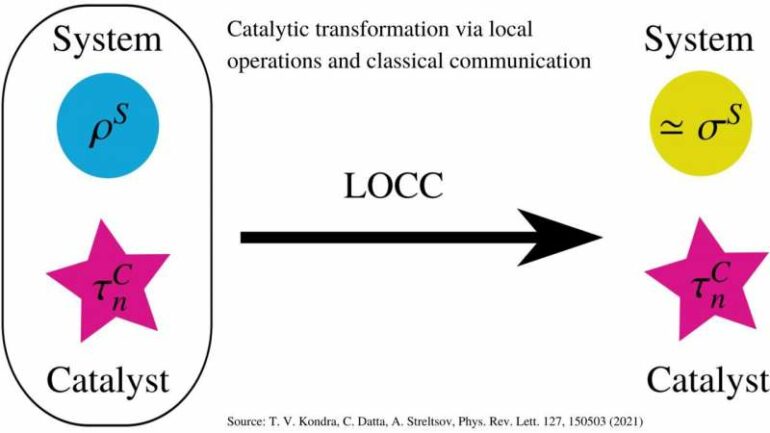 Quantum physicists at the University of Warsaw have discovered new applications for quantum catalysis—the quantum equivalent of chemical catalysis used in industry—revealing that quantum catalysts are useful in many more setups than previously known. The breakthrough could prove pivotal in future quantum key distribution networks or distributed quantum computing.

A team of quantum physicists from the Centre for Quantum Optical Technologies, University of Warsaw, Poland, has found a complete solution to the vexing problem of whether catalytic transformations from one initial quantum state to another desired quantum state are possible. The results of their study—released on 5 October 2021 in Physical Review Letters—prove the utility of catalysts in boosting quantum processes and quantify the amount of entanglement available for quantum information processing. The breakthrough is particularly pertinent to any quantum technology involving two or more distant labs; for instance, quantum key distribution networks or distributed quantum computing.

Entanglement is a key feature of quantum mechanics, and indeed, most quantum technologies being developed. In its simplest form, it occurs as correlation between two distant parties, say Alice and Bob. How much a given quantum system is entangled is given by its entanglement entropy, and this provides information on how efficient quantum communication is between Alice and Bob.

Before this work, entanglement entropy only had meaning when the two parties exchanged many signals, as Alexander Streltsov, co-author of the paper alongside Tulja Varun Kondra and Chandan Datta, explains: “If you flip a coin only once, then even if you know that the coin is fair, you will not know anything about the outcome of the flip—the entropy is only meaningful asymptotically,” he says. “Similarly with entanglement entropy, if Alice and Bob share only one instance of a quantum state, the entropy doesn’t have much meaning.”

To overcome this, the international team theoretically introduced an entangled catalyst into the mix.

Like catalysts used in industry to increase the rate of chemical reactions without being consumed themselves in the process, entangled catalysts are quantum systems that are not changed by the process under consideration, but influence the process to allow transformations that would not be possible without them. Specific examples of entangled catalysts inducing transformations were put forward as early as 1999, but it was not previously known which other quantum states could be achieved by adding a catalyst.

Streltsov and collaborators theoretically proved that in the presence of a suitable catalyst, entanglement entropy has physical meaning even when only a single instance of a pure quantum state is available, and in fact entanglement entropy completely characterizes transformations in this situation. From this, the researchers showed how to predict which transformations are indeed possible or not. “We have found a complete solution to the problem of whether catalytic transition is possible,” Streltsov confirms.

This new knowledge has a number of practical future applications. For instance, in quantum cryptography if Alice and Bob want to establish secure communication, they can share what is known as a singlet. Singlets are the optimal quantum states of two quantum bits (qubits). If Alice holds one of the qubits and Bob the other, then by performing a certain protocol, they can extract a perfectly secure key. The work of Streltsov and colleagues provides a way to know which quantum states can be transformed into singlets, and then subsequently used by Alice and Bob.

Streltsov and colleagues have applied their methods in more complicated quantum information tasks than transforming one quantum state to another as well, revealing how catalysts can enhance the efficiency of quantum state merging, a way of optimally sending information using entanglement and classical communication. Among other uses, the results are applicable to show how entangled catalysts make noisy states useful in quantum cryptography. “If there’s a lot of noise in the state, then eventually the standard quantum cryptography protocols will not give you a good result,” says Streltsov. But if the process is enhanced by adding an entangled catalyst at each end of, say, a noisy optical fiber, qubits can be exchanged without the process being spoiled. “Even if the fiber is very noisy, with this we can in principle reach very good efficiencies,” adds Streltsov.