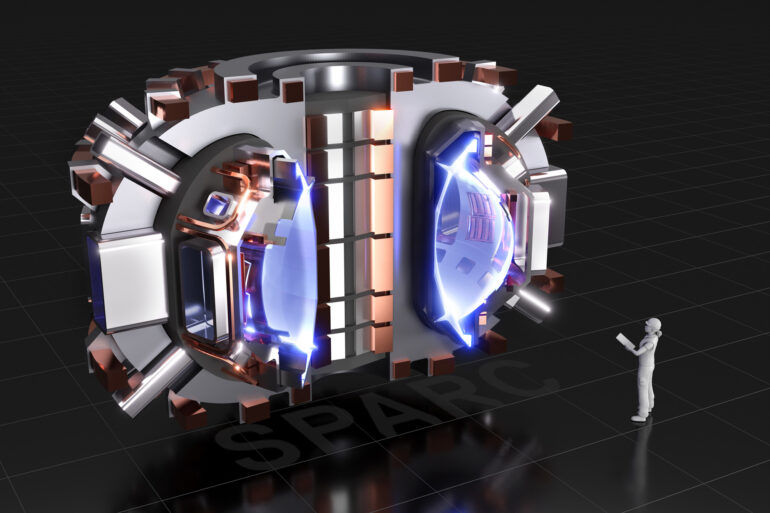 Type-I ELM plasma instabilities can melt the walls of fusion devices. A team of researchers from the Max Planck Institute for Plasma Physics (IPP) and the Vienna University of Technology (TU Wien) found a way to get them under control. Their work is published in the journal Physical Review Letters.

Nuclear fusion power plants could one day provide a sustainable solution to our energy problems. That is why research is being carried out worldwide on this method of energy generation, which imitates processes on the sun. For the principle to work on Earth, plasmas must be heated to at least 100 million degrees Celsius in reactors. Magnetic fields enclose the plasma so that the wall of the reactor does not melt. This only works because the outermost centimeters in the magnetically formed plasma edge are extremely well insulated. In this region, however, plasma instabilities, so-called edge localized modes (ELMs), occur frequently. During such an event, energetic particles from the plasma may hit the wall of the reactor, potentially damaging it.

Researchers from the Max Planck Institute for Plasma Physics (IPP) in Garching and from the Vienna University of Technology have now been able to show: There is an operating mode for fusion reactors that avoids this problem. Instead of large, potentially destructive instabilities, one intentionally accepts many small instabilities that do not pose a problem for the reactor’s wall.

“Our work represents a breakthrough in understanding the occurrence and prevention of large Type I ELMs,” says Elisabeth Wolfrum, research group leader at IPP in Garching, Germany, and professor at TU Wien. “The operation regime we propose is probably the most promising scenario for future fusion power plant plasmas.” The results have now been published in the journal Physical Review Letters.

The renaissance of a disregarded mode of operation

In a toroidal tokamak fusion reactor, ultra-hot plasma particles move at high speeds. Powerful magnetic coils ensure that the particles remain confined instead of hitting the reactor wall with destructive force. “However, you don’t want to isolate the plasma perfectly from the reactor wall either; after all, new fuel has to be added and the helium produced during fusion has to be removed,” explains Friedrich Aumayr, professor of Ion & Plasma Physics at the Institute of Applied Physics of TU Wien in Vienna, Austria.

The details of the dynamics inside the reactor are complicated: The motion of the particles depends on plasma density, temperature and magnetic field. Depending on how one chooses these parameters, different regimes of operation are possible. A long-standing collaboration between the TU Vienna group of Friedrich Aumayr and the IPP Garching group coordinated by Elisabeth Wolfrum now lead to in an operating regime that can prevent the particularly destructive plasma instabilities called type-I ELMs.

Already a few years ago, experiments have shown a recipe against the dangerous Type-I ELMs: the plasma is slightly deformed by the magnetic coils so that its plasma cross-section is no longer elliptical but resembles a rounded triangle. Simultaneously, the density of the plasma is increased, especially at the edge.

“At first, however, this was thought to be a scenario that only occurs in currently running smaller machines such as ASDEX Upgrade at IPP in Garching and is irrelevant for a reactor,” explains Lidija Radovanovic, who is currently working on her Ph.D. thesis on this topic at TU Wien. “However, with new experiments and simulations, we have now been able to show: The regime can prevent the dangerous instabilities even in parameter ranges foreseen for reactors.”

Due to the triangular shape of the plasma and the controlled injection of additional particles at the plasma edge, many small instabilities occur—several thousand times per second. “These small particle bursts hit the wall of the reactor faster than it can heat up and cool down again,” says Georg Harrer, lead author of the paper. “Therefore, these individual instabilities do not play a major role for the reactor wall.” But as the team has been able to show through detailed simulation calculations, these mini-instabilities prevent the large instabilities that would otherwise cause damage.

“It’s a bit like a cooking pot with a lid, where the water starts to boil,” Georg Harrer explains. “If pressure keeps building up, the lid will lift and rattle heavily due to the escaping steam. But if you tilt the lid slightly, then steam can continuously escape, and the lid remains stable and doesn’t rattle.” This fusion reactor operation regime can be implemented in a variety of reactors—not only at the ASDEX Upgrade reactor in Garching, but also at ITER, currently under construction in France, or even in future DEMO fusion plants.

The research described is part of the Austrian fusion research program [email protected]ÖAW and was carried out within the EU project EUROfusion.


Citation:
A new solution to one of the major problems of fusion research (2022, October 11)