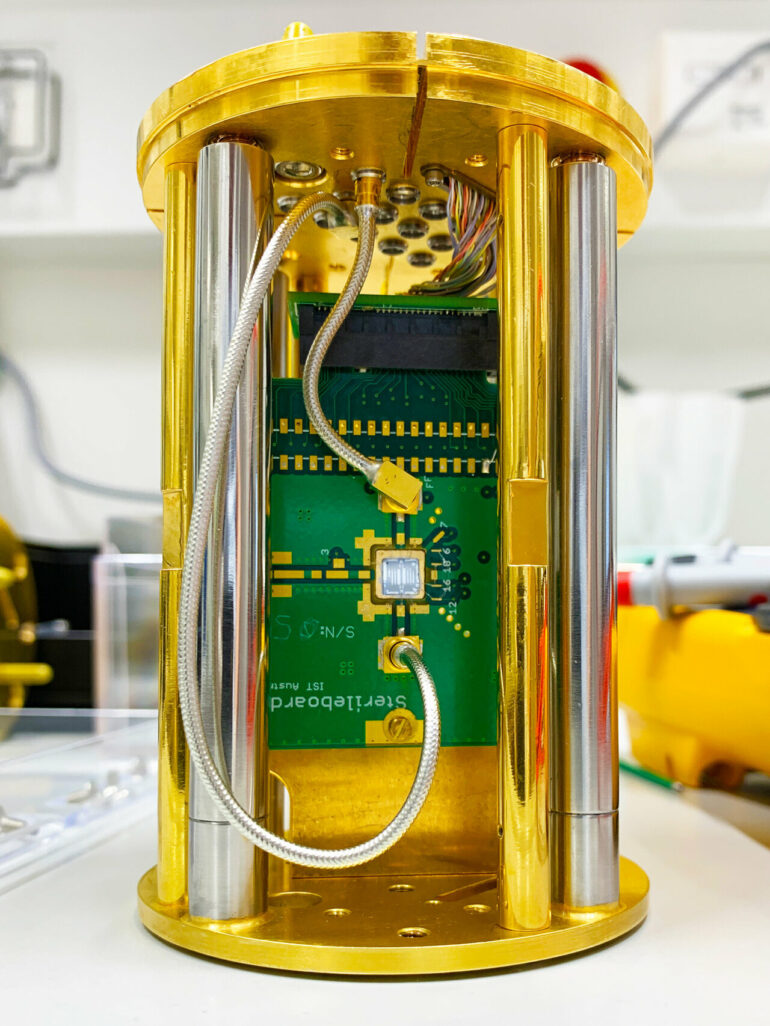 Semiconductors are the foundation of modern technology while superconductors with their zero electrical resistance could become the basis for future technologies, including quantum computers. So-called “hybrid structures”—carefully crafted sandwiches made from superconductors and semiconductors—may lead to new quantum effects. However, convincing observations have remained elusive. Now, researchers at Institute of Science and Technology Austria (ISTA) with NYU collaborators found a way to probe such “super-semi sandwiches” and to reveal what is going on.

“There is an international race to identify the best platform for controlling and processing quantum information for quantum computers, where superconductors play a prominent role,” says Duc Phan, Ph.D. student at the Institute of Science and Technology Austria (ISTA) and first author of a new paper now published in Physical Review Letters. “Microsoft is working on topological qubits using superconductor-semiconductor sandwiches. However, before we can use them, we must understand the fundamental physics behind them.”

Phan and his ISTA colleagues Jorden Senior and Andrew Higginbotham from the Condensed Matter and Quantum Circuits group conducted this study in close collaboration with partners from New York University and with theory support from Areg Ghazaryan and Maksym Serbyn from ISTA’s Quantum Dynamics group. They developed a technique to probe the quantum interactions in super-semi sandwiches paving the way for new applications like topological quantum bits based on so-called Majorana zero modes.

For their experiment, the researchers created a microscopic sandwich made of an aluminum (Al) superconductor on top of an indium-arsenic (InAs) semiconductor. Superconductors are materials that have no electrical resistance. For that to happen, they are cooled down to close to absolute zero temperature. Semiconductors like InAs or silicon can be insulating or conduct electricity depending on their environment and applied electric field.

Just like in a conventional sandwich that becomes more than the sum of its parts, the combined properties of Al and InAs become modified in super-semi sandwiches. At the interface between the Al superconductor and the InAs semiconductor, the proximity effect spills the superconductivity into the semiconductor creating new quantum states there. However, until now researchers had a hard time studying them because they could not be probed directly because of being concealed by a presence of the Al superconducting layer.

“We found that by sending a current alternating billions of times a second through the vicinity of the sandwich, we could make the superconductor’s veil partially transparent and get feedback about the properties of the semiconductor,” explains Senior. “We also applied a magnetic field to create new quantum states we were looking for and developed a new model that explained our observations.”

A new level of detail

This first experimental result of the Higginbotham group since its establishment at ISTA lays the groundwork to study superconductor-semiconductor hybrid structures at a new level of detail. “The parameters we can infer from this could provide much-needed guidance to construct topological quantum bits based on Majorana zero modes,” says Jorden. He also highlights that “ISTA is very well placed in this developing field because here experimental expertise, theoretical understanding, as well as excellent infrastructure provided by the state-of-the-art clean room—the kitchen for sandwich production—come together.”

The risks of low-speed impacts with liquids

Phan and his colleagues are excited about what insights they will gain with their novel probing technique and what future applications may become possible once the fundamental physics of this exotic sandwich has been understood.

Provided by
Institute of Science and Technology Austria