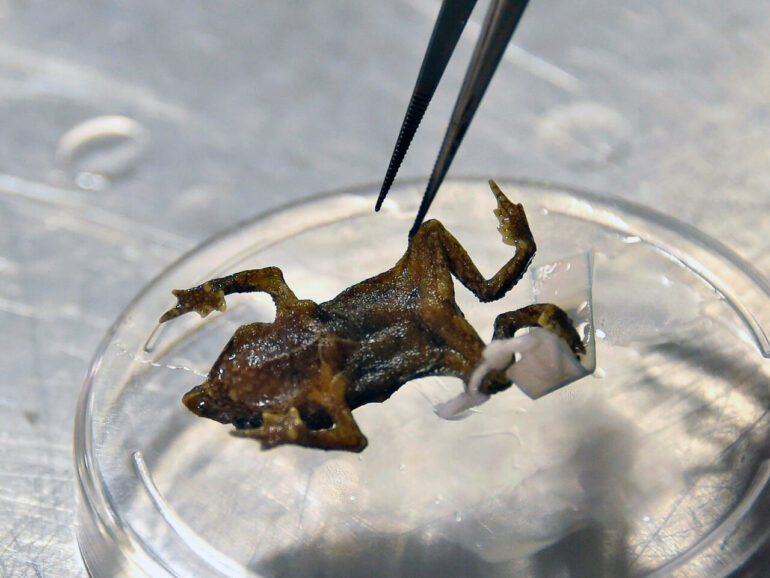 Ecuadoran biologist Jorge Brito was trekking through the forest when he heard what he thought was the chirp of a cricket.

What he found changed a century of scientific belief.

“At first I thought it was some sort of cricket out there vocalizing, but then I paid attention,” said Brito, from Ecuador’s national biodiversity institute.

It was, in fact, a type of brown toad with rough skin called Rhinella festae that has a prominent nose and had been considered mute since it was first discovered 100 year ago.

“While it did not inflate its vocal sack, you could see a small flicker” on its chin, said Brito.

He caught it and took it to a laboratory to study with his colleague Diego Batallas.

“The first time I heard it, I said: Wow, that’s not the sound of a toad, it’s like a little bird,” Batalla told AFP.

The toad, which measures between 45 and 68 millimeters in length, lives in the mountainous Ecuadoran regions of Cutucu and Condor, extending over the border into the Amazonian region of Peru.

The discovery was first reported in February in Neotropical Biodiversity magazine, where Brito and Batallas described the sound made by the toad.

“It is the first time this unique song of the Rhinella festae has been recorded and it’s surprising because it shouldn’t sing,” Batallas told AFP.

The toad does not have the vocal sack that allows most amphibians to amplify their calls so that they can be heard up to one kilometer away.

“The fact that this species can sing (without the vocal sack) makes it unique,” added Batallas, who used to sing in a choir.

Batallas said that the faint sound emitted by the Rhinella festae demonstrates that some species of amphibians could have evolved in such a way—perhaps as an anti-predator measure—as to “not need their song to be heard very far away.”

In the case of the Rhinella festae, it emits a sound as a greeting, whereas other species of toad croak as part of a mating ritual or as a warning.

“It’s a very subtle sound and very difficult to hear in nature.”

Ecuador has registered 658 different species of amphibians, of which 623 are toads or frogs and almost 60 percent of those are at risk or in danger of disappearing.

Only Brazil and Colombia have more species of amphibians than Ecuador.