Compact electron accelerator reaches new speeds with nothing but light 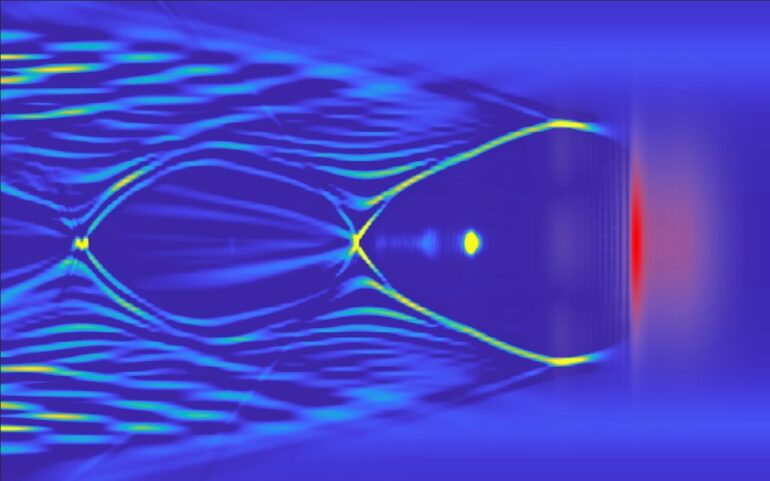 Scientists harnessing precise control of ultrafast lasers have accelerated electrons over a 20-centimeter stretch to speeds usually reserved for particle accelerators the size of 10 football fields.

A team at the University of Maryland (UMD) headed by Professor of Physics and Electrical and Computer Engineering Howard Milchberg, in collaboration with the team of Jorge J. Rocca at Colorado State University (CSU), achieved this feat using two laser pulses sent through a jet of hydrogen gas. The first pulse tore apart the hydrogen, punching a hole through it and creating a channel of plasma. That channel guided a second, higher power pulse that scooped up electrons out of the plasma and dragged them along in its wake, accelerating them to nearly the speed of light in the process.

With this technique, the team accelerated electrons to almost 40% of the energy achieved at massive facilities like the kilometer-long Linac Coherent Light Source (LCLS), the accelerator at SLAC National Accelerator Laboratory. The paper was accepted to the journal Physical Review X on August 1, 2022.

“This is the first multi-GeV electron accelerator powered entirely by lasers,” says Milchberg, who is also affiliated with the Institute of Research Electronics and Applied Physics at UMD. “And with lasers becoming cheaper and more efficient, we expect that our technique will become the way to go for researchers in this field.”

Motivating the new work are accelerators like LCLS, a kilometer-long runway that accelerates electrons to 13.6 billion electron volts (GeV)—the energy of an electron that’s moving at 99.99999993% the speed of light. LCLS’s predecessor is behind three Nobel-prize-winning discoveries about fundamental particles. Now, a third of the original accelerator has been converted to the LCLS, using its super-fast electrons to generate the most powerful X-ray laser beams in the world. Scientists use these X-rays to peer inside atoms and molecules in action, creating videos of chemical reactions. These videos are vital tools for drug discovery, optimized energy storage, innovation in electronics, and much more.

Accelerating electrons to energies of tens of GeV is no easy feat. SLAC’s linear accelerator gives electrons the push they need using powerful electric fields propagating in a very long series of segmented metal tubes. If the electric fields were any more powerful, they would set off a lightning storm inside the tubes and seriously damage them. Being unable to push electrons harder, researchers have opted to simply push them for longer, providing more runway for the particles to accelerate. Hence the kilometer-long slice across northern California. To bring this technology to a more manageable scale, the UMD and CSU teams worked to boost electrons to nearly the speed of light using—fittingly enough—light itself.

“The goal ultimately is to shrink GeV-scale electron accelerators to a modest size room,” says Jaron Shrock, a graduate student in physics at UMD and co-first author on the work. “You’re taking kilometer-scale devices, and you have another factor of 1,000 stronger accelerating field. So, you’re taking kilometer-scale to meter scale, that’s the goal of this technology.”

Creating those stronger accelerating fields in a lab employs a process called laser wakefield acceleration, in which a pulse of tightly focused and intense laser light is sent through a plasma, creating a disturbance and pulling electrons along in its wake.

“You can imagine the laser pulse like a boat,” says Bo Miao, a postdoctoral fellow in physics at the University of Maryland and co-first author on the work. “As the laser pulse travels in the plasma, because it is so intense, it pushes the electrons out of its path, like water pushed aside by the prow of a boat. Those electrons loop around the boat and gather right behind it, traveling in the pulse’s wake.”

Laser wakefield acceleration was first proposed in 1979 and demonstrated in 1995. But the distance over which it could accelerate electrons remained stubbornly limited to a couple of centimeters. What enabled the UMD and CSU team to leverage wakefield acceleration more effectively than ever before was a technique the UMD team pioneered to tame the high-energy beam and keep it from spreading its energy too thin. Their technique punches a hole through the plasma, creating a waveguide that keeps the beam’s energy focused.

“A waveguide allows a pulse to propagate over a much longer distance,” Shrock explains. “We need to use plasma because these pulses are so high energy, they’re so bright, they would destroy a traditional fiber optic cable. Plasma cannot be destroyed because in some sense it already is.”

Their technique creates something akin to fiber optic cables—the things that carry fiber optic internet service and other telecommunications signals—out of thin air. Or, more precisely, out of carefully sculpted jets of hydrogen gas.

A conventional fiber optic waveguide consists of two components: a central “core” guiding the light, and a surrounding “cladding” preventing the light from leaking out. To make their plasma waveguide, the team uses an additional laser beam and a jet of hydrogen gas. As this additional “guiding” laser travels through the jet, it rips the electrons off the hydrogen atoms and creates a channel of plasma. The plasma is hot and quickly starts expanding, creating a lower density plasma “core” and a higher density gas on its fringe, like a cylindrical shell. Then, the main laser beam (the one that will gather electrons in its wake) is sent through this channel. The very front edge of this pulse turns the higher density shell to plasma as well, creating the “cladding.”

“It’s kind of like the very first pulse clears an area out,” says Shrock, “and then the high-intensity pulse comes down like a train with somebody standing at the front throwing down the tracks as it’s going.”

Using UMD’s optically generated plasma waveguide technique, combined with the CSU team’s high-powered laser and expertise, the researchers were able to accelerate some of their electrons to a staggering 5 GeV. This is still a factor of 3 less than SLAC’s massive accelerator, and not quite the maximum achieved with laser wakefield acceleration (that honor belongs to a team at Lawrence Berkeley National Labs). However, the laser energy used per GeV of acceleration in the new work is a record, and the team says their technique is more versatile: It can potentially produce electron bursts thousands of times per second (as opposed to roughly once per second), making it a promising technique for many applications, from high energy physics to the generation of X-rays that can take videos of molecules and atoms in action like at LCLS. Now that the team has demonstrated the success of the method, they plan to refine the setup to improve performance and increase the acceleration to higher energies.

“Right now, the electrons are generated along the full length of the waveguide, 20 centimeters long, which makes their energy distribution less than ideal,” says Miao. “We can improve the design so that we can control where they are precisely injected, and then we can better control the quality of the accelerated electron beam.”

While the dream of LCLS on a tabletop is not a reality quite yet, the authors say this work shows a path forward. “There’s a lot of engineering and science to be done between now and then,” Shrock says. “Traditional accelerators produce highly repeatable beams with all the electrons having similar energies and traveling in the same direction. We are still learning how to improve these beam attributes in multi-GeV laser wakefield accelerators. It’s also likely that to achieve energies on the scale of tens of GeV, we will need to stage multiple wakefield accelerators, passing the accelerated electrons from one stage to the next while preserving the beam quality. So there’s a long way between now and having an LCLS type facility relying on laser wakefield acceleration.”