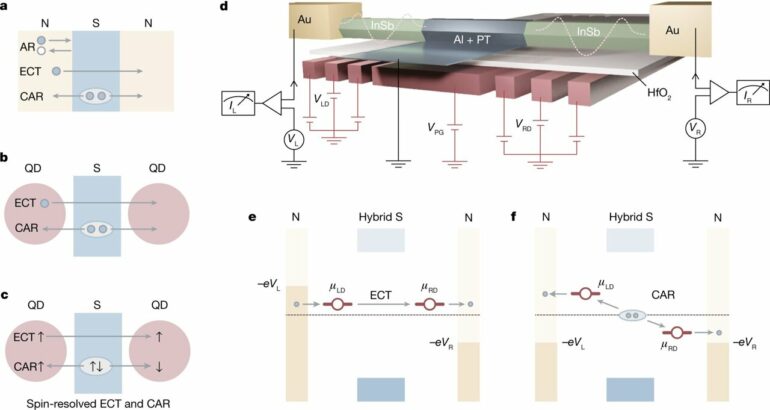 Scientists from QuTech and Eindhoven University of Technology have taken a next step in qubit research. Qubits are one of the building blocks of a future quantum computer. The researchers—including Sasa Gazibegovic, Ghada Badawy and Erik Bakkers from TU/e—have published their results in Nature on November 23, 2022.

A conventional computer performs operations using bits, which can be either zero or one. A quantum computer, on the other hand, uses quantum bits or “qubits.” Qubits can be photons, or electrons, or any system that can exist in so-called quantum states.

Because these states can exist simultaneously—as opposed to conventional bits—it allows you to hold much more information and access immense computing power. This is especially useful in calculations with many possible different outcomes, such as medicine research or materials science.

One of the several promising candidates as the building block of a future quantum computer is a so-called topological qubit, based on pairs of equal-spin electrons.

Although pairs of electrons with opposite spins (called Cooper pairs) can be found in most naturally occurring superconductors, materials hosting Cooper pairs made of equal-spin electrons have been much harder to engineer in a controlled way, despite promising progress, according to Dr. Tom Dvir, researcher at QuTech—a collaboration between the TU Delft and TNO—and one of the main authors of the publication in Nature.

In this publication the researchers now do demonstrate the existence of an equal-spin pairing by using quantum dots defined in a specially grown semiconductor nanowire.

“In this research, we have directly measured equal-spin pairing between spin-polarized quantum dots”, says Dvir. “The paired electrons are induced from a conventional superconductor into the semiconducting nanowire, whose properties enforce the equal-spin polarization.”

“We demonstrate the pairing by showing that breaking a Cooper pair can result in two electrons with equal spin polarization. Our results are very pure and demonstrate controllable detection of pairing between the quantum dots.”

Achieving pairing in a sequence of quantum dots is required for realizing a so-called artificial Kitaev chain of several quantum dots, which is a promising method towards using topological qubits.