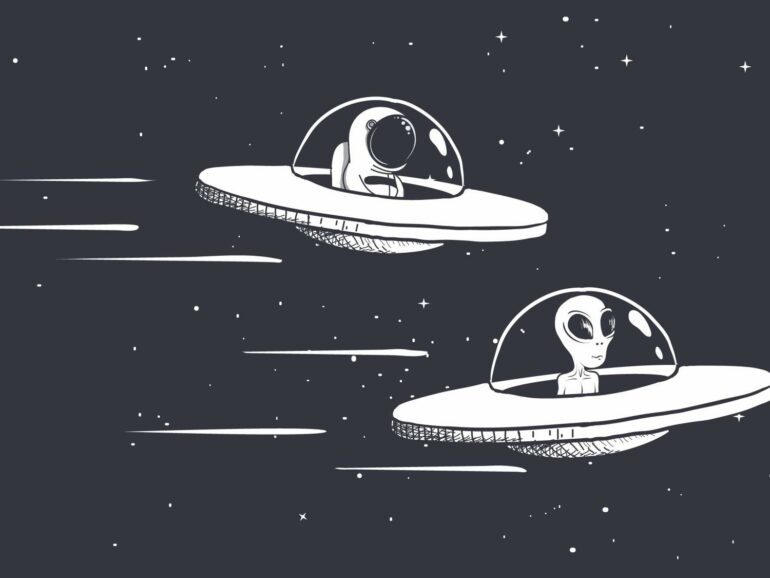 A look at history often provides some context for the present and might even inform the future, so it’s not surprising two Penn State faculty members’ review of Cold War-era print and television advertisements about flying saucers and UFOs prompted some themes—and one overarching business reality—that informs television and internet ads these days.

Plus, the research was simply “fun,” according to Matt McAllister, a professor of film production and media studies, who collaborated with Greg Eghigian, a professor of history. Their results, after reviewing more than 150 print and television ads from 1947 to 1989, were published in Advertising & Society Quarterly.

“Once you start looking for the ads, you really notice them—they pop out,” McAllister said.

Along with TV ads, McAllister and Eghigian reviewed print ads in databases from the Chicago Tribune and the New York Times over 40-plus years. The ads were analyzed for symbolic function and the characteristics flying saucers/UFOs played in advertising. Ads with similar functions were noted and those functions were then collated with each advertisement’s year of circulation and with developments both in the advertising industry and ufology, or the study of UFOs.

“It was a great collaboration between two different academic perspectives,” said McAllister.

Six themes emerged. They were:

Modern fashion and design, with circular esthetics used to evoke modern styles.Technological progress and utopias, meant to associate ads and products with advancements.Little green men as consumers, with ads featuring futuristic customers or even brand ambassadors.Alarming language and images in ads for flying saucer media, most commonly books about aliens visiting Earth that played on paranoia and became especially prevalent during the Cold War period.Using flying saucers for publicity stunts and camouflaged advertising forms, with saucer-shaped flyers dropped from the sky to ads that looked like flying-saucer news stories.UFOs representing consumer awe and transcendence, an approach that became more prominent in the 1980s and portrayed massive alien craft that mimicked portrayals in films like “Close Encounters of the Third Kind.”

The thematic analysis and grouping of findings into theme areas challenged the researchers’ creativity, and one bit of success always seemed to lead to another as discussion and findings led to further insights. Plus, the post-World War II era, when technology became more ubiquitous and the space race captured the attention of the public across the world, provided necessary context to the flying saucer and UFO ads.

“I think it’s been largely forgotten just how much mainstream media attention was paid to flying saucers, UFOs and the prospect of alien visitors,” Eghigian said. “Especially in the ’50s, ’60s and ’70s, they were big news—a regular feature of newspapers, radio and TV.”

As both experts stretched themselves a bit during the collaboration, they learned things, were surprised by others and, ultimately, found a connection with the advertising industry these days.

“What shocked me the most was we saw all the garish ads for UFO books in The New York Times, which is often academic or staid,” McAllister said. “To see page after page of carnival barker-type things was jarring and unexpected, but it was post World War II, so there’s a lot going on with the space race, technological advancement and competition not only between the United States and Soviet Union but print and televised advertising.”

McAllister said those ads were likely influenced by pressure print outlets felt from TV, which was gobbling up advertising dollars at the time—clearly a threat to the newspapers’ bottom line.

“It’s not unlike the competition between television and the internet now,” McAllister said. “You often see these advertising-related historical shifts. Plus, things like dealing with change and stunt marketing remain an important part of advertising, just as they were with flying saucers and UFOs.”

Religion is not the factor that most influences rejection of evolutionary theory in schools, study says

While ads with flying saucers and UFOs may use them differently than in the past, desired messages and reactions from those who place the ads have not changed. Emotion and sensation continue to motivate purchases, and advertisers consistently seek to share messages about quality and technology. Plus, the appetite of consumers for big events has never waned.

Still, McAllister said, the business of ads remains an enduring aspect of the relationship between advertising mediums. In the 40 years of content for the research, there was an ongoing conflict between newspapers and TV, prompting changes to the kind of advertisements newspapers accepted. Although not specifically part of their analysis, he said TV has been on the other side of that relationship in recent years with the growth of the internet and advertisers moving there to find bigger audiences.