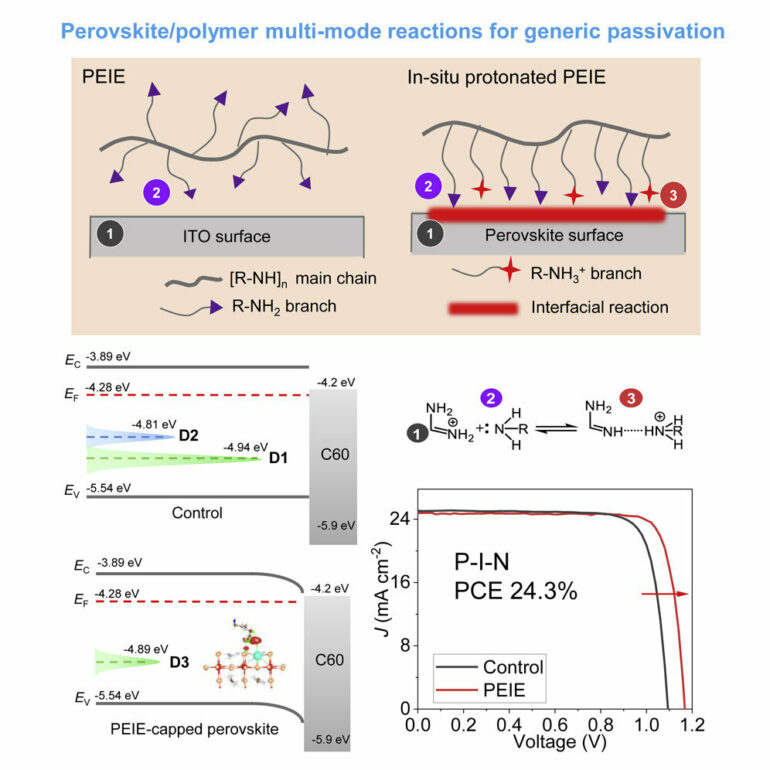 As a promising photovoltaic material, metal halide perovskite yields high efficiency in solar cells. However, the deep-level traps of minority carriers at the surface of the p-i-n perovskite solar cells can suppress nonradiative recombination. The precise passivation of deep-level traps has been a major focus in raising the power conversion efficiency (PCE) to the theoretical Shockley-Queisser limit.

Recently, a research group led by Prof. Xu Jixian and Prof. Wu Xiaojun from the University of Science and Technology of China (USTC) of the Chinese Academy of Sciences (CAS), and their collaborators from Suzhou Institute of Nano-Tech and Nano-Bionics of CAS revealed the perovskite/polymer multi-mode interactions and their correlation with the passivation of the deep-level traps, and discovered a new in-situ protonation process that significantly reduces the deep-level traps of minority carriers. This work was published in Joule.

Previously known interaction modes at the perovskite/polyethyleneimine (PEI) interface include conventional physisorption and metal-chelation, which either shows minor passivation effects or tends to passivate the majority carrier traps. To overcome these problems, the researchers used high-sensitivity X-ray photoelectron spectroscopy (XPS) and sum-frequency-generation spectroscopy to identify in-situ protonation process of the amine group at the perovskite/PEI surface.

Additionally, the researchers used the passivation strategy in p-i-n perovskite solar cells of different band gaps, all of which showed significant improvement in PCE.

The perovskite/polymer multi-mode interactions revealed in this work provide a possible way for developing a universal passivation strategy and improving power conversion efficiency in the future.


Provided by
Chinese Academy of Sciences