Nascent gas giant planets may be lurking in dusty disk 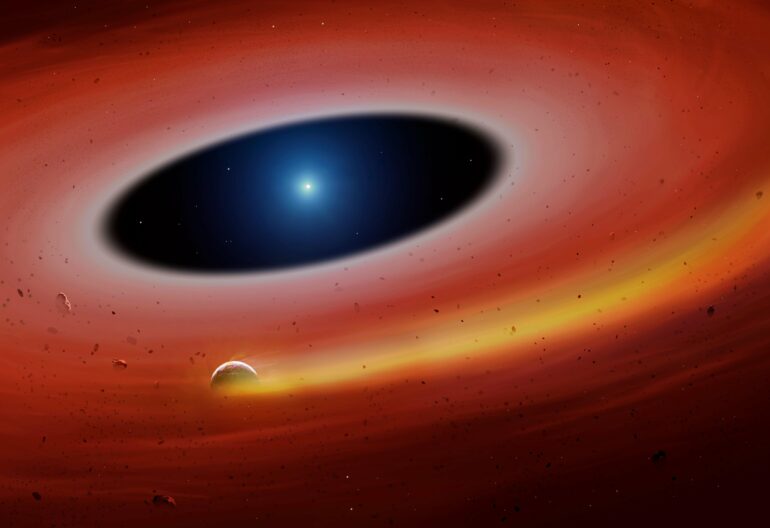 Nurseries for new planets, protostellar disks are oblate swathes of gas and dust that rotate about newly formed stars. The Earth and the other planets in the solar system were birthed from such a disk.

Now, Satoshi Ohashi of the RIKEN Star and Planet Formation Laboratory and his colleagues have studied a protostellar disk in one of the closest star-forming regions to Earth.

Using data from the Atacama Large Millimeter/submillimeter Array (ALMA) in Chile and the Jansky Very Large Array (VLA) in New Mexico, they found that the disk is 80–100 times wider than the distance from the sun to the Earth, a span known as an astronomical unit.

The disk is unstable and collapsing in a region roughly 20 astronomical units from its young star. The VLA had previously identified several clumps of matter in the same area, and their formation may be driven by this gravitational instability.

“These clumps may be the precursors of gas giant planets, since they are massive and dense,” says Ohashi. If this identification is correct, it would imply that planet formation can begin surprisingly early in protostellar disks.

Dust close to the star can reach a relatively warm -193 degrees Celsius (-315.4 Fahrenheit). But on the far side of the clumps, the dust temperature dropped sharply. This suggests that the clumps are blocking the star’s radiation, chilling any dust in their shadow. In the outermost parts of the disk, the dust temperature falls to around -263 degrees Celsius (-441.4 Fahrenheit)—just 10 degrees above absolute zero.

This shaded, cold environment may affect the chemical composition of planets that form in outer regions of the disk, Ohashi says.

This finding might help astrophysicists understand the origins of icy planets like Uranus and Neptune that orbit our own sun. “Our solar system is also suggested to have formed a shadowed region in the past,” says Ohashi.

The team now hopes to observe other protostellar disks, with greater spatial resolution and sensitivity, to assess whether this shadowing effect is common.

The research was published in The Astrophysical Journal.