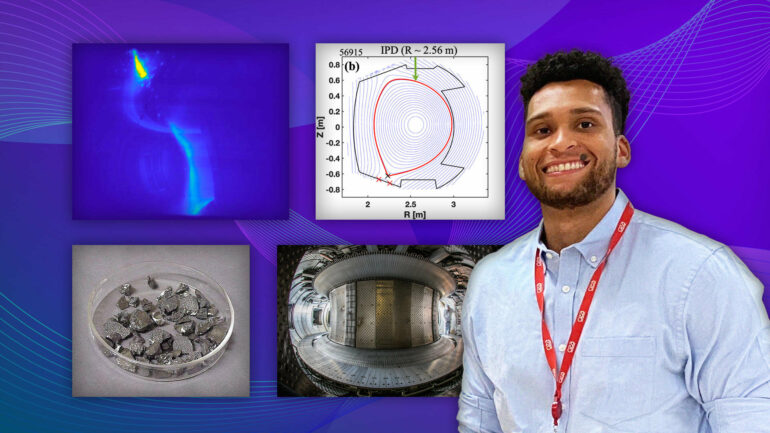 What is the connection between boron, an element in a common household cleaner, and tokamaks, ring-shaped fusion facilities that heat fuel to million-degree temperatures? Scientists at the U.S. Department of Energy’s (DOE) Princeton Plasma Physics Laboratory (PPPL) have conducted research showing that a PPPL-developed powder dropper can successfully drop boron powder into high-temperature plasma within tokamaks that have parts made of a heat-resistant material known as tungsten. Scientists want to confirm they can use this process to apply boron to tungsten parts because bare tungsten walls can hurt plasma performance if the plasma damages the tungsten.

“We need a way to deposit boron coatings without turning off the tokamaks’ magnetic field, and that’s what the powder dropper allows us to do,” said Grant Bodner, a postdoctoral researcher at PPPL who was the lead author of the research paper reporting the results in Nuclear Fusion. The research was performed using the W Environment in Steady-State Tokamak (WEST), operated by France’s Atomic Energy Commission (CEA). “WEST is one of the few full-tungsten environments that can help us test this technology at long pulses,” Bodner said.

Another reason the physicists performed their experiments using WEST is that its magnets are made of superconducting material that will feature in magnets inside future fusion devices. This material conducts electricity with little or no resistance and produces little excess heat so the magnets can operate without stopping for long periods of time, as future fusion reactors will have to do. The magnets create the forces that restrain the plasma so it can undergo fusion.

Fusion, the power that drives the sun and stars, combines light elements in the form of plasma—the hot, charged state of matter composed of free electrons and atomic nuclei—that generates massive amounts of energy. Scientists are seeking to replicate fusion on Earth for a virtually inexhaustible supply of power to generate electricity.

Scientists need a way to replenish the boron coatings while the machines are operating because future fusion facilities will not be able to shut down often for re-coating. “Dropping boron into a tokamak while it is operating is like cleaning your apartment while doing all the other things that you usually do in it,” said CEA scientist Alberto Gallo, who contributed to the research. “It’s very helpful—it means you don’t have to take extra time out of your usual activities to do the cleaning,” he said.

The powder dropper device is mounted to the top of the tokamak and uses precise actuators to move powdered material from their reservoirs to the tokamak’s vacuum chamber. This mechanism allows researchers to precisely set the rate and duration of the powder drops, which in other fusion facilities can include other performance-boosting materials like lithium. “Because of that flexibility, the dropper has the potential to be really useful in the future,” Bodner said.

The researchers were surprised to find that the boron laid down by the dropper did more than condition the inner tungsten surfaces. “We saw that when we dropped in the powder, the plasma confinement increased, meaning that it retains more of its heat, which aids the fusion process,” Bodner said.

The increased confinement was especially helpful because it occurred without the plasma entering a state known as H-mode (high-confinement mode), in which the confinement improves but the plasma is more likely to erupt with what are known as edge-localized modes, or ELMs. These ELMs move heat out of the plasma, reducing the efficiency of the fusion reactions and sometimes damaging internal components. “If we can use the dropper to get the good confinement of H-mode without actually entering H-mode and risking ELMs, that would be great for fusion reactors,” Bodner said.

In the future, the researchers want to test using the dropper only when necessary to maintain good plasma performance. “Adding any extra impurities, even boron, can reduce how much fusion power you get because the plasma becomes less pure,” Bodner said. “Therefore, we have to try to use the smallest amount of boron that can still produce the effects we want.”

Up a creek without paddle? Researchers suggest ‘gunwale bobbing’

Upcoming experiments will focus on how much boron is actually coating the tungsten surfaces. “We want to measure these amounts so we can really quantify what we’re doing and extend these results in the future,” Bodner said.