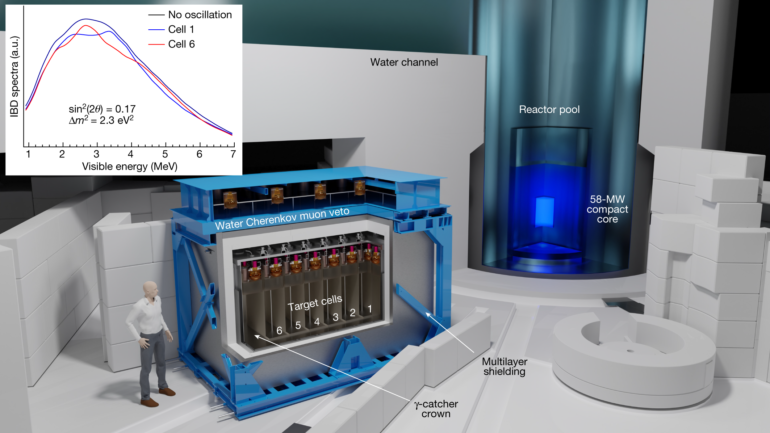 After several years of operation, the STEREO collaboration published the final results of their antineutrino studies. With their data, the researchers excluded hints for the existence of sterile neutrinos, an additional neutrino state expected in many theories. The result, which appears in the January 11 issue of Nature, has important implications for many areas of fundamental physics.

In modern particle physics all known elementary particles and their interactions are described in the so-called Standard Model of Particle Physics. The model includes neutrinos, particles invented 1930 by Wolfgang Pauli in order to comply with the universal energy conservation laws. Neutrinos are very light, electrically neutral and interact only via the electroweak force. Therefore, they are extremely hard to detect. A direct experimental detection didn’t take place until 1956.

Today three different types of neutrinos are known. These neutrinos can change their identity between these different states due to their very small, but non-zero mass. These so-called neutrino oscillations were established about two decades ago.

In 2011, increased precision led to an anomaly between the observed and predicted antineutrino flux emitted by nuclear reactors. This triggered the hypothesis of the existence of a supplementary neutrino state that would be sterile i.e. not interacting via the weak interaction. This particle could also possibly explain physical phenomena that are still not fully understood, such as dark matter.

To unambiguously test this hypothesis of sterile neutrinos and determine their properties, the STEREO experiment was designed and started operation in 2017 at the high-flux nuclear research reactor at the ILL Grenoble. A detector consisting of six identical elements was placed just 10 meters from the reactor core.

The project profited from the experience collected over several generations of reactor neutrino experiments. Shielded from the external environment, the cells of the detector were ideally positioned to search with unprecedented precision for the signature of sterile neutrinos: position dependent distortions in their energy distribution should appear at a short distance from the reactor.

Now, the STEREO collaboration, consisting of researchers from the Max-Planck-Institut für Kernphysik (MPIK) in Heidelberg, Germany and the French institutes CEA Saclay, CNRS, the universities Grenoble Alpes and Savoie Mont Blanc as well as the Institut Laue-Langevin (ILL) published their most recent results combining the full data set: The physicists confirmed an anomaly in the neutrino flux emitted by nuclear reactors, but sterile neutrinos are, however, not the cause of this.

“We were able to observe a total of more than 100,000 neutrinos in the years 2017 to 2020, but could not determine any trace of potential sterile neutrinos within these measurements,” explains Christian Buck, one of the lead researchers of the experiment from the MPIK. “Most likely the observed anomalies result from underestimated uncertainties in the nuclear data from the radioactive decays used for the flux prediction rather than the neutrino experiments itself.”

While this result rejects the sterile neutrino hypothesis quite strongly, it serves as a further support of the Standard Model and its neutrino content.

Besides the search for sterile neutrinos, the STEREO experiment also provides the most accurate measurement to date of the antineutrino spectrum from the fission of Uranium-235. It is intended to be used as a reference spectrum for future high precision reactor experiments, such as the determination of the mass hierarchy of neutrinos or the low-energy tests of the Standard Model. In addition, precision measurements of this kind might help to better understand the phenomena happening during a reactor shutdown, for instance.

The researchers at MPIK made significant contributions, both to the construction of the STEREO detector and in the analysis of the data. For example, the very special liquids in the detector were developed, produced and characterized at MPIK. In particular, the gadolinium-loaded liquid scintillator, which forms the heart of the detector, originates from MPIK.

ATLAS and CMS collaborations chase the invisible with the Higgs boson

Another crucial contribution are the very special filling systems and the light sensors for measuring the light signals after the neutrino reaction in the detector. In the field of analysis, the MPIK group was active in energy reconstruction, efficiency determination and analysis coordination.