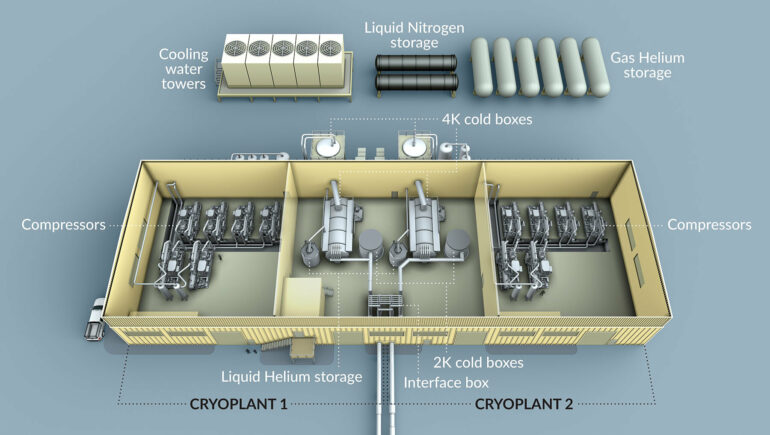 Today it only takes one and a half hours to make a superconducting particle accelerator at the Department of Energy’s SLAC National Accelerator Laboratory colder than outer space.

“Now you click a button and the machine gets from 4.5 Kelvin down to 2 Kelvin,” said Eric Fauve, director of the Cryogenic team at SLAC.

While the process is fully automated now, getting this accelerator, called LCLS-II, to 2 Kelvin, or minus 456 degrees Fahrenheit, took six years of designing, building, installing, and starting up an intricate system.

But, whereas LCLS can operate at room temperature, LCLS-II must be cooled to 2 Kelvin, just 4 degrees Fahrenheit above absolute zero, to become superconducting.

And that meant SLAC needed a team to focus on cold stuff.

Assembling a team to assemble a cryoplant

Before the LCLS-II cool down, there was no group devoted to cryogenics at SLAC.

“Our biggest challenge was that this was the first time we were doing this with a new team,” Fauve said.

The LCLS-II Cryogenic team, now consisting of 20 operators and engineers, formed in 2016 at SLAC to construct the facility that cools the accelerator: a cryogenic plant.

“This is a complicated system with many subsystems that work in tandem,” said Viswanath Ravindranath, lead cryogenic process engineer for LCLS-II.

“This collaboration allowed the LCLS-II project to benefit from the best cryogenic resources within the DOE Laboratories and elsewhere,” Fauve said.

The cryoplant is filled with helium, which is cooled and then pumped to LCLS-II. While every other element freezes below 4 Kelvin, helium can remain a fluid, and at 2 Kelvin, helium becomes superfluid, meaning it flows without viscosity. That fact, and superfluid helium’s ability to conduct heat better than any other known substance, make it the perfect refrigerant for cooling down a superconducting accelerator.

Before the cooling begins, trailers piled with hotdog-shaped tanks deliver gaseous helium at ambient temperature (about 300 Kelvin) to the cryoplant’s outdoor storage tanks. The cryoplant requires a total of four metric tons of helium.

But this helium arrives impure. Any impurities will eventually freeze and clog the system, so first purifiers must trap any moisture or unwanted gases, such as nitrogen, to achieve 99.999% helium.

After purification, compressors raise the helium’s pressure. The pressure and temperature of a gas are coupled: as pressure decreases, temperature also decreases. So, while helpful later, this incidentally raises helium’s temperature to 370 Kelvin.

Following compression, five large towers containing cooling water are used to lower helium’s temperature back down to 300 Kelvin. The gas then enters the cryoplant’s 4K cold box, which is a giant, uber-complicated helium refrigerator.

In the cold box, liquid nitrogen running 77 Kelvin knocks the helium down from 300 Kelvin to 80 Kelvin in a heat exchanger. In this device, the warm helium gas and colder liquid nitrogen travel in opposite directions while separated by a thin metal plate, transferring heat through the plate from the helium to the nitrogen. The plant uses 20 metric tons of liquid nitrogen every other day.

The helium then runs through a set of four turboexpanders. Now the initial gas-compressing step pays off: the turboexpanders expand the high-pressure gas, lowering its pressure enough to bring the helium all the way to 5.5 Kelvin.

However, the helium has more expanding to do before it can leave the cold box. It travels through a valve that has lower pressure on the other side. This lower pressure causes the gas to expand, lowering its pressure and bringing its temperature down to 4.5 Kelvin (hence the name of the 4K cold box), where it becomes a liquid.

This liquid helium is then sent through pipes to the accelerator’s cryomodules, where it cools the machine to 4.5 Kelvin.

Once the 4K cold box was up and running, it took the Cryogenic team one week to cool LCLS-II from room temperature to 4.5 Kelvin, which it reached for the first time on March 28, 2022. But that’s not cold enough!

To reach 2 Kelvin, the 4.5 Kelvin helium undergoes yet another (final) expansion through a valve in the accelerator’s cryomodules. Again, the lower pressure on the other side of the valve causes helium’s pressure to drop. This cools helium to the goal temperature of 2 Kelvin.

Creating the low pressure inside the cryomodule is a feat in itself.

“The magic happens when it goes through that valve, but only because we have a train of cold compressors that maintains the pressure in the cryomodule at very low pressure,” Fauve said. This set of five compressors stationed after the valve create the pivotal pressure difference on either side of the valve.

Towards quantum states of sound

After months of turning on and configuring this cooling system, LCLS-II finally reached 2 Kelvin on April 15.

“Everything was possible because of all the hard work over the years from so many smart and dedicated people,” said Swapnil Shrishrimal, cryogenic process and controls engineer for LCLS-II. “Being a small team, as well as a young team, we are very proud of the system we commissioned.”

When the electron beam is on and being accelerated by the cryomodules, the 2 Kelvin helium will absorb heat from the accelerator, boil, and turn back into gas. That gas is injected back into the 4K cold box to help cool warmer helium.

“We don’t want to waste the cooling capacity, so we try to recover as much of it as possible,” Ravindranath said. The system recycles the helium, which is expensive, although essential for long-term operation.

The Cryogenic team actually built two cryoplants, which share a building, but LCLS-II only uses one. The second cryoplant will support planned upgrades to LCLS-II. When both cryoplants are on they will use approximately 10 megawatts of electrical power.

“The years of expertise and support of our partner labs allowed us to do this,” Shrishrimal said. Fauve also credits the team’s success to their extensive planning and dedication. The entire Cryogenic team stayed on site during the pandemic to continue bringing the plant to life.

“Even when SLAC was shut down, if you were at the cryoplant you would not be able to tell the difference before and during COVID,” Fauve said, except for the masks and social distancing, of course.

LCLS-II is expected to produce its first X-rays early next year. The Cryogenic team feels confident they will continue to run their very complicated refrigerator with ease.

“It’s a pretty nice and easy operation now because everything is automated,” Shrishrimal said.