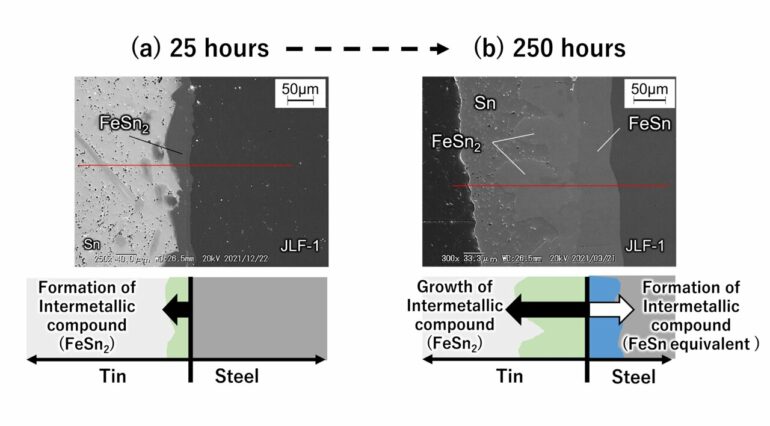 This discovery has paved the way for the development of a liquid metal tin divertor, which is an advanced heat-removal component of fusion reactors. A device called a divertor is installed in the fusion reactors to maintain the purity of the plasma. For divertors, there has been demand for liquid metals that can withstand extremely large heat loads from high-temperature plasma.

Fusion reactors are being actively developed throughout the world as a form of sustainable zero-carbon energies because their fuel can be extracted from an inexhaustible supply of seawater. Also, they do not emit greenhouse gases. In addition to the construction of the tokamak (ITER), which is a collaboration of seven of the world’s leading countries and regions (Japan, EU, United States, South Korea, China, Russia, and India), fusion development by the private sector is also accelerating.

One of the most important components in these fusion reactors is the divertor, a component that gasifies impurities in the plasma and sends the gas to an exhaust pump. During operation of a fusion reactor, some of the structural components of the divertor are exposed to extremely large heat loads at the same level as the “space shuttle when entering the atmosphere.” Researchers are working to develop a solid divertor in which a block of heat-resistant material such as tungsten is placed in contact with the plasma and cooled with high-temperature, high-pressure water.

This solid divertor system is also used in the ITER project and the prototype fusion reactors. Conversely, as an innovative mechanism to withstand the large heat load from plasma, researchers have also considered the concept of a liquid metal divertor, which protects the divertor from plasma by covering the structural material of the divertor with a liquid metal that possesses excellent cooling performance.

As shown in Fig. 1(a), tin (Sn) is a metal that has been used in various ways in our daily lives; for example, as a material for tableware and as a component of solder. Tin has a relatively low melting point of 232°C and is suitable for use in a liquid state as shown in Fig. 1(b). Another property of tin is that its vapor pressure at high temperatures is lower than that of other liquid metals.

Therefore, as shown in Fig. 1(c), when liquid metal tin is used as a coolant to cover and protect the structural material surface of the liquid metal divertor of a fusion reactor, it is resistant to evaporation even if it is heated by plasma and reaches a high temperature. Also any evaporated metal is less likely to mix with the plasma. However, the corrosion of structural materials is a technical issue that has been of concern to the researchers.

Kondo’s laboratory has focused on the chemical coexistence of various structural and functional materials. The laboratory has paid particular attention to liquid metal coolants attracting attention in the field of next-generation energy such as fusion reactors. Researchers concentrated on liquid metal tin, which reveals the inconvenient property of being highly reactive at high temperatures. They worked to clarify the corrosion mechanism of fusion reactor structural materials and to discover materials that exhibit corrosion resistance.

What is high-temperature liquid metal tin and what causes its intense corrosiveness?

When reduced activation ferritic martensitic steel comes into contact with liquid metal tin, the incubation period before corrosion begins is very short. As shown in Figures 2(a) to 2(b), the researchers determined that the steel contains iron (Fe) which reacts with high-temperature tin to corrode the material while rapidly forming intermetallic compounds (FeSn2, etc.) on the tin.

In addition to containing iron, reduced activation ferritic martensitic steel also contains elements such as chromium and tungsten that do not easily react with tin. Therefore, the steel has a lower corrosion rate than that of pure iron. However, after ten days at 500°C, the steel forms an intermetallic compound with a thickness of about 155 micrometers and corrodes. When extrapolating these numbers to one year, the thickness could reach the order of millimeters, which is a very large corrosion rate. At 600°C, the researchers found that thinning due to corrosion became even more severe. At this time, the researchers also found that corrosion progresses due to the inward diffusion of tin into the microstructure of the steel.

Associate Professor Masatoshi Kondo of Tokyo Institute of Technology, who leads the research team, gave the following explanation: “Although liquid metal tin is an excellent coolant with a variety of properties, it has the drawback of corroding structural materials. By clarifying the corrosion mechanism, we hope to promote the use of liquid metal tin not only for fusion energy but also for solar thermal power plants.”

Pursuing this theory, the researchers tested iron oxide (Fe2O3) and chromium oxide (Cr2O3) for compatibility with liquid tin at 500°C. The results are shown in Figure 3. When immersing the iron oxide sintered material, tin partially penetrated into the pores that were created during firing. However, the thickness of the reaction structure with tin on the material surface was about 1 micrometer. This was an extremely thin reaction which is only about 1% that of reduced activation ferritic steel.

Moreover, when examining the sintered material of chromium oxide, it can be seen that the reaction structure with tin on the surface is very thin. In this way, the researchers found that even a metal element such as iron, which easily reacts with tin, can be significantly suppressed by prior reaction with oxygen to form an oxide.

“The operating environment of a liquid tin divertor in a fusion reactor is under extremely harsh conditions in which corrosion by liquid tin and irradiation of fusion neutrons are superimposed,” explained Professor Kondo, who leads research by the Japanese team in Task 3 of the U.S.-Japan Science and Technology Cooperation Program: FRONTIER Project).

“In this project, we are collaborating with the project team members from Oak Ridge National Laboratory in the United States to investigate the effects of radiation on the corrosion reaction dynamics of steel with liquid tin,” he added.

The discoveries discussed in this article clarified the cause and mechanism of corrosion of liquid metal tin, which has relatively strong corrosiveness. This research will contribute significantly to the achievement of a carbon-neutral society by assisting in the development of highly reliable advanced heat-receiving equipment for fusion reactors.