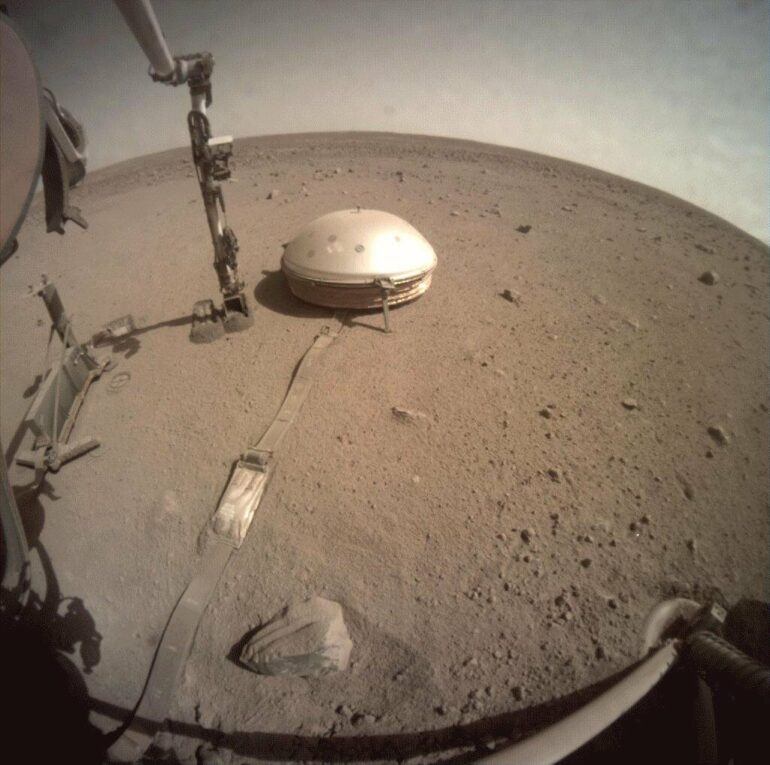 Late on the Earth night of May 4, or Sol 1222 on Mars, the seismometer aboard NASA’s InSight Mars Lander detected a quake on the Red Planet, with reverberations lasting many hours. The marsquake was at least five times as large as the next largest quake recorded on the planet, according to new research published Wednesday in Geophysical Research Letters. Additional research related to the record marsquake is also being presented this week at AGU’s Fall Meeting, in Chicago from 12 to 16 December and online everywhere.

“This was definitely the biggest marsquake that we have seen,” said Taichi Kawamura, lead author and planetary scientist at the Institut de physique du globe de Paris, France. Kawamura is co-leader, along with co-author and seismologist John Clinton at the Swiss Federal Institute of Technology in Zürich, of the marsquake service (MQS), an international team that monitors and evaluates the seismological data recorded by the NASA InSight Mars Lander.

“The energy released by this single marsquake is equivalent to the cumulative energy from all other marsquakes we’ve seen so far, and although the event was over 2000 kilometers (1200 miles) distant, the waves recorded at InSight were so large they almost saturated our seismometer,” said Clinton.

Seismology on Mars can give scientists a better idea about what lies under the planet’s surface—including water—and how its crust and deep interior are structured. Like on Earth, most detected marsquakes are thought to occur due to fault movements.

“For the first time we were able to identify surface waves, moving along the crust and upper mantle, that have traveled around the planet multiple times,” Clinton noted.

The waves from the record-breaking quake lasted about 10 hours—quite a while, considering no previous marsquakes exceeded an hour.

It was also curious because the epicenter was close to but outside the Cerberus Fossae region, which is the most seismically active region on the Red Planet. The epicenter did not appear to be obviously related to known geologic features, although a deep epicenter could be related to hidden features lower in the crust.

Marsquakes are often divided into two different types—those with high-frequency waves characterized by rapid but shorter vibrations, and those of low-frequency, when the surface moves slowly but with larger amplitude. This recent seismic event is rare in that it exhibited characteristics of both high- and low-frequency quakes. Further research might reveal that previously recorded low- and high-frequency quakes are merely two aspects of the same thing, Kawamura said.

The new research is the first to describe and analyze the data from this large quake, which were released by the Mars Seismic Experiment for Interior Structure (SEIS) data service, NASA Planetary Data System (PDS) and the Incorporated Research Institutions for Seismology (IRIS), together with the MQS catalog, in early October.

InSight is thought to be near its operational end because dust has progressively covered its solar panels and reduced its power during the four years since its landing in November 2018. “We are impressed that almost at the end of the extended mission, we had this very remarkable event,” Kawamura said. Based on the data gathered from this quake, “I would say this mission was an extraordinary success,” he continued.

Kawamura said this publication is the first of a number of papers, both from his team and from partners, including NASA’s Jet Propulsion Laboratory, ETH Zurich, France’s National Centre for Space Studies and UCLA that will be published in AGU’s special collection on the event.