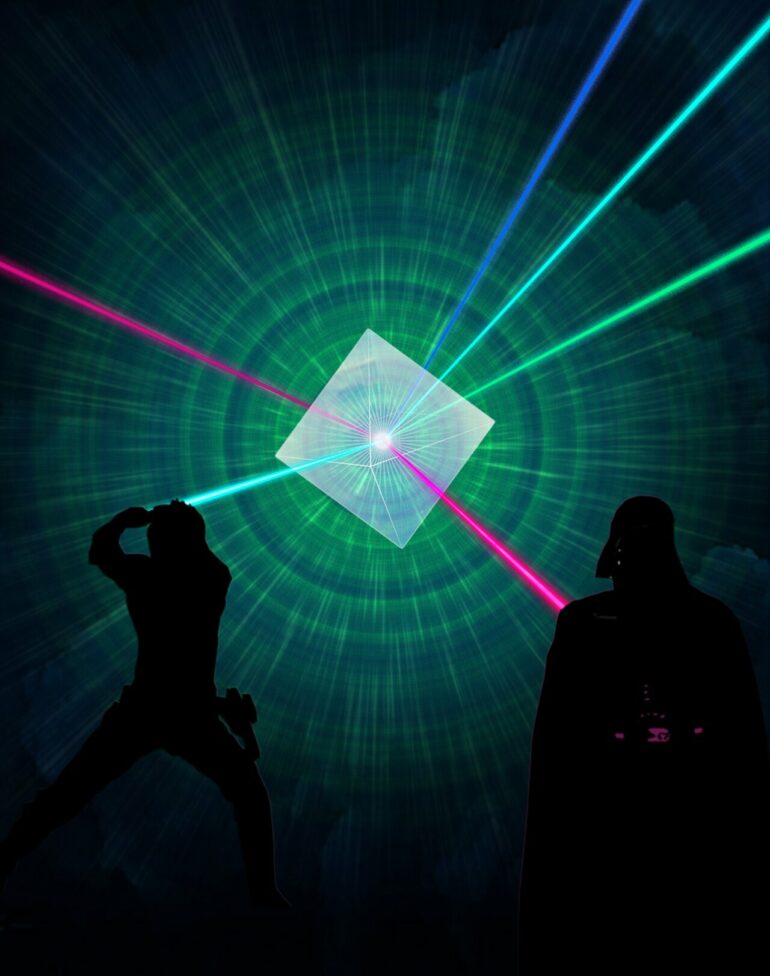 Unlike fictional laser swords, real laser beams do not interact with each other when they cross—unless the beams meet within a suitable material allowing for nonlinear light-matter interaction. In such a case, wave mixing can give rise to beams with changed colors and directions.

Wave-mixing processes between different light beams are one cornerstone of the field of nonlinear optics, which has become firmly established since lasers have become widely available. Within a suitable material such as particular crystals, two laser beams can “feel each other’s presence.” In this process, energy and momentum can be exchanged, giving rise to additional laser beams emerging from the interaction zone in different directions and with different frequencies, seen in the visible spectral range as different colors. These effects are commonly used to design and realize new laser light sources.

The analysis of the emerging light beams in wave mixing phenomena provides insights into the nature of the material in which the wave mixing process occurs. Such wave-mixing based spectroscopy allows researchers to understand intricacies of the electronic structure of a specimen and how light can excite and interact with the material. So far, however, these approaches have been hardly used outside of the visible or infrared spectral range.

A team of researchers from Max Born Institute (MBI), Berlin, and DESY, Hamburg, has observed a new kind of such wave mixing process involving soft X-rays. Overlapping ultrashort pulses of soft X-rays and infrared radiation in a single crystal of lithium fluoride (LiF), they saw how energy from two infrared photons was transferred to or from the X-ray photon, changing the X-ray “color” in a so-called third-order nonlinear process.

Not only did they observe this particular process with X-rays for the first time, but they were also able to map out its efficiency when changing the color of the incoming X-rays. It turns out that the mixing signals are only detectable when the process involves an inner-shell electron from a lithium atom being promoted into a state where this electron is tightly bound to the vacancy it left behind—a state known as exciton. Furthermore, comparison with theory shows that an otherwise “optically forbidden” transition of an inner-shell electron contributes to the wave mixing process.

Via analysis of this resonant four-wave mixing process, the researchers got a detailed picture of where the optically excited electron travels in its very short lifetime. “Only if the excited electron is localized in the immediate vicinity of the hole it has left behind do we observe the four-wave mixing signal,” says Robin Engel, a Ph.D. student involved in the work, “and because we have used a specific color of X-rays, we know that this hole is very close to the atomic nucleus of the lithium atom.”

Due to the ability of X-rays to excite inner shell electrons selectively at the different atomic species in a material, the demonstrated approach allows researchers to track electrons moving around in molecules or solids after they have been stimulated by an ultrafast laser pulse. These processes—electrons moving towards different atoms after having been excited by light—are crucial steps in photochemical reactions or applications such as light harvesting, e.g., via photovoltaics or direct solar fuel generation.

“As our wave-mixing spectroscopy approach can be scaled to much higher photon energies at X-ray lasers, many different atoms of the periodic table can be selectively excited. In this way we expect that it will be possible to track the transient presence of electrons at many different atoms of a more complex material, giving new insight into these important processes,” explains Daniel Schick, researcher at MBI.

The research was published in Science Advances.