New insight into the internal structure of the proton 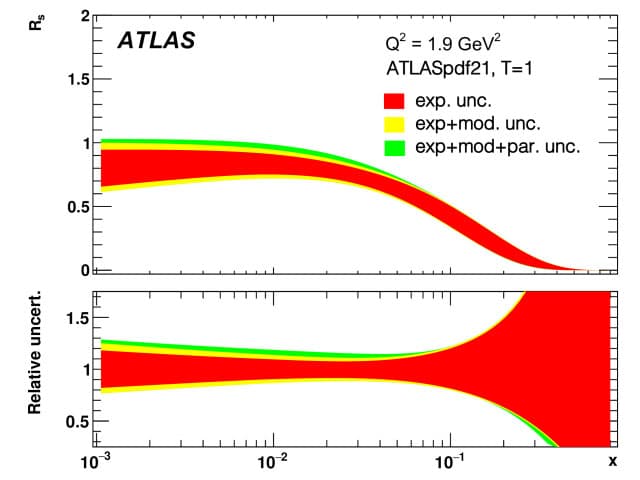 While the Large Hadron Collider (LHC) at CERN is well known for smashing protons together, it is actually the quarks and gluons inside the protons—collectively known as partons—that are really interacting. Thus, in order to predict the rate of a process occurring in the LHC—such as the production of a Higgs boson or a yet-unknown particle—physicists have to understand how partons behave within the proton. This behavior is described in parton distribution functions (PDFs), which describe what fraction of a proton’s momentum is taken by its constituent quarks and gluons.

Knowledge of these PDFs has traditionally come from lepton–proton colliders, such as HERA at DESY. These machines use point-like particles, such as electrons, to directly probe the partons within the proton. Their research revealed that, in addition to the well-known up and down valence quarks that are inside a proton, there is also a sea of quark–antiquark pairs in the proton. This sea is theoretically made of all types of quarks, bound together by gluons. Now, studies of the LHC’s proton–proton collisions are providing a detailed look into PDFs, in particular the proton’s gluon and quark-type composition.

The physicists at CERN’s ATLAS Experiment have just released a new paper combining LHC and HERA data to determine PDFs. The result uses ATLAS data from several different Standard Model processes, including the production of W and Z bosons, pairs of top quarks and hadronic jets (collimated sprays of particles). It was traditionally thought that the strange-quark PDF would be suppressed by a factor of ~2 compared to that of the lighter up- and down-type quarks, because of its larger mass. The new paper confirms a previous ATLAS result, which found that the strange quark is not substantially suppressed at small proton momentum fractions and extends this result to show how suppression kicks in at higher momentum fractions (x > 0.05) as shown in Figure 1.

Several experiments and theoretical groups around the world are working to understand PDFs. While their results are generally in agreement, there has been some variance at the high-momentum fraction (x > 0.1) that could impact high-energy searches for physics beyond the Standard Model. Further, it has become increasingly clear that a better understanding of PDFs at mid-range momentum fractions (x ~ 0.01–0.1) is needed if physicists are to find evidence for new-physics processes in the deviations from the Standard Model of quantities such as the mass of the W boson or the weak mixing angle. This would require knowledge of PDFs to an accuracy of ~1%.

This is where the ATLAS analysis contributes most powerfully, as the accuracy of the PDFs depends on detailed knowledge of the systematic uncertainties of the input data. The ATLAS Collaboration is able to assess the correlations of such uncertainties between their datasets and account for them—an ability put to great effect in their new PDF result. Such knowledge was not previously available outside ATLAS, making this result a new “vademecum” for global PDF groups. It turns out that the impact of such correlations can shift the central values of the PDFs by > 1% in the mid-range momentum region, and by much more than this in the high-x region, as shown in Figure 2.

ATLAS’ new understanding of PDFs will be used in the search for new physics processes when the LHC restarts later this year. Further, the techniques described in the paper will aid future analysis groups—both at ATLAS and beyond—in determining more accurate parton distribution functions.

More information:
Determination of the parton distribution functions of the proton using diverse ATLAS data from proton–proton collisions at 7, 8 and 13 TeV (arXiv: 2112.11266): arxiv.org/abs/arXiv:2112.11266


Citation:
New insight into the internal structure of the proton (2022, January 13)