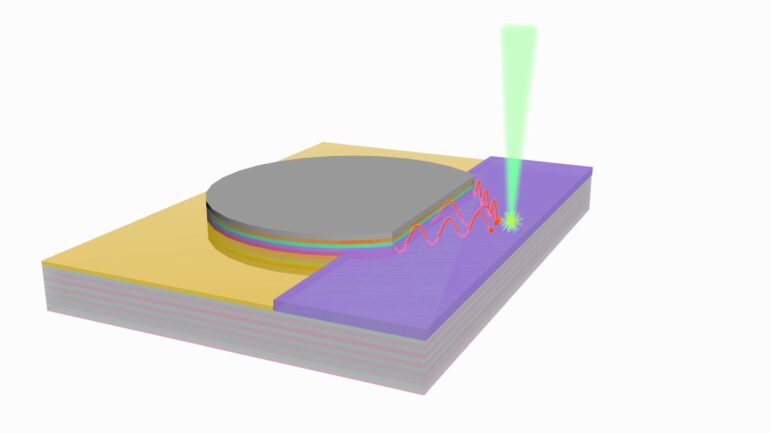 Researchers have developed a new type of high-efficiency photodetector inspired by the photosynthetic complexes plants use to turn sunlight into energy. Photodetectors are used in cameras, optical communication systems and many other applications to turn photons into electrical signals.

“Our devices combine long-range transport of optical energy with long-range conversion to electrical current,” said research team leader Stephen Forrest from the University of Michigan. “This arrangement, analogous to what is seen in plants, has the potential to greatly enhance the power generation efficiency of solar cells, which use devices similar to photodetectors to convert sunlight into energy.”

The photosynthetic complexes found in many plants consist of a large light absorbing region that delivers molecular excited state energy to a reaction center where the energy is converted to a charge. While this setup is very efficient, mimicking it requires achieving long-range energy transport in an organic material, which has proven difficult to accomplish.

To achieve this seemingly impossible task, the researchers used unique quasiparticles known as polaritons. In Optica journal, Forrest and colleagues report their new detector, which generates polaritons in an organic thin film.

“A polariton combines a molecular excited state with a photon, giving it both light-like and matter-like properties that allow long-range energy transport and conversion,” said Forrest. “This photodetector is one of the first demonstrations of a practical optoelectronic device based on polaritons.”

Taking a cue from plants

The researchers envisioned the new detector several years ago while looking for ways to make better solar cells. “After observing polariton propagation over long distances in simple structures such as a mirror with an organic film on its surface, we thought it might be possible to make a photosynthetic analog using polaritons,” said Forrest. “However, it was quite difficult to figure out how to build such a device.”

To create a photodetector based on polaritons, the researchers had to design structures that allow polariton propagation over long distances in an organic semiconductor thin film. They also had to figure out how to integrate a simple organic detector into the propagation region in a way that would produce efficient polariton-to-charge conversion.

“We borrowed from structures that we previously designed to create efficient organic photovoltaic cells,” said Forrest. “It was a bit fortuitous that these structures allowed efficient harvesting of the energy carried by polaritons. Polaritons still hold some mysteries, and this is a new way of using them, so we weren’t sure if it would work.”

The researchers analyzed their new device by using a special Fourier plane microscope to observe polariton propagation. Due to the unusual structure of the detector they had to develop a way to accurately quantify the results and put them in the context of conventional detectors well known to the optics community.

Glass as stable as crystal: Homogeneity leads to stability

The results showed that the new photodetector is more efficient at converting light to electrical current than a comparable silicon photodiode. It can also gather light from areas about 0.01 mm2 and achieve conversion of light to electrical current over exceptionally long distances of 0.1 nm. This distance is three orders larger than the energy transfer distance of photosynthetic complexes.

Until now, most polaritons have been observed as stationary quasiparticles in closed cavities with highly reflective mirrors on both top and bottom. The new work revealed important insights into how polaritons propagate in open structures with a single mirror. The new device also allowed the first measurements of how efficiently incident photons can be converted to polaritons.

“Our work shows that polaritons, in addition to being interesting science, are also a goldmine of applications yet to be discovered,” said Forrest. “Devices such as ours provide an unusual, and possibly unique, method to understand the fundamental properties of polaritons and to enable yet to be imagined ways to manipulate light and charge.”