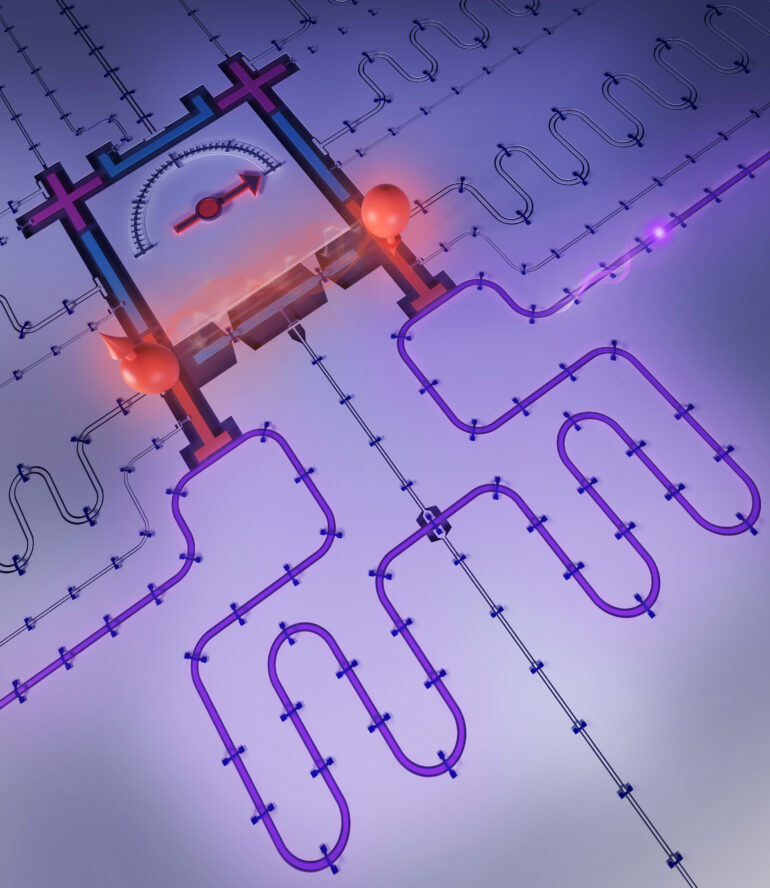 Quantum computers hold the promise of performing certain tasks that are intractable even on the world’s most powerful supercomputers. In the future, scientists anticipate using quantum computing to emulate materials systems, simulate quantum chemistry, and optimize hard tasks, with impacts potentially spanning finance to pharmaceuticals.

However, realizing this promise requires resilient and extensible hardware. One challenge in building a large-scale quantum computer is that researchers must find an effective way to interconnect quantum information nodes—smaller-scale processing nodes separated across a computer chip. Because quantum computers are fundamentally different from classical computers, conventional techniques used to communicate electronic information do not directly translate to quantum devices. However, one requirement is certain: Whether via a classical or a quantum interconnect, the carried information must be transmitted and received.

To this end, MIT researchers have developed a quantum computing architecture that will enable extensible, high-fidelity communication between superconducting quantum processors. In work published in Nature Physics, MIT researchers demonstrate step one, the deterministic emission of single photons—information carriers—in a user-specified direction. Their method ensures quantum information flows in the correct direction more than 96 percent of the time.

Linking several of these modules enables a larger network of quantum processors that are interconnected with one another, no matter their physical separation on a computer chip.

“The ability to communicate between smaller subsystems will enable a modular architecture for quantum processors, and this may be a simpler way of scaling to larger system sizes compared to the brute-force approach of using a single large and complicated chip,” Kannan adds.

Kannan wrote the paper with co-lead author Aziza Almanakly, an electrical engineering and computer science graduate student in the Engineering Quantum Systems group of the Research Laboratory of Electronics (RLE) at MIT. The senior author is William D. Oliver, a professor of electrical engineering and computer science and of physics, an MIT Lincoln Laboratory Fellow, director of the Center for Quantum Engineering, and associate director of RLE.

In a conventional classical computer, various components perform different functions, such as memory, computation, etc. Electronic information, encoded and stored as bits (which take the value of 1s or 0s), is shuttled between these components using interconnects, which are wires that move electrons around on a computer processor.

A quantum network links processing nodes using photons that travel through special interconnects known as waveguides. A waveguide can either be unidirectional, and move a photon only to the left or to the right, or it can be bidirectional.

Most existing architectures use unidirectional waveguides, which are easier to implement since the direction in which photons travel is easily established. But since each waveguide only moves photons in one direction, more waveguides become necessary as the quantum network expands, which makes this approach difficult to scale. In addition, unidirectional waveguides usually incorporate additional components to enforce the directionality, which introduces communication errors.

“We can get rid of these lossy components if we have a waveguide that can support propagation in both the left and right directions, and a means to choose the direction at will. This ‘directional transmission’ is what we demonstrated, and it is the first step toward bidirectional communication with much higher fidelities,” says Kannan.

Using their architecture, multiple processing modules can be strung along one waveguide. A remarkable feature the architecture design is that the same module can be used as both a transmitter and a receiver, he says. And photons can be sent and captured by any two modules along a common waveguide.

“We have just one physical connection that can have any number of modules along the way. This is what makes it scalable. Having demonstrated directional photon emission from one module, we are now working on capturing that photon downstream at a second module,” Almanakly adds.

To accomplish this, the researchers built a module comprising four qubits.

Qubits are the building blocks of quantum computers, and are used to store and process quantum information. But qubits can also be used as photon emitters. Adding energy to a qubit causes the qubit to become excited, and then when it de-excites, the qubit will emit the energy in the form of a photon.

However, simply connecting one qubit to a waveguide does not ensure directionality. A single qubit emits a photon, but whether it travels to the left or to the right is completely random. To circumvent this problem, the researchers utilize two qubits and a property known as quantum interference to ensure the emitted photon travels in the correct direction.

The technique involves preparing the two qubits in an entangled state of single excitation called a Bell state. This quantum-mechanical state comprises two aspects: the left qubit being excited and the right qubit being excited. Both aspects exist simultaneously, but which qubit is excited at a given time is unknown.

When the qubits are in this entangled Bell state, the photon is effectively emitted to the waveguide at the two qubit locations simultaneously, and these two “emission paths” interfere with each other. Depending on the relative phase within the Bell state, the resulting photon emission must travel to the left or to the right. By preparing the Bell state with the correct phase, the researchers choose the direction in which the photon travels through the waveguide.

They can use this same technique, but in reverse, to receive the photon at another module.

“The photon has a certain frequency, a certain energy, and you can prepare a module to receive it by tuning it to the same frequency. If they are not at the same frequency, then the photon will just pass by. It’s analogous to tuning a radio to a particular station. If we choose the right radio frequency, we’ll pick up the music transmitted at that frequency,” Almanakly says.

The researchers found that their technique achieved more than 96 percent fidelity—this means that if they intended to emit a photon to the right, 96 percent of the time it went to the right.

Now that they have used this technique to effectively emit photons in a specific direction, the researchers want to connect multiple modules and use the process to emit and absorb photons. This would be a major step toward the development of a modular architecture that combines many smaller-scale processors into one larger-scale, and more powerful, quantum processor.