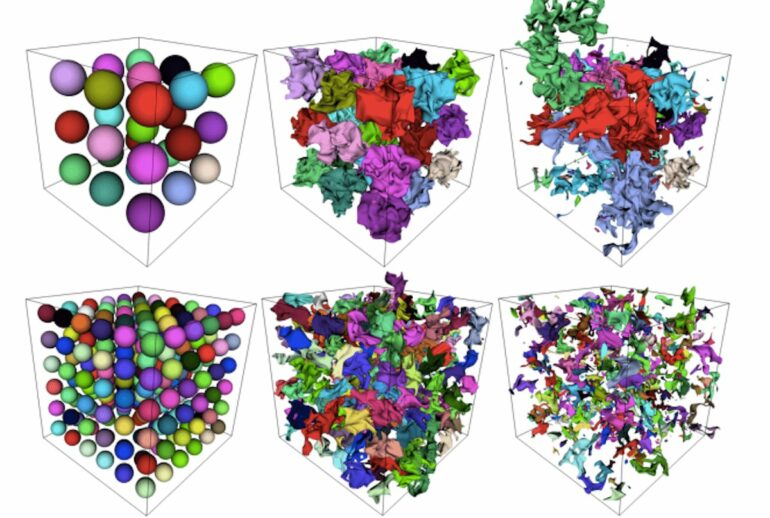 Have you ever experimented with food dye? It can make cooking a lot more fun, and provides a great example of how two fluids can mix together well—or not much at all.

Add a small droplet in water and you might see it slowly dissolve in the larger liquid. Add a few more drops and perhaps you’ll see a wave of color spread, the colored droplets spreading and breaking apart to diffuse more thoroughly. Add a spoon and begin stirring quickly, and you’ll probably find that the water fully changes color, as desired.

Researchers at the USC Viterbi School of Engineering, led by Ivan Bermejo-Moreno, assistant professor of aerospace and mechanical engineering, studied a similar phenomenon with gases at high speeds, with an eye toward more efficient mixing to support supersonic scramjet engines. In the study, published in Physics of Fluids, USC Viterbi Ph.D. Jonas Buchmeier, along with Xiangyu Gao (USC Viterbi Ph.D. ’20) and former visiting M.Sc. student Alexander Bußmann (Technical University Munich), developed a novel tracking method that zoomed in on the fundamentals of how mixing happens. The study helps understand, for example, how injected fuel interacts with the surrounding oxidizers (air) in the engine to make it operate optimally, or how interstellar gases mix after a supernova explosion to form new stars. The method focuses on the geometric and physical properties of the turbulent swirling motions of gases and how they change shape over time as they mix.

Scramjet engines—super-fast, experimental engines with no moving parts—have previously set the air speed record for jet aircraft at Mach 9.6, allowing potential travel from Sydney to London in around 90 minutes.

“The dynamics of these individual flow structures and the geometric changes they are undergoing have not been tracked over time,” Bermejo-Moreno said, “because we didn’t previously have the computational techniques to do so; particularly in a turbulent, propulsion system (like in a jet engine). Now we can look at thousands or hundreds of thousands of these flow structures simultaneously and track for each how the shape of the structure changes and how it mixes and interacts with the surrounding structures.”

The value, Bermejo-Moreno said, is that once you can identify patterns that are most helpful to accelerating the mixing process, you can replicate these specific conditions, since you can see the evolution of the structures (of the fuel and oxidizer, for example) at every point in time.

“In a supersonic combustion engine, you want fuel mixing to occur as quickly as possible so that the fuel will be completely used before exiting the engine,” he said. “To do this, we need to understand how mixing occurs at different points in time.”

When fuel is injected into a rocket or scramjet engine, it begins a diffusion process, Bermejo-Moreno said.

“The injection process is going to typically break the fuel up into small, nearly spherical structures, which are then transported and mixed by the turbulent airflow inside the engine. The turbulence will continue breaking up the fuel structures and changing their shapes.”

The figure above demonstrates an “ideal” case, where the fuel is far away from the engine walls, and essentially there are no boundaries. But in a real-life scenario, the engine walls will also impact mixing. The new study focuses on isolating the effects of shockwaves as a key component in compressing the fuel—constricting its volume—and breaking it up, Bermejo-Moreno said. A shockwave is a disturbance that moves faster than the speed of sound, and makes an abrupt, discontinuous change in pressure, temperature and density of the medium its impacting. In this case, a shockwave flattens the shape of the fuel structures and creates more surface area for the fuel to be broken up by the turbulence inside the engine.

Understanding the effects of compression—via a shockwave, for example—on turbulent mixing processes is very important to advancing air-breathing super and hypersonic propulsion systems.

These systems are characterized by an inflow of air forced into the engine, heated and released through an exhaust. Such systems also have compressed time requirements for mixing to occur. Knowing exactly how injected fuel is broken down can help researchers identify exactly which conditions promote the most beneficial mixing scenario for such engines to efficiently operate.

Prior research led by Bermejo-Moreno identified shockwaves as a beneficial force in accelerating fuel mixing, but that research did not benefit from the tracking methodology algorithm put into place in the new study. While several events could be tracked manually, trying to find an accurate representation and recommendation of how fuel will mix in different conditions relies on having a large enough sample size showing a similar result.

This new tracking methodology offers a clearer picture of the structural shift of the injected fuel from moment to moment, better informing aerospace engineers how to replicate conditions that will most benefit supersonic and hypersonic engines.

“Once you have this tracking algorithm, you can apply it to any flow to obtain a graph that encapsulates the interactions of all the structures found in the flow over time,” Bermejo-Moreno said. “You can interrogate the graph and look for patterns that evolve similarly over time. You can see how often these patterns repeat and collect statistics of the physical processes involved to say, for instance, “This is a common behavior in the breakup process of the injected fuel.'”

“If you think about larger structures,” he said, “You think they will take longer to diffuse, but the turbulent mixing they experience will benefit more from shock interactions, which will break them more quickly into smaller structures.”

If you think about the case of the food dye again, the more small drops of food dye there are, the easier it is for the dye to dissolve in water and combine with it to make a new solution.

“If you can have better mixing, that’s going to help improve the performance of your propulsion systems,” Bermejo-Moreno said.

Bermejo-Moreno said next steps include investigating what happens when you get closer to the engine walls and in mixing layers—two streams of fluid moving at two different speeds. “We will track structures of turbulence over time to understand how viscous shear affects the mixing processes from the standpoint of the structural dynamics,” he said.

For now, Bermejo-Moreno said there are additional factors that will ultimately impact propulsion performance that will be taken into account before providing real world recommendations, but this is one step forward.