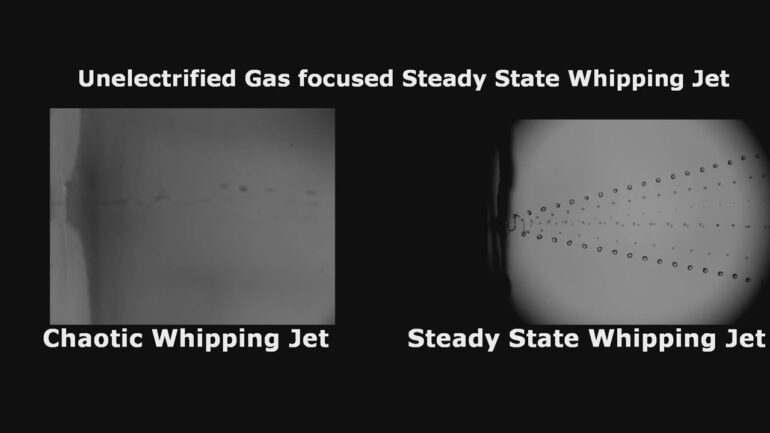 Aerosols are tiny particles that can have a significant impact on Earth’s climate and human health.

For example, these microdroplets can reflect incoming sunlight back to outer space, helping to cool a warming planet. Or they can be used to administer drugs to the lungs, especially to treat respiratory ailments.

Thus, the ability to more precisely control how aerosols move is critically important to pharmaceutical sciences and climate research. Aerosol science is also a key aspect of many industries, everything from automobiles to food processing.

“We have created a unique, steady-state, gas-focused whipping jet that does not use electricity,” says the lead author Sankar Raju Narayanasamy, Ph.D., a researcher at Lawrence Livermore National Laboratory, and an affiliate researcher at Berkeley Lab and SLAC National Accelerator Laboratory.

“This development is a significant feat that can have a wide range of applications,” says Narayanasamy, who conducted the research as BioXFEL scholar, a research consortium led by University at Buffalo, Hauptman-Woodward Medical Research Institute (HWI) and partner institutions.

Martin Trebbin, Ph.D., SUNY Empire Innovation assistant professor of chemistry at the University at Buffalo College of Arts and Sciences, is a co-corresponding author of the study. He says that “fine monodisperse aerosols with controlled sizes are useful in sample environment instrumentation, such as in mass spectrometry, X-ray free-electron lasers (XFELs), and cryo-electron microscopy, which are used to study bio-macromolecules for structural analysis and drug discovery.”

Trebbin, who says that the research is an “important achievement in fluid dynamics and microfluidics,” is a core faculty member of the UB RENEW Institute, and he holds an appointment at the BioXFEL Science and Technology Center.

In the past 20 years, scientists have tried many ways, such as piezoelectric actuation or local heating, to precisely control the movement of aerosols. Use of those techniques, however, is limited because they tend to alter the specimens that scientists are using the aerosols to study. This is especially true with biological samples.

In the study, researchers discuss the important role that analytical fluid dynamics—a branch of fluid mechanics that uses numerical analysis and data structures to analyze and solve problems involving fluid flows—played in their work.

This includes explaining the “jet diameter, whipping regime and spreading angle” of the devices, says Ramakrishna Vasireddi, Ph.D., co-first author and a research scientist at SOLEIL, the French synchrotron facility in Paris. He adds, “The phenomenon is further characterized experimentally by measuring the angle with respect to the flow rate, the distances between droplets, the droplet shapes, and the reproducibility of these parameters.”

In the study, the team also explains how to build such devices, which are relatively inexpensive.