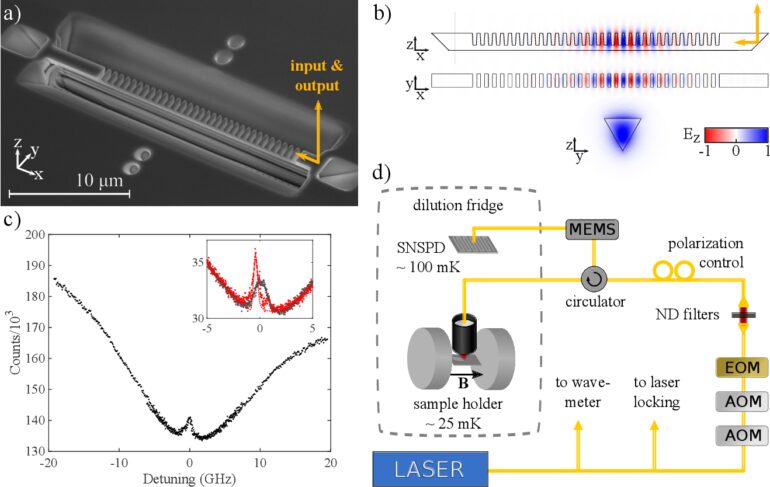 In a recent study published in Physical Review Letters, a research team led by Prof. Guo Guangcan from the University of Science and Technology of China (USTC) of the Chinese Academy of Sciences (CAS) achieved on-demand storage of photonic qubits at telecom wavelengths using a laser-written waveguide fabricated in an erbium-doped crystal.

In this study, researchers processed a fiber-integrated quantum memory at telecom wavelengths based on a laser-written waveguide fabricated in an erbium-doped yttrium silicate (167Er3+:Y2SiO5) crystal.

In order to realize on-demand storage and retrieval, the researchers glued and integrated ordinary single-mode fibers at both ends of the waveguide. They used electronic evaporation technology to fabricate on-chip electrodes on both sides of the waveguide. To further increase storage efficiency, they polarized the electron spin of the erbium ion and initialized its nuclear spin state.

Such methods resulted in a fivefold increase (up to 10.9%) in the photon storage efficiency, compared with previously reported results. Additionally, the fidelity of on-demand quantum storage reached 98.3%, reducing the loss in long-distance optical fiber transmission by a significant extent.

This work demonstrates an essential requirement for fiber-based quantum networking applications, and is a leap forward in the construction of large-scale quantum networks based on existing fiber networks.