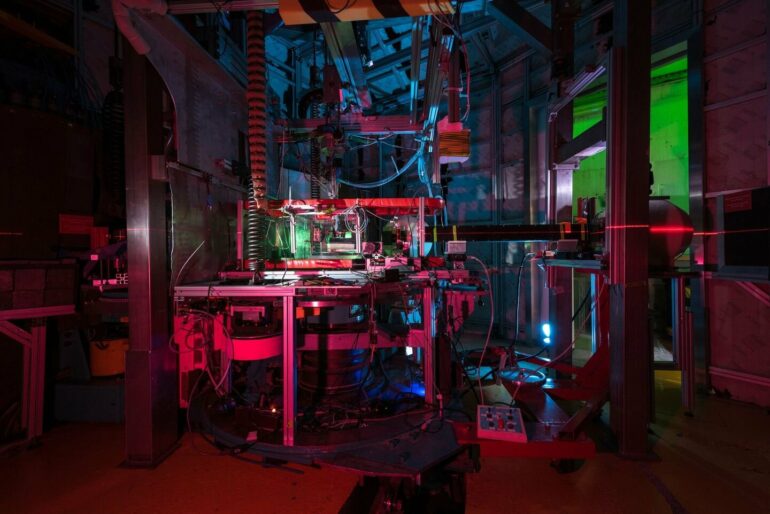 The double-slit experiment is the most famous and probably the most important experiment in quantum physics: individual particles are shot at a wall with two openings, behind which a detector measures where the particles arrive. This shows that the particles do not move along a very specific path, as is known from classical objects, but along several paths simultaneously: Each individual particle passes through both the left and the right opening.

Normally, however, this can only be proven by carrying out the experiment repeatedly and evaluating the results of many particle detections at the end. At TU Wien, researchers developed a new variant of such a two-way interference experiment that can correct this flaw: A single neutron is measured at a specific position—and due to the sophisticated measurement setup, this single measurement proofs already that the particle moved along two different paths at the same time. It is even possible to determine the ratio in which the neutron was distributed between the two paths. Thus, the phenomenon of quantum superposition can be proven without having to resort to statistical arguments. The results have now been published in the journal Physical Review Research.

“In the classical double-slit experiment, an interference pattern is created behind the double slit,” explains Stephan Sponar from the Atomic Institute at TU Wien. “The particles move as a wave through both openings at the same time, and the two partial waves then interfere with each other. In some places they reinforce each other, in other places they cancel each other out.”

The probability of measuring the particle behind the double slit at a very specific location depends on this interference pattern: where the quantum wave is amplified, the probability of measuring the particle is high. Where the quantum wave is canceled out, the probability is low. Of course, this wave distribution cannot be seen by looking at a single particle. Only when the experiment is repeated many times does the wave pattern become increasingly recognizable point by point and particle by particle.

“So, the behavior of individual particles is explained based on results that only become visible through the statistical investigation of many particles,” says Holger Hofmann from Hiroshima University, who developed the theory behind the experiment. “Of course, this is not entirely satisfactory. We have therefore considered how the phenomenon of two-way interference can be proven based on the detection of a single particle.”

This was made possible with the help of neutrons at the neutron source of ILL in Grenoble: The neutrons are sent onto a crystal that splits the quantum wave of the neutron into two partial waves, very similar to the classical double-slit experiment. The two partial neutron waves move along two different paths and are recombined again. They interfere and are then measured.

“We therefore rotate the spin of the neutron just a little,” explains Hartmut Lemmel, the first author of the current publication. “Then the interference pattern remains, because you can only obtain very little information about the path. In order to still obtain precise path information, this ‘weak’ measurement is repeated many times in conventional experiments. However, one then obtains only a statistical statement about the whole ensemble of neutrons and can say little about each individual neutron.”

The situation is different if, after the two neutron partial waves have merged, another magnetic field is used to turn the spin back again. By trial and error, one determines the angle of rotation that is necessary to turn the spin of the superimposed state back into the original direction. The strength of this rotation is a measure of how strongly the neutron was present in each path. If it had taken only the path on which the spin has been rotated, the full angle of rotation would be necessary to rotate it back. If it had taken only the other path, no reverse rotation would be necessary at all. In the experiment carried out using a special asymmetric beam splitter, it was shown that the neutrons were present to one third in one path and to two thirds in the other.

Through detailed calculations, the team was able to show: Here, one does not merely detect an average value over the totality of all measured neutrons, but the statement applies to each individual neutron. It takes many neutrons to determine the optimal angle of rotation, but as soon as this is set, the path presence determined from it applies to every single neutron detected.

“Our measurement results support classical quantum theory,” says Stephan Sponar. “The novelty is that one does not have to resort to unsatisfactory statistical arguments: When measuring a single particle, our experiment shows that it must have taken two paths at the same time and quantifies the respective proportions unambiguously.” This rules out alternative interpretations of quantum mechanics that attempt to explain the double-slit experiment with localized particles.

More information:
Hartmut Lemmel et al, Quantifying the presence of a neutron in the paths of an interferometer, Physical Review Research (2022). DOI: 10.1103/PhysRevResearch.4.023075