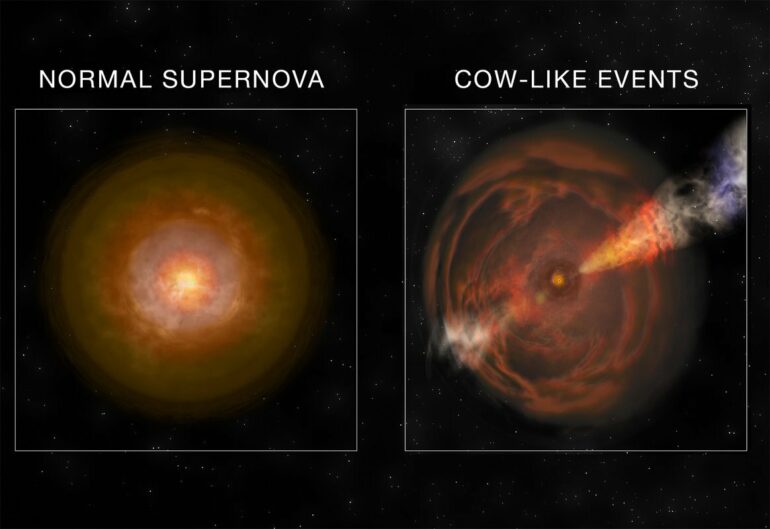 A quadruple star system discovered in 2017 and recently observed at the University of Canterbury Mt. John Observatory could represent a new channel by which thermonuclear supernova explosions can occur in the universe, according to results published in Nature Astronomy today (13 May) by an international team of astronomers.

The rare double-binary star system HD74438 was discovered in the Vela constellation in 2017 using the Gaia-ESO Survey that characterized more than 100,000 stars in our Milky Way Galaxy.

Follow-up observations of HD 74438 were obtained over several years to precisely track the orbits of the stars in the quadruple star system. Observations were taken with high-resolution spectrographs at the University of Canterbury Mt. John Observatory in New Zealand, and the Southern African Large Telescope in South Africa.

The quadruple system is a member of the young open star cluster IC 2391, making it the youngest (only 43-million years old) spectroscopic quadruple discovered in the Milky Way Galaxy to date, and among the quadruple systems with the shortest outer orbital period (six years).

In the Nature Astronomy paper published today, the authors have shown that the gravitational effects of the outer binary system is changing the orbits of the inner binary, causing it to become more eccentric. State-of-the art simulations of this system’s future evolution show that such gravitational dynamics can lead to one or multiple collisions and merger events producing evolved dead stars (white dwarfs) with masses just below the Chandrasekhar limit. As a result of mass transfer or mergers, these white dwarf stars can produce a thermonuclear supernova explosion.

Associate Professor Pollard says high-precision and high-resolution spectroscopic observations were taken with the Hercules spectrograph on the 1.0m McLellan Telescope at the University of Canterbury Mt. John Observatory in Tekapo.

The evolution of stellar quadruples such as HD 74438 thus represents a new promising channel to form thermonuclear supernova explosions in the Universe, Associate Professor Pollard says.

Binary stars are now recognized as playing a major role in a large range of astrophysical events, and mergers of binaries are the cause of the recent gravitational wave emission detection. Binary stars also allow us to derive fundamental stellar parameters like masses, radii and luminosities with a better accuracy compared to single stars. They represent the gems on which various astrophysics topics rely.

Stellar quadruples only represent a marginal fraction (a few percent) of all multiple systems. The complex evolution of such high-order multiples involves mass transfer and collisions, leading to mergers that are also possible progenitors of thermonuclear supernovae. These supernovae represent standard candles for fixing the Universe distance scale, even though the evolutionary channel(s) leading to the progenitors of such supernova explosions are still highly debated.

The paper, “A spectroscopic quadruple as a possible progenitor of sub-Chandrasekhar type Ia supernovae,” has been published in Nature Astronomy.