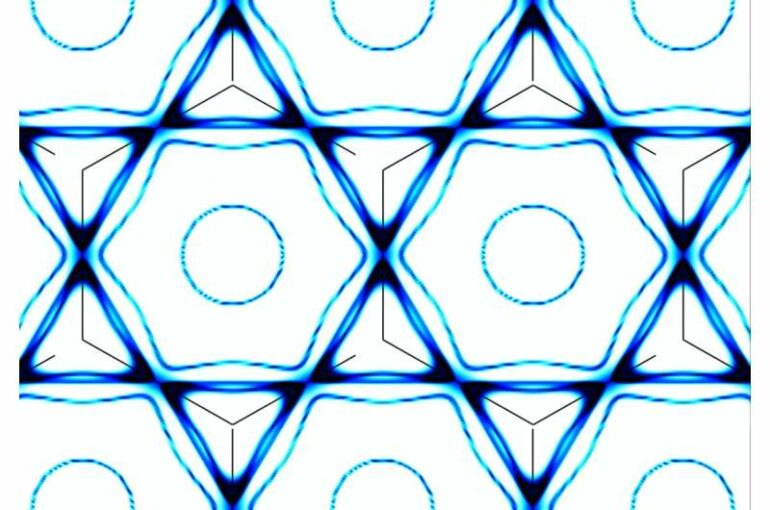 MIT physicists and colleagues have discovered the “secret sauce” behind some of the exotic properties of a new quantum material that has transfixed physicists due to those properties, which include superconductivity. Although theorists had predicted the reason for the unusual properties of the material, known as a kagome metal, this is the first time that the phenomenon behind those properties has been observed in the laboratory.

“The hope is that our new understanding of the electronic structure of a kagome metal will help us build a rich platform for discovering other quantum materials,” says Riccardo Comin, the Class of 1947 Career Development Assistant Professor of Physics at MIT, whose group led the study. That, in turn, could lead to a new class of superconductors, new approaches to quantum computing, and other quantum technologies.

The work is reported in the January 13, 2022 online issue of the journal Nature Physics.

Classical physics can be used to explain any number of phenomena that underlie our world—until things get exquisitely small. Sub-atomic particles like electrons and quarks behave differently, in ways that are still not fully understood. Enter quantum mechanics, the field that tries to explain their behavior and resulting effects.

The kagome metal at the heart of the current work is a new quantum material, or one that manifests the exotic properties of quantum mechanics at a macroscopic scale. In 2018 Comin and Joseph Checkelsky, MIT’s Mitsui Career Development Associate Professor of Physics, led the first study on the electronic structure of kagome metals, spurring interest into this family of materials. Members of the kagome metal family are composed of layers of atoms arranged in repeating units similar to a Star of David or sheriff’s badge. The pattern is also common in Japanese culture, particularly as a basketweaving motif.

“This new family of materials has attracted a lot of attention as a rich new playground for quantum matter that can exhibit exotic properties such as unconventional superconductivity, nematicity, and charge-density waves,” says Comin.

Superconductivity and hints of charge density wave order in the new family of kagome metals studied by Comin and colleagues were discovered in the laboratory of Professor Stephen Wilson at the University of California, Santa Barbara, where single crystals were also synthesized (Wilson is a coauthor of the Nature Physics paper). The specific kagome material explored in the current work is made of only three elements (cesium, vanadium, and antimony) and has the chemical formula CsV3Sb5.

The researchers focused on two of the exotic properties that a kagome metal shows when cooled below room temperatures. At those temperatures, electrons in the material begin to exhibit collective behavior. “They talk to each other, as opposed to moving independently,” says Comin.

One of the resulting properties is superconductivity, which allows a material to conduct electricity extremely efficiently. In a regular metal, electrons behave much like people dancing individually in a room. In a kagome superconductor, when the material is cooled to 3 Kelvin (~-454 Fahrenheit) the electrons begin to move in pairs, like couples at a dance. “And all these pairs are moving in unison, as if they were part of a quantum choreography,” says Comin.

At 100 Kelvin, the kagome material studied by Comin and collaborators exhibits yet another strange kind of behavior known as charge density waves. In this case, the electrons arrange themselves in the shape of ripples, much like those in a sand dune. “They’re not going anywhere; they’re stuck in place,” Comin says. A peak in the ripple represents a region that is rich in electrons. A valley is electron-poor. “Charge density waves are very different from a superconductor, but they’re still a state of matter where the electrons have to arrange in a collective, highly organized fashion. They form, again, a choreography, but they’re not dancing anymore. Now they form a static pattern.”

Comin notes that kagome metals are of great interest to physicists in part because they can exhibit both superconductivity and charge density waves. “These two exotic phenomena are often in competition with one another, therefore it is unusual for a material to host both of them.”

But what is behind the emergence of these two properties? “What causes the electrons to start talking to each other, to start influencing each other? That is the key question,” says first author Mingu Kang, a graduate student in the MIT Department of Physics also affiliated with the Max Planck POSTECH Korea Research Initiative. That’s what the physicists report in Nature Physics. “By exploring the electronic structure of this new material, we discovered that the electrons exhibit an intriguing behavior known as an electronic singularity,” Kang says. This particular singularity is named for Léon van Hove, the Belgian physicist who first discovered it.

The van Hove singularity involves the relationship between the electrons’ energy and velocity. Normally, the energy of a particle in motion is proportional to its velocity squared. “It’s a fundamental pillar of classical physics that [essentially] means the greater the velocity, the greater the energy,” says Comin. Imagine a Red Sox pitcher hitting you with a fast ball. Then imagine a kid trying to do the same. The pitcher’s ball would hurt a lot more than the kid’s, which has less energy.

What the Comin team found is that in a kagome metal, this rule doesn’t hold anymore. Instead, electrons traveling with different velocities happen to all have the same energy. The result is that the pitcher’s fast ball would have the same physical effect as the kid’s. “It’s very counterintuitive,” Comin says. He noted that relating the energy to the velocity of electrons in a solid is challenging and requires special instruments at two international synchrotron research facilities: Beamline 4A1 of the Pohang Light Source and Beamline 7.0.2 (MAESTRO) of the Advanced Light Source at Lawrence Berkeley National Lab.

Comments Professor Ronny Thomale of the Universität Würzburg (Germany): “Theoretical physicists (including my group) have predicted the peculiar nature of van Hove singularities on the kagome lattice, a crystal structure made of corner-sharing triangles. Riccardo Comin has now provided the first experimental verification of these theoretical suggestions.” Thomale was not involved in the work.

When many electrons exist at once with the same energy in a material, they are known to interact much more strongly. As a result of these interactions, the electrons can pair up and become superconducting, or otherwise form charge density waves. “The presence of a van Hove singularity in a material that has both makes perfect sense as the common source for these exotic phenomena” adds Kang. “Therefore, the presence of this singularity is the ‘secret sauce’ that enables the quantum behavior of kagome metals.”

The team’s new understanding of the relationship between energy and velocities in the kagome material “is also important because it will enable us to establish new design principles for the development of new quantum materials,” Comin says. Further, “we now know how to find this singularity in other systems.”

When physicists are analyzing data, most of the time that data must be processed before a clear trend is seen. The kagome system, however, “gave us direct feedback on what’s happening,” says Comin. “The best part of this study was being able to see the singularity right there in the raw data.”