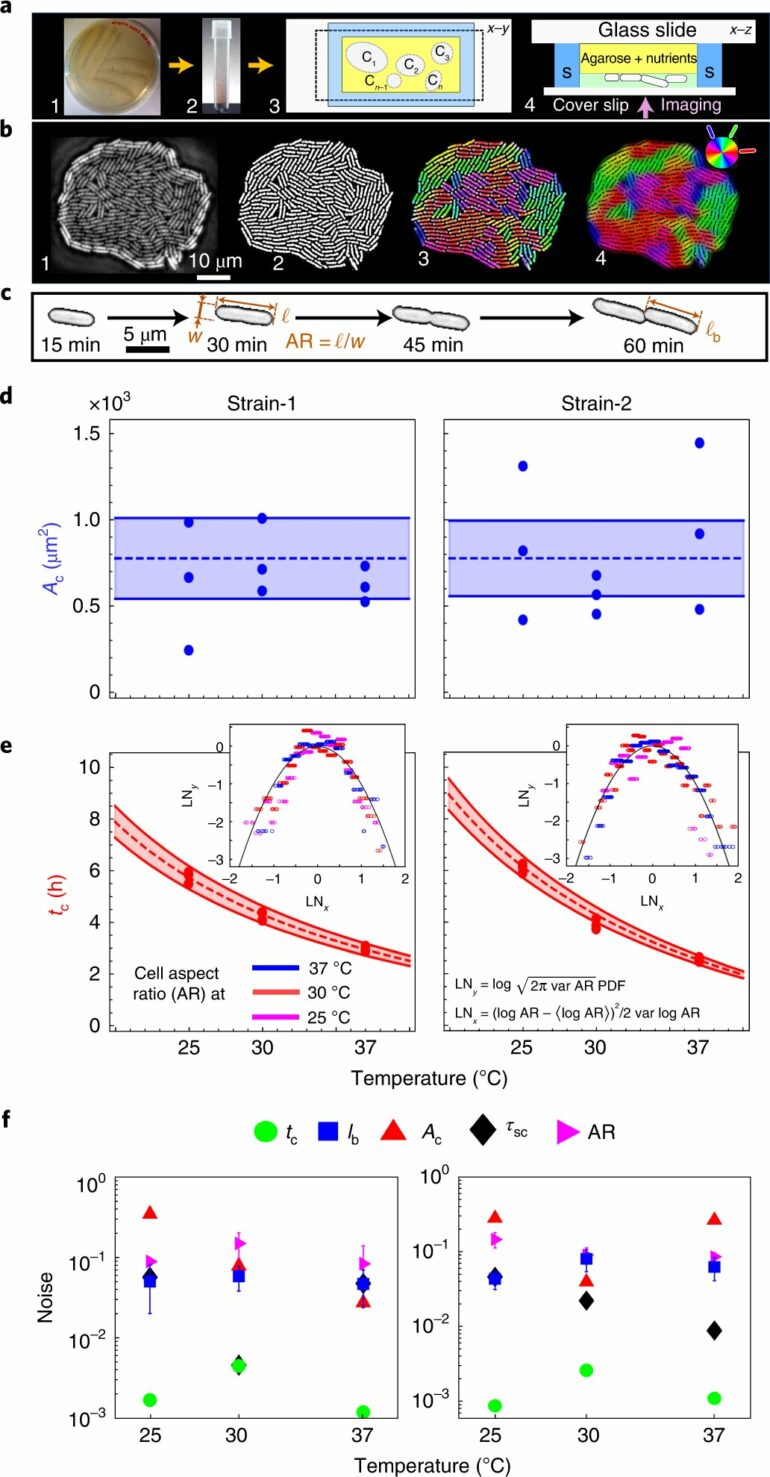 Bacteria collaborate and coordinate collectively as they form a shared structure called a biofilm, such as the dental plaque on our teeth or the microbiome associated with our gut. This self-organization in multiple complex layers—despite variations of cellular properties at individual level—requires that the living systems share common, yet precise time, which has now been uncovered by physicists from the University of Luxembourg.

Prof. Anupam Sengupta and his team explained this by zooming into the growth and development of nascent bacterial biofilms, wherein they discover emergent cross-talks between biophysical properties which enable precise timing of structural, topological and hydrodynamic transitions at the population scales. The groundbreaking findings appear in the recent edition of the journal Nature Physics.

Bacterial biofilms are found on nearly every natural and artificial surface we come across. They are crucial for human existence: from those in the gut regulating our physical well-being, to the ones regulating the progression of cancers and holding our ecosystem in balance. Thanks to the exquisite physico-chemical feedback mechanisms mediating their prolific surface-associated lifestyles, biofilms are highly resilient and can colonize diverse systems.

Now, researchers from the Physics of Living Matter Group at the University of Luxembourg solve this long-standing conundrum: how biofilms—and living systems in general—regulate the timing of key developmental events emerging from individuals with highly variable and dynamic attributes. Taking a quantitative cross-disciplinary approach to spy within nascent bacterial biofilms, Prof. Sengupta’s team provides the mechanistic underpinnings of how well-timed developmental steps emerge collectively due to the self-regulation of cell-level traits, which cross-talks to mitigate each other’s noisy effects, ultimately enabling a precise timing of key developmental events.

The work dives deeper into rationalizing the results, providing a physiologically consistent picture based on the metabolic requirements during the early stages of biofilm development. The results demonstrate how self-regulation of phenotypic noise drive well-timed transitions in the structure, topology and active flows in bacterial colonies, highlighting the strategic role of physics in understanding biological systems. The work fits broadly into the Physics Meets Biology initiative within the University of Luxembourg.

Despite the variability in phenotypic traits, such as cell geometry, growth rates, and surface association, bacterial biofilms undergo critical developmental steps in their lifecycle at precise time points, starting with the mono-to-multilayer transition (MTMT). Following this key structural transition, an emergent cascade is set off, synchronously timing the changes in topology and active flow fields within and in the vicinity of the nascent biofilms.

The catalog key phenotypic traits in Escherichia coli and Serratia marcescens growing under diverse conditions (nutrient levels and temperatures), allowing for careful control of the biological activity, and quantify how the cross-talks between phenotypic noises determine the timeliness of structural organization and emergence of active local transport. This work thus forges the first direct, mechanistic link between activity-dependent cell-level variability and population-scale emergent properties in living systems.

Leveraging a cross-scale and cross-disciplinary approach

Using a combination of single-cell time-lapse imaging, particle image velocimetry, numerical simulations and continuum modeling, the team quantifies cell-level variability in terms of phenotypic noise, and uncover trade-offs that ultimately suppress variability in emergent properties and render them synchronous. Specifically, a trade-off between the noise in the cell geometry and the growth rate self-regulate the timing of the mono-to-multilayer-transition (MTMT), a key step in biofilm initiation, setting off a synchronous active hydrodynamic cascade that ultimately drives enhanced local transport around the confluent bacterial colonies.

Remarkably, despite the species being non-motile in nature, the growth-dependent active hydrodynamics within confluent colonies trigger local flows in their surroundings which are strong enough to disrupt self-assembled particle clusters (used as tracers, see Figure 1) and transport them actively across the microbial environment. The enhancement in transport—in an otherwise diffusion-limited setting—by more than two orders of magnitude suggest biological functions of such active flows in the transport of molecular and micro-cargo during the early stages of biofilm development.

This work presents a breakthrough in the domain of physics of microbial active matter, and provides a new paradigm to understand how confluent bacterial populations may cope with environmental variations, including those imposed by lifestyle and climate changes, by leveraging their individual-scale variability.

Perspectives on the synchronous active transport in nascent biofilms

The team demonstrates that sessile colonies can generate and harness active flows for shuttling sub-micron to micron sized biological cargo which are widely found associated with bacterial colonies. Taken together the associated micro-cargo span dimensions ranging from tens of nanometers to a few microns. Typical micro-cargo include bacterial cells (different carrier and cargo species of micron size), fungal spores in micron scale; liposomes and extracellular vesicles delivering genetic or biochemical cargo (tens to hundreds of nanometers in size), hitchhiking bacteriophages (hundreds of nanometers), and synthetic beads and capsules relevant for drug delivery (sub-microns to tens of microns in size).

The biological significance of the time-synchronous nexus between structure-flow-transport is multi-pronged: Strict timing of the extrusion events presents MTMT as a biophysical proxy to quorum-like sensing between the colonies, with potential ramifications of and in synchronous selection for resistant cells (for instance, against antibiotics). Disrupting the well-defined MTMT timing (for instance, by appropriately tuning environmental factors) could offer future alternatives to inhibit quorum-sensing, and thereby regulate bacterial resistance to antibiotics.

Looking ahead, it will be critical to understand how sessile colonies harness the well-defined critical time to tune inter-colony communications under stressful environments (in the parameter space of intrinsic noise and structure-flow time-synchronicity). The noise-mediated spatio-temporal phenomena presented in this work provides key missing insights into the developmental biophysics of morphogenesis in systems with higher complexity, including polymicrobial consortia observed in the human and plant microbiomes, and multi-cellular tissue systems relevant for embryonic and cancer progression.

This work opens new research paths in the fields of physics of microbial active matter, soft and biological physics, and cell biology, and—owing to the important role of bacterial biofilms in human microbiome and environmental ecology—also biomedical and biotechnological sciences. The structural and multifield topological outcomes presented here through Prof. Sengupta’s vision will be consequential for diverse confluent systems spanning active tissue and cell systems, and a wide-range of organoid models.

Finally, this work provides a new experimental model system for active matter research where passive entities co-exist with active agents, and inspire a new class of theoretical models that incorporate cellular variability and trade-offs therein to understand the impact of noise, an intrinsic biophysical variable, on emergent properties in living systems.

Provided by
University of Luxembourg