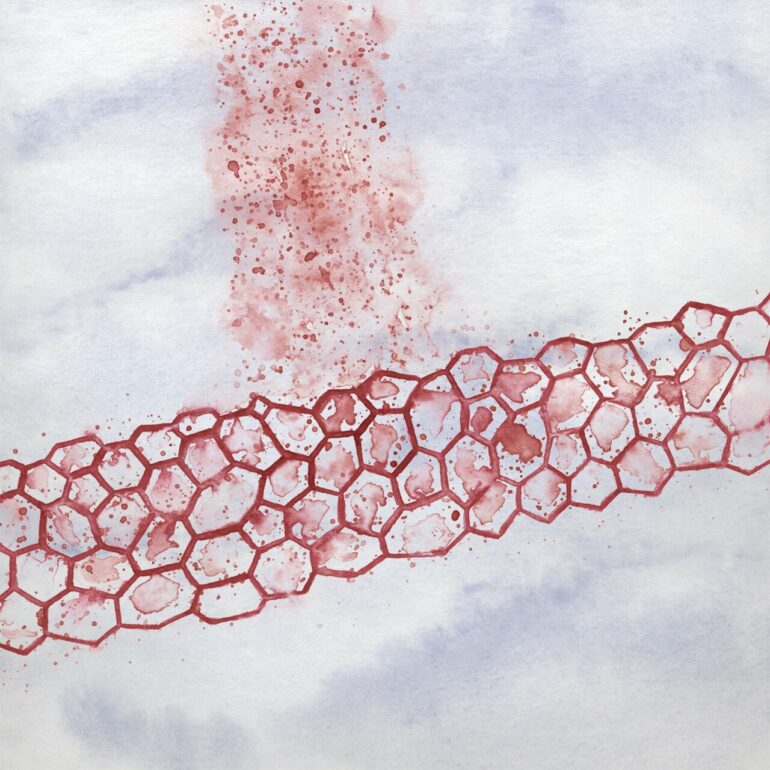 Silicon solar cells have proven to be a top photovoltaic technology, as they use earth abundant raw materials (i.e. Si) and perform with high efficiency. However, they are based on thick, rigid and heavy wafers and can therefore only be installed in a limited number of places. One of the ways to overcome this disadvantage is to use thin membranes instead. This will reduce the amount of Si by more than 99% (dramatically saving in raw materials) and also make the cells flexible and lightweight. As such, these cells can be easily integrated into buildings, urban architecture and even small everyday gadgets. The problem is that such thin Si membranes cannot absorb light as efficiently. In fact, only 25% of the sunlight is absorbed and you can even see through them.

Using a new rationally-designed nanostructure texture, researchers from AMOLF, Surrey University and Imperial College have found a way to make the thin photovoltaic cells opaque and thus enhance their efficiency. In the lab, they found that such textured thin membranes absorb 65% of sunlight, which is very close to the ultimate theoretical absorption limit of ~70%. This is the highest light absorption ever demonstrated in such a thin Si membrane and it is, therefore, likely that flexible, light-weight and efficient Si photovoltaic cells will be developed in the near future.

How does it work?

The patterned nanostructure judiciously re-directs straight sunlight into a range of angles, thereby trapping light inside the Si membrane. With the light being trapped, it has more chances to be absorbed and the thickness of the membrane effectively increases for the light.

By knowing which light angles will trap photons inside the Si membrane, the researchers are able to design their nanopattern based on a state of matter that is often found in nature, from the order of the universe to the distribution of photo-receptors in avian eyes. While hyperuniform distributions and patterns appear completely random, there is some order. As such, hyperuniform designs combine the best of both worlds:

Order allows for judiciously guiding light into very specific angles that are trapped into the membrane based on the periodicity of the pattern. Disorder allows for increasing the breadth of angles that can be achieved with a single pattern, resulting in increased absorption.

The researchers have demonstrated that there is not a unique solution but rather a whole family of hyperuniform pattern designs that all offer high design flexibility without compromising the optical performance. This is very important from the implementation point of view, as not all nanopattern designs can be easily fabricated in a scalable manner.

Two key challenges in trapping sunlight in thin Si are the broad range of colors in the solar spectrum together with the limited dimensions of the membrane. From a photonics perspective, optimizing light guiding and trapping a single color is relatively simple and it can be done efficiently using periodic structures. Sunlight, however, has many colors, each of which experiences a different absorption power in Si.

Thick Si solar cells have solved this issue by roughening the surface with pyramidal features of dimensions similar to those of the wavelengths of light (i.e. up to 1 µm for red light, which is less than 1% of the total Si thickness). However, the same approach won’t work in thin membranes with a thickness of the order of the wavelength of light. The research team circumvented this by capturing the broad span of colors, including the red ones, by patterning only a fraction of the surface of the cell. Such patterning is not just applicable to thin Si, as demonstrated here, but also to any other light absorber thin film that needs extra help to absorb light.

AMOLF group leader Esther Alarcon Llado says that “based on the strong light trapping performance of our patterns, we estimate that PV efficiencies above 20% could be achieved for a 1 μm-thick c-Si cell, which would represent an absolute breakthrough toward flexible, lightweight c-Si PV. Also, thinner Si absorbers are more tolerant to electronic defects compared to the thick counterparts. This means that thin Si cells with high efficiency could also be made from lower grade Silicon, thereby reducing the energy needs for raw Si purification and reducing their energy pay-back time.”

“Hyperuniform patterned thin PV is a highly promising technology. While there is still plenty of work to be done to make such thin high efficiency cells part of our living environment, this work makes us very optimistic that this will happen soon.”