Researchers identify how cells move faster through mucus than blood 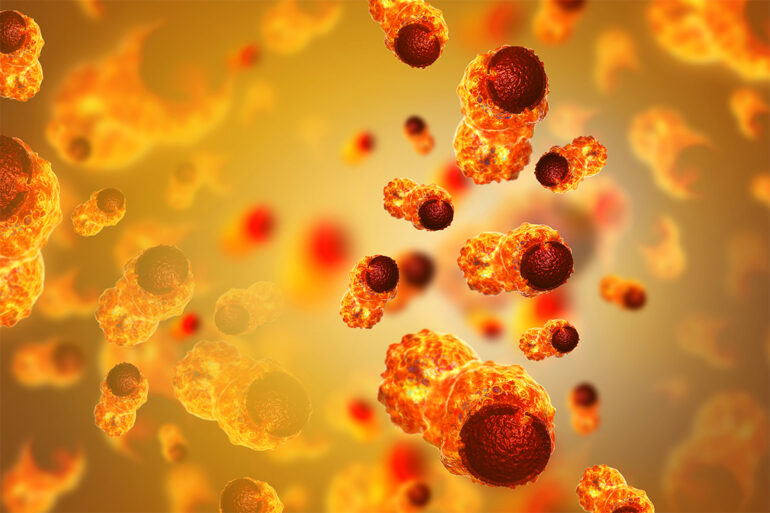 Researchers at the University of Toronto, Johns Hopkins University and Vanderbilt University have discovered that certain cells move surprisingly faster in thicker fluid—think honey as opposed to water, or mucus as opposed to blood—because their ruffled edges sense the viscosity of their environment and adapt to increase their speed.

Their combined results in cancer and fibroblast cells—the type that often creates scars in tissues—suggest that the viscosity of a cell’s surrounding environment is an important contributor to disease, and may help explain tumor progression, scarring in mucus-filled lungs affected by cystic fibrosis, and the wound-healing process.

“This link between cell viscosity and attachment has never been demonstrated before,” says Sergey Plotnikov, assistant professor in the Department of Cell and Systems Biology in the Faculty of Arts & Science at the University of Toronto and a co-corresponding author of the study. “We found that the thicker the surrounding environment, the stronger the cells adhere to the substrate and the faster they move—much like walking on an icy surface with shoes that have spikes, versus shoes with no grip at all.”

Understanding why cells behave in this surprising way is important because cancer tumors create a viscous environment, which means spreading cells can move into tumors faster than non-cancerous tissues. Since the researchers observed that cancer cells speed up in a thickened environment, they concluded that the development of ruffled edges in cancer cells may contribute to cancer spreading to other areas of the body.

Targeting the spreading response in fibroblasts, on the other hand, may reduce tissue damage in the mucus-filled lungs affected by cystic fibrosis. Because ruffled fibroblasts move quickly, they are the first type of cells to move through the mucus to the wound, contributing to scarring rather than healing. These results also may imply that by changing the viscosity of the lung’s mucus, one can control the cell movement.

“By showing how cells respond to what’s around them, and by describing the physical properties of this area, we can learn what affects their behavior and eventually how to influence it,” says Ernest Iu, Ph.D. student in the Department of Cell and Systems Biology in the Faculty of Arts & Science at the University of Toronto and study co-author.

Plotnikov adds, “For example, perhaps if you put a liquid as thick as honey into a wound, the cells will move deeper and faster into it, thereby healing it more effectively.”

Plotnikov and Iu used advanced microscopy techniques to measure the traction that cells exert to move, and changes in structural molecules inside the cells. They compared cancer and fibroblast cells, which have ruffled edges, to cells with smooth edges. They determined that ruffled cell edges sense the thickened environment, triggering a response that allows the cell to pull through the resistance—the ruffles flatten down, spread out and latch on to the surrounding surface.

The experiment originated at Johns Hopkins, where Yun Chen, assistant professor in the Department of Mechanical Engineering and lead author of the study, and Matthew Pittman, Ph.D. student and first author, were first examining the movement of cancer cells. Pittman created a viscous, mucus-like polymer solution, deposited it on different cell types, and saw that cancer cells moved faster than non-cancerous cells when migrating through the thick liquid. To further probe this behavior, Chen collaborated with U of T’s Plotnikov, who specializes in the push and pull of cell movement.

Plotnikov was amazed at the change in speed going into thick, mucus-like liquid. “Normally, we’re looking at slow, subtle changes under the microscope, but we could see the cells moving twice as fast in real time, and spreading to double their original size,” he says.

Typically, cell movement depends on myosin proteins, which help muscles contract. Plotnikov and Iu reasoned that stopping myosin would prevent cells from spreading, however were surprised when evidence showed the cells still sped up despite this action. They instead found that columns of the actin protein inside the cell, which contributes to muscle contraction, became more stable in response to the thick liquid, further pushing out the edge of the cell.

How to explain localized gap modes in Bose-Einstein condensates

The teams are now investigating how to slow the movement of ruffled cells through thickened environments, which may open the door to new treatments for people affected by cancer and cystic fibrosis.