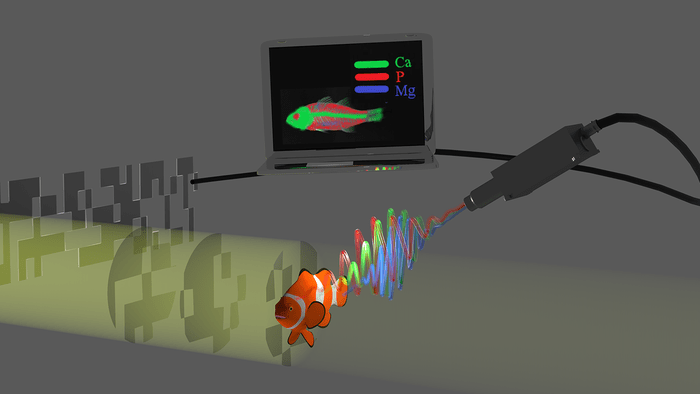 Researchers have developed a new, focus-free technique for creating chemical maps using X-ray fluorescence. The approach offers fast, high-resolution measurements, which could be useful for analyzing chemical composition for a range of applications in biomedicine, materials science, archeology, art and industry.

“Our new method combines the well-known techniques of computational ghost imaging and X-ray fluorescence measurement to create a high-resolution and efficient way to produce chemical element maps,” said research team leader Sharon Shwartz from Bar Ilan University in Israel. “We expect it will allow the chemical mapping of larger objects at higher resolutions than is possible today while also enabling measurement of complex 3D objects.”

In Optica, Optica Publishing Group’s journal, Shwartz and colleagues describe their new X-ray computational ghost fluorescence technique. The approach doesn’t require any focusing and reduces the scanning needed, which significantly shortens measurement time. Also, the fact that it can be tuned to detect specific elements while being blind to human tissues could enable new applications such as full-body security scanners that improve privacy.

“Medical imaging, which is performed at X-ray energies where lenses are not practical, could also benefit from our approach,” said Shwartz. “It could be applied to increase the quality of medical X-ray imaging by boosting tissue contrast or for reducing the X-ray dose necessary to get useful images.”

Seeing beneath the surface

X-ray fluorescence is used to determine the chemical elements within a sample by measuring fluorescence emitted from a sample after it is excited by an X-ray source. The data acquired with this nondestructive analytical technique can be used to create chemical maps that have revealed hidden layers in famous paintings and are used to inspect critical aerospace parts, for example.

Chemical element mapping with X-ray fluorescence traditionally involves focusing the input X-ray beam and then measuring the fluorescence emitted from the area. A chemical map is constructed by scanning the sample point by point and recording the fluorescence intensity at each point. However, this approach is slow because of the scanning required. Also, the spatial resolution of the measurements is restricted by the capabilities of the lenses used for focusing.

“These limitations become even more prominent when X-ray energies higher than 20 keV are used or when trying to acquire 3D information,” said Shwartz. “Although higher X-ray energies could enable chemical mapping of thicker objects or samples containing dense and heavy elements, it’s not possible to use these higher photon energies due to the limitations of standard technologies.”

The researchers turned to computational ghost imaging to remove some of the limitations of conventional X-ray fluorescence analysis. This non-traditional imaging method works by correlating two beams that do not individually carry any meaningful information about the object. One beam encodes a random pattern that acts as a reference and never directly probes the sample while the other beam interacts with the sample.

“Measuring X-ray fluorescence enables us to identify each chemical element based on its unique emission spectrum,” said Shwartz. “By using a detector that can resolve the energies of the emitted radiation, we can identify the contribution of each element to the detected radiation.”

The random pattern required for ghost imaging is typically created by adding a known spatial modulation, or variation, to the intensity of the beam used to irradiate the object. The researchers achieved this by repeating the fluorescence measurements for different input beam intensity patterns.

Putting it all together

The new X-ray computational ghost fluorescence approach produces two sets of data for each photon energy—one with the spatial distributions of the input beam and one with the emitted fluorescence measurements. A computer program then puts these data together and overlays all the imaging data from the various photon energies to create a chemical element map of the object.

Optics and photonics: Miniaturization of diffusers for new applications

The researchers used their new method to create a chemical element map of an object made from iron and cobalt. They showed that using a compressive sensing algorithm reduced the number of scans by almost a factor of 10 compared to standard scanning-based techniques.

“Since our setup is simple and can provide better performance than today’s approaches, we expect that it will open new possibilities in many disciplines including, biology, chemistry, art and archeology,” said Shwartz. “Also, it will be straightforward to extend our method to higher photon energies that are not accessible with present-day methods.”

Next, they plan to apply the new methods to 3D chemical mapping and to demonstrate the applicability of the method for medical imaging.

Provided by
The Optical Society