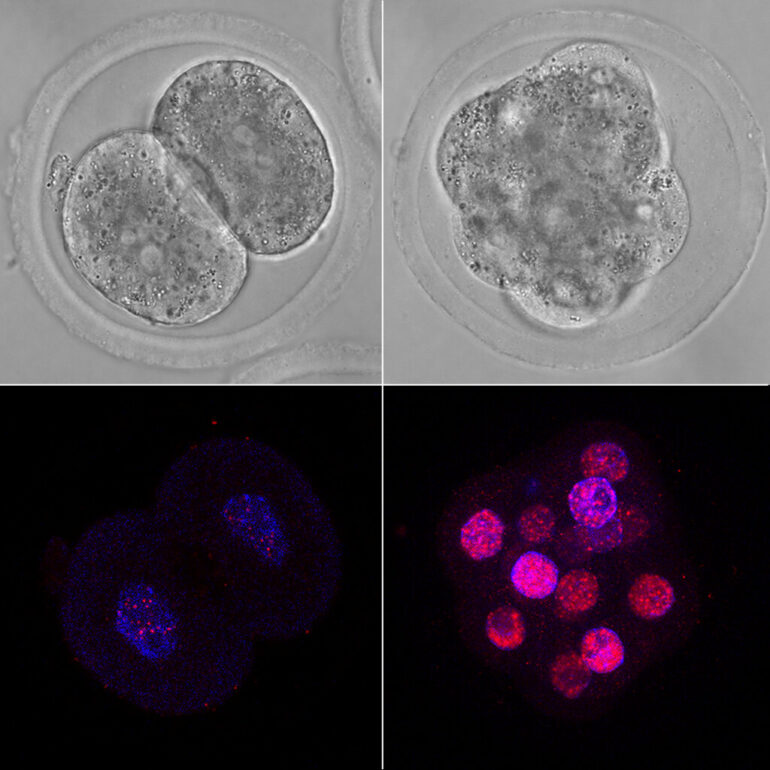 When cities transform into a colorful world of lights as darkness falls, it’s often only possible to estimate their contours, which depending on the perspective can draw the attention to key details or trivia. In fluorescence microscopy, biological cells are marked with fluorescent dyes and excited to luminesce in specific areas by optical switches– like a city at night. However, this light is usually too faint for small, rapid objects, or even goes out after a while. This is known as ” fluorescence bleaching”.

Now, a new approach developed by Prof. Dr. Alexander Rohrbach and his team in the Laboratory for Bio- and Nano-Photonics at the University of Freiburg has found a way to make the smallest objects clearly visible without fluorescence. In this way, cellular structures or virus-sized particles can be observed 100 to 1,000 times longer, ten to 100-times faster and with almost doubled resolution than with fluorescence microscopy. While fluorescence microscopy records what you might call “night-time images” of structures, ROCS microscopy takes “day-time images”—opposites that can complement each other excellently. Rohrbach and his colleagues describe various applications of the technology in the latest issue of Nature Communications.

The technology they use is known as “Rotating Coherent Scattering” (ROCS) and uses a rapidly-rotating blue laser beam. “We are exploiting several physical phenomena familiar from everyday life,” explains Rohrbach, “First, small objects like molecules, viruses or cell structures scatter—or distribute—blue light the most, which is known from the air molecules in the atmosphere and that we perceive as blue sky.” Small objects scatter and direct roughly ten-times more blue than red light particles to the camera and thereby transmit valuable information.

Secondly, ROCS targets a blue laser at a highly oblique angle on the biological objects, because this markedly increases contrast and resolution. This is familiar to us already as well: if you hold a wine glass at an angle to the light it’s far easier to spot dirt or fingerprints. Thirdly, the scientists illuminate the object successively from each direction with the oblique laser beam, because illumination from only one direction would produce a lot of artifacts.

100 images per second of living cells

The Freiburg physicist and engineers from the Department of Microsystems Engineering (IMTEK) rotate the oblique laser beam a hundred times per second around the object and thereby produce 100 images per second. “So in ten minutes we already have 60,000 images of living cells, which turn out to be far more dynamic than previously thought,” says Rohrbach. Dynamic analyses like this demand enormous computing power to process just one minute of visual material, however. Therefore, a variety of computer algorithms and analytical processes first had to be developed so that the data could be properly interpreted.

Together with his colleague Dr. Felix Jünger and in cooperation with various Freiburg research groups, Rohrbach was able to demonstrate the capacity of the microscope using various cell systems: “Our primary aim wasn’t to generate pretty pictures or films of the unexpectedly high dynamic of cells—we wanted to gain new biological insights.” For instance, the ROCS technology enabled them to observe how mast cells open small pores in just a few milliseconds when stimulated, in order to eject spherical granules at an inexplicably high force and speed. The granules contain the transmitter histamine, which can subsequently lead to allergic reactions.

In another series of experiments, the researchers were able to observe how tiny virus-sized particles dance in incredible speed around the rugged surface of scavenger cells, taking several tries to find a binding point on the cell. These observations served as pretests for currently running studies about the binding behavior of coronaviruses.

In addition, the ROCS technology has been used within the collaborative research cluster CRC 1425 about the formation of scars in cardiac lesions. Fibroblasts, that is scar tissue cells, form 100 nanometers thin tubes, so-called nano-tubes, which are 1,000-times thinner than a hair. By this new technology Jünger and Rohrbach were able to discover that these tubes vibrate thermally on a milliseconds scale, but this motion wanes over time. According to mathematical analyses of activity, this indicates a mechanical stiffening of the nano-tubes.

In other experiments the scientists were finally able to observe over many thousands of images how filopodia—the “fingers” of scavenger cells—search their environment for prey using a complex dither movement and how filopodia can alter their cytoskeleton at previously unknown speeds.

Provided by
University of Freiburg